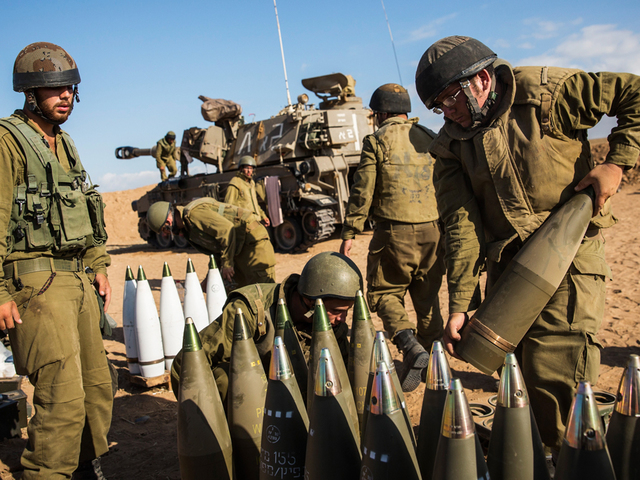 SDEROT, ISRAEL - JULY 17: Israeli soldiers organize artillery shells for firing into Gaza on July 17, 2014 near Sderot, Israel. As the Israeli operation "Protective Edge" enters its tenth day, the body count in Gaza has reach over 200 people. One Israeli has been killed in a Mortar attack. (Photo by Andrew Burton/Getty Images)

The Israeli military deliberately pounded civilian areas in the Gaza Strip with incessant fire of inaccurate ordinance during last year’s war against Hamas and was at best indifferent about casualties among the Palestinian population.

Those are the conclusions of a report complied by Breaking the Silence, an Israeli group that has spent the eight months since the end of the war, known as Operation Protective Edge,interviewing more than 60 members of the Israeli army, air force and navy, including soldiers and officers up to the rank of major.

The service personnel paint a picture that runs counter to official Israeli military claims that the surgical operation – which became a full-blown conflict after three Israeli teenagers were kidnapped and murdered in the occupied West Bank – took great care to avoid civilian casualties and that Gaza’s already fragile infrastructure was not unnecessarily targeted.

International critics of Israeli tactics during the seven-week conflict have argued that the army, the IDF, and the country’s other forces, responded disproportionately to rocket attacks from groups such as Hamas. This, they say, led to 2,220 Palestinians being killed, according to UN figures, the vast majority of them civilians.

There were seven civilian deaths on the Israeli side of the border as a result of rockets fired from inside the Gaza Strip by militant groups. A total of 66 Israeli military personnel were killed. Those Palestinian militants firing rockets across the border could not possibly have known where they were going to land.

This latest report by Breaking the Silence comes not only from within Israel itself, but includes more than 100 testimonies from soldiers who took part in the campaign.

The testimonies include examples of the acts of individual soldiers, including the shooting dead of civilians where those providing evidence say a more measured approach could have been taken. Others talk of incidents where confusion in the midst of a military campaign led to lethal decisions being made when there were other courses of action. A large number of soldiers maintain that the way in which the war was conducted was reasonable, but have decided to speak out against particular decisions or practices.

More worryingly, the report which runs to 240 pages, also details policies and norms – some of which came directly from IDF high command, which Breaking the Silence claims are systematic and led explicitly to greater loss of life and more damage.

“While the testimonies include pointed descriptions of inappropriate behavior by soldiers in the field, the more disturbing picture that arises from these testimonies reflects systematic policies that were dictated to IDF forces of all ranks and in all zones,” the report says.

“The guiding military principle of ‘minimum risk to our forces, even at the cost of harming innocent civilians,’ alongside efforts to deter and intimidate the Palestinians, led to massive and unprecedented harm to the population and the civilian infrastructure in the Gaza Strip. Policymakers could have predicted these results prior to the operation and were surely aware of them throughout.”

Chief among Breaking the Silence’s findings is that the IDF watered down the rules of engagement such that any person in a combat zone was considered an enemy threat.

“Many of the soldiers testified that the rules of engagement they were provided with before the ground incursion into Gaza were unclear and lenient. The soldiers were briefed by their commanders to fire at every person they identified in a combat zone, since the working assumption was that every person in the field was an enemy,” Breaking the Silence claims.

One solider, a First Sergeant in the IDF’s engineering unit who was sent to Gaza City, said: “The briefing on rules of engagement was [to open fire at], ‘Anything you think you should [open fire at]… Anyone you spot that you can be positive is not the IDF.’ The only emphasis regarding rules of engagement was to make sure you weren’t firing at IDF forces, but other than that, ‘Any person you see.’ From the very start they told us, ‘Shoot to kill.’ As far as the IDF was concerned, there wasn’t supposed to be any civilian population there.”

The Israeli air force dropped thousands of leaflets on areas it was preparing to attack, but according to the testimonies, it was assumed that once these leaflets had been distributed, anyone left would be from Hamas, or one of the other militant groups that took part in the war.

Another first sergeant, from an infantry division operating northern Gaza, said that he was told that, “if it looks like a man, shoot. It was simple: You’re in a motherf***ing combat zone. A few hours before you went in the whole area was bombed, if there’s anyone there who doesn’t clearly look innocent, you apparently need to shoot that person.”

A captain, who didn’t want his unit to be publicized, said: “During the briefing with the battalion commander on the night of the incursion, he was asked what the rules of engagement were, how we conduct ourselves, whom we shoot and whom we don’t. What he said was – and this was the general gist of things – ‘We are entering a war zone.’ Meaning, what we prepared for during training – combat in urban areas. The IDF distributed flyers informing the residents of the areas we were entering, and that anyone remaining in the area was in effect sentencing themselves to death. That’s what was said.”

Gaza, measuring about 40km by 10km, is one of the most densely populated areas on Earth with about 1.8 million residents. It is inconceivable that, even at a time of war, entire civilian populations could move to different areas of the strip. Moreover, the crossings between Gaza and Israel, and Gaza and Egypt, were for the most part closed to civilians during the war, meaning that civilians were unable to leave the enclave.

Another central claim by the Israelis was that buildings targeted by its bombers received a “knock at the door,” before they were destroyed. In practice, this was a small missile that caused only marginal damage to a building. The suggestion was that places being used by Palestinian fighters as command centres would receive a warning before they were destroyed, allowing civilians to leave.

During this war, this policy was lauded by the Israelis as a sign that civilian casualties were being kept to a minimum.

“The head of the cell was there for sure, and a decision was made to ’knock on the building’s roof,’ … and then immediately after that drop a bomb on it.”

Asked by Breaking the Silence what he means by “immediately,” the soldier replied: “Not enough time for everyone to leave. Somewhere between 30 seconds and one minute.”

The bombing began on 8 July last year, nine days before Israeli forces entered the Palestinian enclave. Whole areas of Gaza, particularly Shuja’iyya and Beit Hanoun, were flattened during the campaign. Other military personnel interviewed by Breaking the Silence admit that this was part of a deliberate effort by the IDF, and say that inaccurate weapons were used to bombard neighbourhoods before ground troops arrived. “… shells, shells, shells. A suspicious structure, an open area, a field, a place where a tunnel shaft could be – fire, fire, fire. There was a period of about five days from the moment when we were first called in for duty until there was a ground incursion. Throughout that entire time, fire.”

Breaking the Silence has specifically condemned the IDF for the use of what it describes “statistical weapons” – mortars and other artillery that are almost impossible to aim accurately. In such a densely populated area, and where homes are built on top of each other, collateral damage was inevitable, the group argues.

“In practice, during the preliminary shelling, the army pounded populated areas throughout the Strip with artillery shells in order to scare off enemy combatants who were in the area, and at times also to urge the civilian population to flee,” Breaking the Silence say.

Israel won plaudits from its allies in London and Washington for the war was conducted. General Martin Dempsey, the chairman of the US joint chiefs, the United States’ most senior military officer said in November last year that, “Israel went to extraordinary lengths to limit collateral damage and civilian casualties”.

Last week, in an interview with the Jewish Chronicle newspaper, David Cameron made one of his strongest defences of the Israeli position yet.

Using a phrase that was coined by Israeli premier Benjamin Netanyahu, the prime minister said that it was “important to speak out” about standing by Israel and said there was an “important difference” between Israel’s use of weapons to defend itself and Hamas’ use of them “to defend its weapons”.

Other Israeli soldiers interviewed by Breaking the Silence talked about the need to win the propaganda war. The war was characterised by a number of ceasefires that fell apart, and when an Egyptian brokered deal eventually brought an end to the fighting, both the Israelis and Hamas claimed victory.

One soldier described a system by which targets would come with a rating – zero, one and two, to describe the potential loss of civilian life that came with destroying it.

Breaking the Silence argues that its findings justify an independent investigation into the conduct of last summer’s war. The group says each time Israel goes to war in Gaza, the threshold of what is acceptable is pushed up a level.

In a statement the IDF said: “The IDF is committed to properly investigating all credible claims raised via media, NGOs, and official complaints concerning IDF conduct during operation Protective Edge, in as serious a manner as possible.

In a letter seen by The Independent, Breaking the Silence approached the IDF on 23 March. The group wrote to the IDF chief of staff, Gadi Eizenkot, requesting a meeting. “With the completion of the first stage of gathering testimonies from the combatants from Operation Protective Edge, and in the light of the severity of the facts described in the [testimonies], we ask to present the findings to you, urgently,” the letter says.

The group says that it approached soldiers to interview, and that it rejected the testimony of some on the grounds that it was unreliable. Included in that number is a new Israeli MP from Mr Netanyahu’s Likud party, Oren Hazan, who approached the group with the intention of giving false testimony with the aim of discrediting the organisation. Mr Hazan did not take part in the conflict.