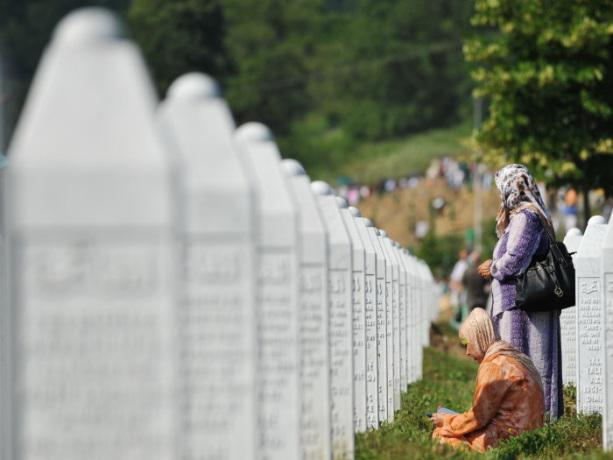 Women pray at a memorial of the Bosnian genocide.

This week, President Obama met with Muslim leaders in a private political meeting for the first time in his six-year presidency. The meeting set off predicatable angry reactions from the political right, with Fox News’ Sean Hannity even saying he wished Obama had demanded that the leaders publicly denounce radical Islam. Obama further raised the hackles of the Christian right when he said at the National Prayer Breakfast that no religion has a monopoly on violence, saying, “And lest we get on our high horse and think this is unique to some other place, remember that during the Crusades and the Inquisition committed terrible deeds in the name of Christ. Slavery and Jim Crow all too often was justified in the name of Christ.”

The reaction to these comments was apoplectic. Rush Limbaugh called it an “insult” to Christianity; the Tea Party News Network said Obama threw “Christians under the bus”; the Daily Caller surmised that Obama’s remarks were designed to “curb” criticism of Islam.

All of these critics failed to engage with the substance of what Obama was saying. The president was not attacking Christianity, he was simply noting that just as ISIS may be using the name of Islam to rally followers to its violent agenda, extremists within the Christian faith have done the same thing historically. Violence has been in the mainstream of Christianity throughout history.

If anything, Obama didn’t go far enough in his remarks. Christianist violence isn’t a relic of the Crusades; it continues today, and in many of its forms is just as violent as what we are seeing from ISIS.

Christian Violence in the Past Century

In the spring of 2013, Middle East historian Juan Cole decided to compare the body counts between violence committed by Christians and that committed by Muslims in the 20th century. He found that Muslim violence has claimed the lives of around 2 million people, mostly during the Iran-Iraq war and the war in Afghanistan, while violence by Christians claimed the lives of close to 100 million people. Here’s what that looks like on a pie graph:

Some of this Christian-led violence is well-known: the World Wars, the Holocaust, the colonial wars in Southeast Asia and Africa. Critics of this analysis would be quick to say that this violence may have been by Christians, but it wasn’t in the name of Christianity. But in virtually every conflict Cole ticks off, the combatants were overtly religious, and often invoked their religion as part of their military campaigns, just as many of the Islamist militants today are not fighting solely due to a religious grievance, but are organized around groups that share a common religious and cultural background.

But religion has played a more explicit role in some of the 20th-century conflicts involving Christians. For example, the 1990 sectarian warfare in the Balkans culminated in an explicit genocide against Muslim Bosnians by Serbian Orthodox Christians. As Balkans researcher Keith Doubt explained in a 2007 paper, the Serbian Orthodox Church was one of the prime movers in the campaign to scapegoat Bosnian Muslims and justify the eventual ethnic cleansing and genocide that took place. He notes that the “role of the Church as protector of the Serbian nation gave the Church increasing social control, and with this power clergy fermented a xenophobic and bigoted attitude towards Muslims in former-Yugoslavia.”

The Church there was so involved in the eventual atrocities it actually dispatched Orthodox chaplins to bless “Serbian forces, such as the elite Panthers commando unit, which has been accused of committing numerous atrocities, before they set off on operations.” The Church would offer “Serb warriors communion without requiring confession,” giving them absolution for the crimes they were committing to create a “Greater Serbia.”

If the Serbian Orthodox Church’s role in the genocide in Bosnia has been forgotten by many, the role of Catholic churches in Rwanda’s genocide is likely even less known. During that mass slaughter, “Churches became sites of slaughter, carried out even at the altar.” One of the figures indicted in the genocide there was Father Wenceslas Munyeshyaka, who used to wear a gun on his hip and colluded with a Hutu militia who massacred hundreds of people seeking shelter in his church. After the genocide concluded, various Catholic clergy actually helped church ministers who were guilty of murder flee the country and re-settle elsewhere, including one who allowed all of the men, women, and children hiding in his church to be killed when the church was bulldozed. The BBC actually ran a story in 2004 of a Rwandan girl who converted to Islam after the genocide because churches actively participated in it but mosques did not.

Months before ISIS’s brutal beheadings were turned into Western headlines, the Associated Press ran a single paragraph on a beheading that took place in the Central African Republic. The paragraph noted, dryly, that a Christian militia there beheaded a young Muslim man, one of the last Muslims left in the village his colleagues had fled. The story ended up in a blurb on page A11 of The New York Times.

Human Rights Watch goes deeper into the situation in a brief published in December 2014:

The vast majority of Muslims in western parts of the country fled brutal attacks by Christian and animist anti-balaka militia in late 2013 and early 2014. Those who were not able to reach Cameroon or Chad became trapped in the enclaves, where they have spent months living in difficult conditions. UN officials, as well as African Union (AU) MISCA and French Sangaris peacekeepers supported evacuations in late 2013  and early 2014, helping thousands of Muslims to seek safety, including in Cameroon. […] By December  2014, an estimated 415,000 people, most of them Muslim, had fled the country and another 10,500 were protected by peacekeepers in a handful of western enclaves – Carnot, Yaloké, Boda, and Berbérati, among others.

In other words, what ISIS is doing to Yazidis and other groups it has deemed the enemy, Christian militias in the Central African Republic are doing to Muslims. We just aren’t hearing about it, because the victims aren’t as easy to relate to as ISIS’s western captives.

Even the ISIS televised executions of journalists aren’t particularly unique to Islamist terrorism. They’re copying a technique pioneered by Christian-led Mexican cartels, who for years beheaded and otherwise assassinated journalists who objected to their agenda. We rarely identify the cartels as Christian in nature, but there are deep financial links between Mexican churches and the cartel organizations.

No Monopoly On Violence

None of this is to argue that Christians are uniquely violent; that would be as wrong-headed as the Fox News argument about Islam’s insidiousness. It is just to point out that any large organization with enough people in it is capable of succumbing to tribalism, to the idea that our group is “good” and other groups are “bad” and should be feared, or disenfranchised, or even killed. That’s as true of Christianity as it is Islam, or Judaism, or Buddhism, or any large-scale ideology or religion. President Obama wasn’t wrong; if anything, he understated his case.