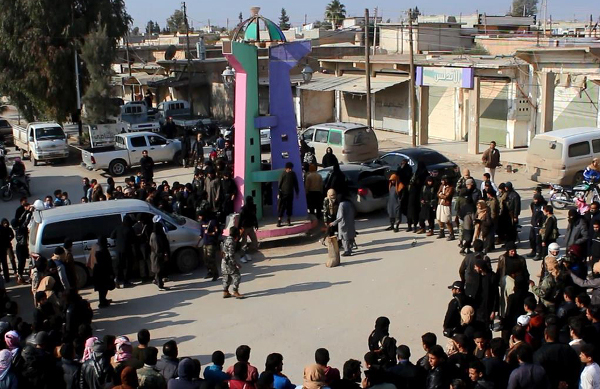 The young football fans had been caught watching the game on television in the Iraqi city of Mosul, which is controlled by the Islamic State.

The teenagers were rounded up and publicly executed by a firing squad using machine guns, anti-ISIS activist group Raqqa is Being Slaughtered Silently reports.

‘The bodies remained lying in the open and their parents were unable to withdraw them for fear of murder by terrorist organisation,’ the group writes on their website.

Raqqa is Being Slaughtered Silently is a small activist collective which secretly documents the shocking violence and oppression ISIS has brought to their home city.

They said the 13 teenagers were rounded up by ISIS militants in the Al-Yarmouk district of Mosul, and executed in public.

The boys’ ‘crime’ – breaking religious laws by watching football – was read out on a loudspeaker before their executions.

The news of the horrifying execution of the teenagers comes just days after ISIS released a video showing two men being thrown off the top of a tower block in Mosul.

Charges found against the accused were announced by a masked Islamic State fighter, using a small handheld radio.

Reading from a list, he declares the men are guilty of engaging in homosexual activities and should be punished by death, in accordance with Islamic State’s radical interpretation of Sharia law.

The Iraq-Jordan Asian Cup game, which took place in Brisbane, Australia last Monday, saw midfielder Yaser Kasim, who plays for Swindon Town in the third tier of English football, give Iraq a 1-0 win.