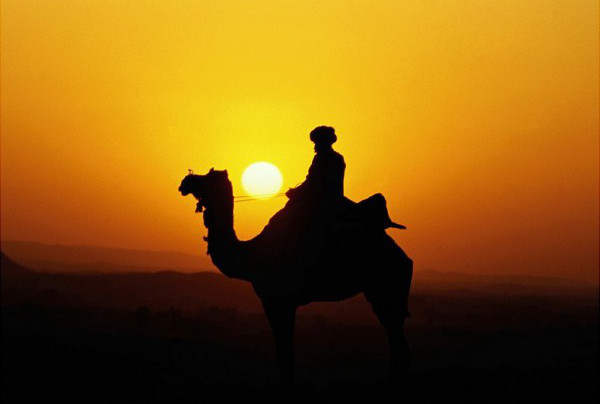 The calendar year was 630. When the Prophet (pbuh) was conversing with his companions in the Masjid Al Nabawi (Prophet’s Mosque), a stranger appeared in front of the mosque. His long knitted hair was hanging from both sides of his head. He was a big strong man. He stepped down from his camel in one swift move. After tying up his camel in the courtyard of the mosque, he confidently marched towards those sitting and asked:

It was apparent that he was not a Muslim because when Muslims addressed the Prophet, they used to go with the title that was given to him by Allah the Exalted, “the Messenger of Allah,” not his name.

The Noble Companions showed him the Messenger of Allah and said:

– Here he is, the person with whitish skin sitting down and leaning against the wall.

The Prophet had no special place in the Masjid Al Nabawi (Prophet’s Mosque), nor did he wear any special item of clothing. He used to sit with his companions as if he was one of them. A stranger who had not seen his rose colored face before would not be able to recognize Him.

The man approached the Messenger of Allah and addressed him with the name of his grandfather:

– O the son of Abdul Muttalib!

The Messenger of Allah responded to his rude addressing:

– Go ahead, I am listening to you.

– I will ask you certain questions. If I ask you extreme questions please do not be offended.

When the messenger of Allah (pbuh) replied:

“I will not be offended, ask whatever you want”, the following conversation took place between them:

– According to the messenger you sent to our tribe, you were saying that Allah sent you as a prophet, I am asking in the name of your Lord and the Lord of those before you. Is it Allah who sent you to all humanity?

– Then, who created these Heavens.

– What about the Earth?

– Allah created that, too.

– Who placed these mountains on the earth?

– You are commanding only to worship Allah by leaving aside the idols and without associating any partners with Him. I am asking in the name of Allah. Did Allah reveal these to you?

– Yes, Allah revealed them to me.

– Say for the love of Allah. Did Allah command you to pray five times a day?

– Say for the love of Allah. Did Allah command you to fast during the month of Ramadan?

– Say for the love of Allah. Did Allah command you to take the mandatory alms (Zakat) from our rich to give to our poor?

The Noble Companions were carefully listening to the logical questions with straightforward explanations that the stranger was asking. The man continued as follows:

– According to what the messenger that you sent to our tribe told us, you are asking that those of us who have the financial means should visit the Kaaba; is that correct?

– Yes, my messenger had told the truth.

– Say in the love of the One who sent you as prophet. Did Allah command you all of these?

The man who received affirmative responses to each question he then stated the following as he looked at the Prophet with the deepest sincerity:

I have faith in all the commands you brought from Allah. I will perform them correctly. I will also stay away from everything you forbid. I am Demam bin Salabah from the tribe of Saad bin Bakr. I came to you as a representative of my tribe. I swear by the name of Allah who sent you as Prophet, I do no more and no less than what you just said.

Demam stood up, untied his camel, hopped on and went back to his tribe. While the Noble Companions were watching behind him with amazement, a sweet smile was seen on the Messenger of Allah. The following good news dropped from his holy mouth:

– If this man with knitted hair is telling the truth, then it means that he has already entered Paradise.