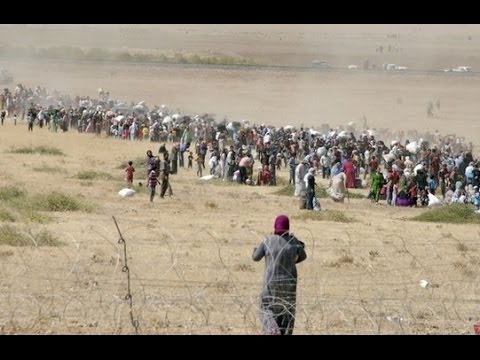 Turkish officials say more than 130,000 Syrian Kurds have crossed into Turkey since late last week in order to flee an advance by Islamic State militants.

Deputy Prime Minister Numan Kurtulmus said Monday the government is expecting the number to rise, and is prepared for “the worst case scenario.”

“We are prepared for the worst scenario, which is an influx of hundreds of thousands of refugees,” Kurtulmus said on Monday in the Turkish capital, Ankara.

Officials pitched tents in the Suleyman Sah Dostluk Park in Turkey, while construction vehicles flattened the ground around the park in preparation for the arrival of more refugees.

The latest influx has come as the Islamic State group pushed into Kurdish areas of northern Syria during the past week.

The expansion north of its stronghold in Raqqa, Syria, adds to the areas where the group has taken control in the eastern part of the country as well as large parts of northern and western Iraq.

Residents fleeing the frontier town of Ayn al-Arab, known in Kurdish as Kobani, and its surrounding villages said the militants were executing people of all ages in the areas they had seized to create a climate of fear and slavish obedience.

The Kurdistan Workers Party (PKK) has issued a call to arms for Turkish Kurds to defend Syria’s border towns.

“We do not fight Kurds because they are Kurds. Rather we fight the disbelievers amongst them, the allies of the crusaders and Jews in their war against the Muslims,” Adnani said, adding that there were many Muslim Kurds within the ranks of the Islamic State fighters.

On Monday, Syrian Kurdish fighters reportedly halted an advance by Islamic State militants to the east of Kobani, a predominantly Kurdish town near the border with Turkey, a spokesman for the main Kurdish group said.

Some material for this report from Reuters and AP.