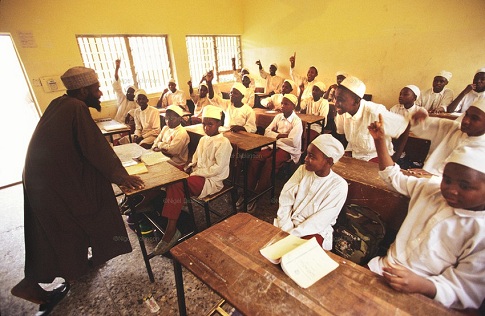 The infamous Boko Haram sect erupted on the world stage in 2009 with their aim to establish an Islamic State. Since their subsequent radicalisation resulting from harsh treatment at the hands of State security forces, they degenerated into harassing innocent civilians, especially school children. Boko Haram’s approach is aligned with certain influential opinion-makers in the Nigerian Muslim states who teach that receiving a modern education is evil and forbidden as the popular name of ‘Boko Haram’ implies. Such education is derisively dismissed as “western education” – synonymous with Christian missionaries and British colonialism. Demonisers of such education are often supervisors of traditional “Qur’anic schools”, which follow a restricted non-contemporary syllabus. These are however, still the mainstay of the education system in the twelve northern ‘Shariah-states’. A strong state-driven modern education system is essential, but a state program, which commenced in the 1970s flounded when oil prices fell abruptly. In the northeast and northwest Muslim zones, 50% of children do not attend formal schooling compared with 20% in southern Nigeria. Consequently, large segments of Muslims cannot participate effectively in Nigeria’s development.

Not surprisingly then in Nigeria, with limited education especially on health and nutrition, an estimated one million women and children die annually from largely preventable causes. Among children these are polio, malaria, measles, bacterial meningitis and malnutrition. This profile is typical of poor countries but if not for corruption, Nigeria should be wealthy from huge exports of ‘sweet’ oil worth 100 Billion US dollars annually. Significantly, although Nigeria ranked fourth in 2012 amongst 27 Muslim countries in religiosity level of its citizens, in terms of social interaction indicators – especially how well the government nurtured weaker societal members such as women, infants and the poor – it ranked a lowly 47 out of 49 Muslim countries. Rejection of a modern education through ignorance also occurs in some other countries. In northwest Pakistan 450 schools were recently destroyed by militants, forcing students to stop attending or study outside amongst the ruins.

Boko Haram and the Pakistan Taliban who target schools because they teach a modern curriculum are clearly wrong. Islam strongly encourages the learning of beneficial knowledge – whether revealed from the Qur’an and Sunnah (Religious Knowledge), or acquired from investigation of the material world (Sciences and Humanities). Prophet Muhammad (PBUH) stressed the obligation to acquire knowledge: “Search for knowledge is a sacred duty imposed on every Muslim man and woman”. Consequently it is the duty of the State to build schools and educational institutions and for parents to facilitate their children’s attendance.  Education for Muslims is not only to provide their frame of reference in Allah’s creation, and knowledge of their fardh obligations for worship, but also facilitates earning a living to contribute to society in a trade or profession.  Scientific knowledge, even about public health or raising children, is essential for a robust society capable of developing Islamic civilisation.  It also will help achieve essential objectives of Islamic law (maqasid al-Shari‘ah) – protection of life, progeny, intellect and wealth of citizens.

Abu Hamid Ghazali (d. 1111CE) considered essential knowledge was not confined to religious sciences but includes the basic sciences. He stressed that this world is preparation for the Hereafter and when worldly affairs are managed well it facilitates one’s success in akhirah. He divided knowledge into fardh ’ayn and fardh kifayah – the latter a collective obligation, which is discharged if some citizens pursue studies to provide community service, e.g. in medicine. Consequently, Al-Ghazali favoured a mixed approach by bringing temporal knowledge within the ambience of fardh kifayah. Professor Mohammad Hashim Kamali, CEO of the International Institute of Advanced Islamic Studies Malaysia, concluded in his book “The Right to Education, Work and Welfare in Islam”, that it is recommendable for the individual, and fardh kifayah on the whole community, to also promote beneficial knowledge outside the sphere of religious sciences.

Hindrance to adoption of scientific knowledge into traditional Muslim religious schools is partly due to modern science having developed largely in the West, where textbooks are prepared and subjects taught from a secular perspective. This does not integrate well with religious education. Science subjects need to be taught from the perspective of a believer in God’s creation. If only textbooks are available from secular sources, an introductory module should first clarify key elements of the Islamic approach, placing subjects in the context of creation and its purpose, inculcating Islamic values and good behavior (akhlaq), and stressing that knowledge should only be applied for mankind’s benefit. Qur’anic references and hadith should be interspersed with the lessons. The International Islamic University of Malaysia is currently working on preparing science textbooks with an Islamic worldview. In northern Nigeria there have been recent improvements with an expansion of urban Islamic public schools teaching a modified national curriculum which also supports the career development of its students.