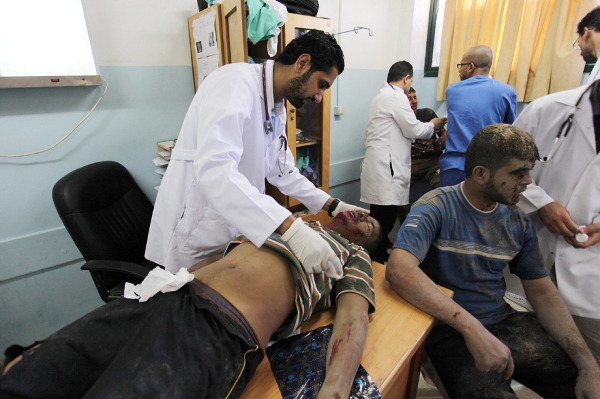 Gaza’s hospitals are in crisis. No drugs, no disposables, no fuel to generate electricity. About the only thing they do have are staff and patients – and thanks to Israel’s current military offensive, there are plenty of the latter.

In the three days since Israel’s Operation Protective Edge was launched, over 250 injured Palestinians have presented for emergency treatment to services lacking such fundamental basics as trolleys and emergency department beds.

Patients arrive in ambulances, vans, private cars, taxis – however they can get there – and are then carried, assisted, or struggle to walk into the emergency department for treatment.

So far 23 percent of them have been children and 18 percent women. These civilians were invariably in or near their homes when destruction rained down on them.

29 homes have been completely demolished, often with entire families inside, such as the Hamad home in Beit Hanoun in which three generations of the family perished, and the Qarare home in Khan Younes which killed seven and left one surviving toddler.

Medical staff are working day and night to provide the best care possible despite the lack of resources – and the lack of salaries. These doctors and nurses have not been paid for several months, and despite the advent of the unity government over a month ago, they have still not been paid.

It is beginning to affect their work. Some are later for their shifts, some cannot get there at all because they live too far away to walk, and they do not have the money for public transport. Some have borrowed from family and friends just to get to work to save the lives of others – even though their own lives are impossible, and even at risk. Already one nurse has been injured on duty, when the European Hospital in Khan Younes was struck by Israeli missiles.

Regardless, the medical staff are there in the front line, receiving the dead and injured, dealing with the horror hour in and hour out, with no rest or reward but the knowledge that without them many more would suffer, and die.

With a stoicism and patience found only in Palestine, they wait for the arrival of essential drugs from the West Bank – the promised supplies from the unity government that should have arrived a week ago, but that have never materialised – like their salaries.

With 25 percent of essential medicines now at zero stock, and another 15 percent which will be zero within days, they wonder how they will treat the patients that keep pouring through the doors after every Israeli bomb, missile, mortar, or rocket hits another home, car or motorbike and wreaks havoc on the lives and limbs of those beneath it.

They wonder will they be the next to be killed – or will it be their child that becomes another digit added to the 35 already killed since Monday, 18 percent of whom are children. Will their wife, mother, sister, aunt, grandmother add another percent to the 6 percent of women in the death toll to date?

They wonder will their hospital be next to be targeted, knowing full well that neither the Geneva Convention nor any other piece of UN paper has ever, or will ever, protect them from Israel’s terrorist rampage through their lands and lives, let alone bring a measure of justice after the event.

They wonder will help ever arrive – the medicines they need, the supplies like sutures to stitch back together the flesh torn apart by shrapnel, the spare parts to fix the instruments and devices necessary to diagnose and treat, even just the fuel to run the generators to light the operating theatres and keep them functioning.

“We need all people, all societies to do something to stop the Israeli aggression that is killing children, women, the elderly,” pleaded Dr Nasr Altatari, General Director of Gaza’s largest medical complex Shifa.

“All countries and societies, please send us drugs, disposables, fuel, spare parts so we can provide proper care for the injured.”

As Dr Nasr returns to compiling his growing list of fast-diminishing stocks, we leave to the sound of screaming sirens as several ambulances arrive with yet another load of dead and injured for the already over-burdened services to deal with… and drones circle overhead like birds of prey lining up their next kill.