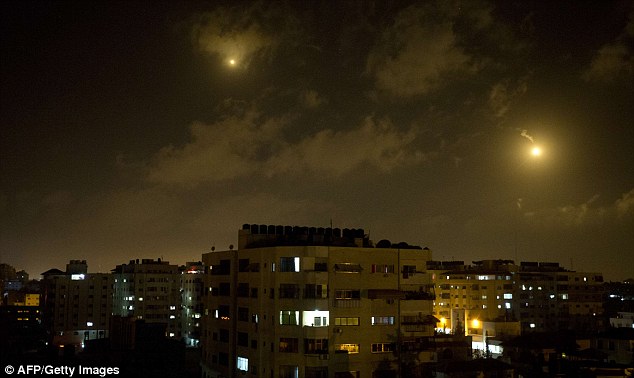 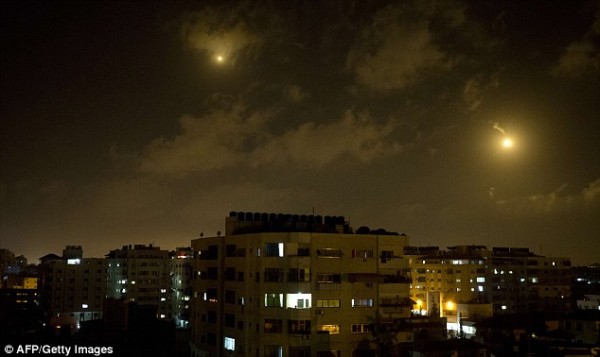 Israel launched dozens of air raids on the Gaza Strip overnight Tuesday in prepartion for a possible ground invasion to halt militant rocket attacks on Israel.

The Israeli army said about 50 objects, including houses and rocket-launch sites, were targeted in what it called “Operation Protective Edge.”

An Israeli army spokesman said the aerial and naval assaults were preparation for a possible ground invasion of Gaza, if needed, to halt militant rocket attacks.

Israeli tanks and other armored vehicles were seen massing near the Gaza border Tuesday, and a military spokesman said the army was recruiting reserve troops for a potential ground mission.

Meanwhile, President Barack Obama is urging Israelis and Palestinians to “act with reasonableness and restraint” at what he called a dangerous moment between the two sides.

In an article published Tuesday in the Israeli newspaper Haaretz, Obama said the two sides must protect the innocent and not use “vengeance and retribution.”

He also said he still believes it is possible for Israel and the Palestinians to achieve peace, saying that peace is the only path to security in Israel.

Meanwhile, the Israeli military is continuing a campaign of airstrikes in the Gaza Strip that Palestinians said injured at least nine people on Tuesday.

Israel says the bombing is in response to rocket fire from Gaza, including eight rockets that hit southern Israel early Tuesday and more than 80 fired at Israel on Monday.

U.S. State Department spokeswoman Jen Psaki said Monday that Secretary of State John Kerry has spoken with leaders from both sides in recent days, reiterating the need to reduce tensions and violence.

“Anytime there are rocket attacks into Israel, we certainly condemn those and we would do so in this case as well.  And there’s no place for violence and increasing tension as we’re seeing on the ground.  We don’t feel that’s productive to a peaceful society,” said Psaki.

The kidnapping and killing of three Israeli teenagers and a Palestinian youth helped to further escalate tensions in the past week.  Both Israeli Prime Minister Benjamin Netanyahu and Palestinian President Mahmoud Abbas have condemned the acts and vowed to punish those responsible.

Israeli investigators said Monday that three of six Jewish suspects accused of killing 16-year-old Mohammed Abu Khdeir have confessed to the crime and re-enacted it for authorities. It is believed the Palestinian was killed as revenge for the deaths of the Israeli teens.

Israel called up hundreds of reservists in anticipation of more clashes with Hamas, which it blames for the killing of the Israeli youths.  Hamas has denied responsibility.