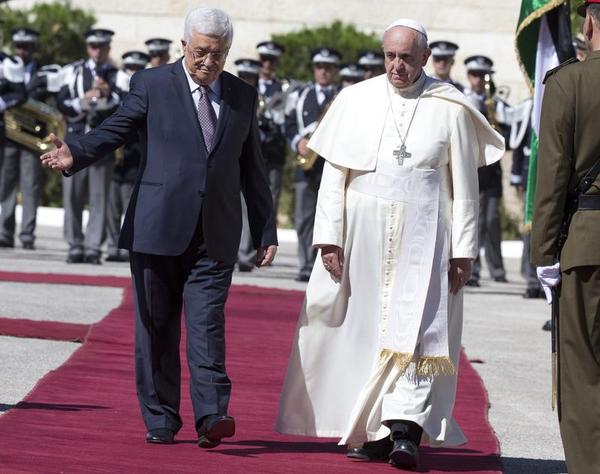 The night before, in a stunning upset, New York Mayor Ed Koch had been defeated in the Democratic primary for governor of New York by Lieutenant Governor Mario Cuomo.

At the morning staff meeting, AIPAC’s executive director sternly asked the staff. “how did we let that happen?”

We?  What in heaven’s name did the governorship have to do with Israel?

Nothing, of course. But we are talking about New York. AIPAC donors could at least try to defeat Cuomo in favor of the Jewish candidate so why not at least try?  After all, the NRA gets involved in ensuring that their candidate wins Betty Crocker baking contests at the Iowa State Fair.

And that seems to have happened again. Pope Francis, the liberal (except of course on matters relating to women and gays) new head of the Mother Church, yesterday spoke about the “State of Palestine,” which is something the government of Israel and its lobby does not permit.

It shouldn’t be a surprise, Pope Francis is the most progressive pontiff since John XXIII and if you are a progressive, supporting the rights of Palestinians (along with Israelis) should be a given. Except if one has to worry about AIPAC and the American Jewish Committee (which holds the Vatican portfolio for AIPAC),  But Francis uttered the word: Palestine.

What an epic fail for the lobby. What next? Will Kentucky Fried Chicken now list its restaurants in Ramallah and Nablus as being located in some “State of Palestine?”

That means defeating cardinals (the guys who choose the pope) who stray from the AIPAC line the next time they are on the ballot. Surely it can be done.

I mean they must have to run in primaries or something. Or caucuses at least. Maybe some represent dioceses where Sheldon Adelson has a casino or Alan Dershowitz once defended a criminal priest.

This 20 second video featuring a very senior AIPAC official explains how it can be done. He says  that just as the lobby takes out members of Congress who deviate from the line, it can do the same with college officials… like,the College of Cardinals.

Watch this Pope Francis and tremble. AIPAC is watching at https://www.youtube.com/watch?v=7VDYGLY1WBQ