Home » Featured » The Peace Process: “let them stew in their own juice”

The Peace Process: “let them stew in their own juice” 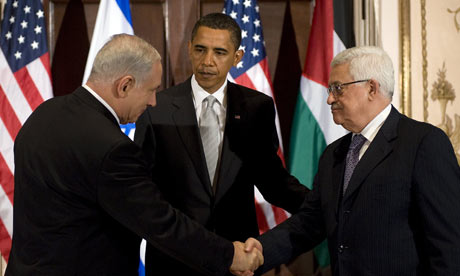 According to press reports, President Barack Obama has decided to let Binyamin Netanyahu and Mahmoud Abbas “stew in their own juice.”

The United States has tried very hard to make peace between Israel and Palestine. Poor John Kerry has devoted almost all of his considerable energies to getting both sides to meet, to talk, to reach compromises.

At the end of nine months, he found out that it was a false pregnancy. No baby, not even a fetus. Nothing at all.

So American leaders are justified in feeling angry. Angry at both sides. Neither of them has shown any willingness to sacrifice its interests in order to do a favor to Obama or Kerry. Ungrateful, these Middle Easterners herunterladen.

So it seems that the reaction is justified. You don’t want to fulfill our wishes? Go to hell. Both of you.

The important word in these sentences is “both”.

Israel is immeasurably stronger than Palestine in every material respect. One resembles a sleek American skyscraper, the other a dilapidated wooden shack.

Palestine is under occupation by the other half of “both”. Palestinians are totally deprived of all elementary human and civil rights. Average income in Israel is 20 times higher than in Palestine liederen pc. Not 20%, but a staggering 2000%. Militarily, Israel is a regional power, and in some respects a world power.

In this reality, speaking of “both” is at best ignorant, at worst cynical.

The very presentation of this picture of “both” is tantamount to acceptance of the Israeli narrative.

What does it mean for “both” to stew in their own juice?

For Israel, it means that it can continue to build new settlements on Arab land in the occupied West Bank without foreign interference. It can make life in the West Bank and the Gaza Strip ever harsher, in the hope that more and more Palestinians will prefer to leave. Arbitrary killings of civilians by occupation troops occur every few days.

Some of us realize that this course is leading to disaster in the form of a bi-national state, in which an ever-growing disenfranchised Arab majority will be ruled by the Jewish minority tiptoi railway download. That is called apartheid. But most Israelis don’t see it.

Israelis are happy, and never happier than this week. In a modern repetition of the Biblical David-and-Goliath story, the Tel Aviv Maccabi basketball team beat the formidable Real Madrid team for the European championship. National pride has risen to Olympic heights. (In a childish race, President Peres and Prime Minister Netanyahu each tried to waylay the winning team on its way to the popular reception in Rabin Square, in order to bask in reflected glory.)

So Israel can stew happily, the more so since the US continues to pay us their annual three billion dollar tribute, provide us with arms and use their UN veto power to protect us from international censure.

For the Palestinian side of “both”, stewing in their own juice means something very different.

The effort to achieve Fatah-Hamas reconciliation proceeds slowly and can break down at any moment. It depends on Abbas’ success in forming a Unity Government composed of impartial “technocrats” and Hamas’ willingness to give up its sole rule in the Gaza Strip herunterladen.

Almost all Palestinians want unity, but ideological differences run deep (though in practice the differences are now much shallower). But even if some kind of unity is achieved and recognized by the international community against Israel’s wish, what can the Palestinians actually do without violence?

They could, with the help of Saudi Arabia and the military junta in Egypt, establish some direct contact between the West Bank and Gaza and break the Israeli blockade on the Strip.

They can apply for admittance to some more international agencies and for more positive resolutions of the UN General Assembly, where the US veto does not apply but whose decisions have very little concrete effect.

They can encourage European countries and the international BDS movement to reinforce the boycott of the settlements or of Israel itself.

Altogether, not very much block flute notes for free download. The stewing period will enlarge even more the imbalance of power between “both” parties.

If the stewing lasts long enough, the “moderate” leaderships of Fatah and Hamas will be swept away, and Palestinian violence will raise its head again.

Conclusion: “Bothness”, which looks so fair and impartial, is in effect a policy of 100% support for the Israeli Right.

Will this strengthen anti-Israeli sentiment abroad?

Two weeks ago, a US Jewish organization dropped a bombshell: in every country around the world there exists anti-Semitism, from 91% in the West Bank to 2% in Laos. (One may wonder where Laotians find Jews to hate.)

The organization which invested so much money to finance such a world-wide poll is the (Anti-)Defamation League. I put the “anti” in brackets, because its proper name should be the Defamation League. It is a kind of Thought Police in the service of the right-wing American Jewish establishment.

(Many years ago, when I was a Member of the Knesset, I was invited to give talks at 20 high-class American universities. The hosts were the Jewish chaplains who belong to the Bnei Brith (Beit Hillel) order. At the last moment, 19 talks were canceled. In a secret letter, the Defamation League had told the chaplains that “though MK Uri Avnery cannot be called a traitor…” etc. etc. In the end, all the talks took place under the auspices of Christian chaplains.)

The publication of the devastating results of the poll exposed a curious fact: news about the rise of anti-Semitism is received by many Jews with something strangely like joy bendy herunterladen.

I have often wondered about this phenomenon. For Zionists, the answer is simple: the terms anti-Semitism and Zionism, like Siamese twins, were born at the same time. Anti-Semitism has always driven Jews to Israel, and still does (lately from France).

For other Jews, the source of the joy is less obvious. Jews in Europe have been surrounded by anti-Semites for so long, that the sight of them seems normal. Discovering them again and again gives Jews a comfortable feeling of familiarity.

And there are, of course, the innumerable employees of the League and the other Jewish organizations, whose livelihood depends on the exposure of anti-Semites.

The interpretation of the poll itself is, of course, complete bullshit (sorry). People who expressed misgivings about Israeli policy were listed as anti-Semites skype for business download mac for free. So are all inhabitants of the occupied territories who do not like their occupiers. Muslims in general, who see Israel in a negative light, are of course racists. A similar poll about anti-Russian racism may well achieve the same results in Ukraine.

A similar initiative is this week’s congress of the International Association of Jewish Lawyers and Jurists.

Jewish jurists may sound almost like a tautology. Every Jewish mother wants to boast of “my son, the doctor” or “my son, the lawyer”. In the US and many other countries, Jewish lawyers and judges seem to be in the majority.

This meeting has a specific aim: to convince the UN to abolish UNRWA, the UN agency concerned with Palestinian refugees. It was created after the 1948 war, during which some 750,000 Palestinians fled or were driven out of the territory that became Israel pokemon alpha saphir kostenlos downloaden. Their descendents, who are also recognized as refugees, amount now to some six to seven million.

UNRWA feeds these refugees, protects them and educates them. It is true that it is a unique institution, expressing the bad conscience of the UN. It seems that the refugees from no other country have such a specific organization to care for them.

Now the Jew-Ju’s (if I may call them so) are mounting an attack, directly guided by Israel, to abolish this organization altogether. I suppose that the aim is to disband the Palestinian refugee camps which exist in several countries around Israel – Sabra and Shatila spring to mind – and disperse the refugees all over the planet, where they will be less of a pain in the neck for the Netanyahu government.

All THIS in the name of fairness and equality. Israelis and Palestinians can “both” stew in their own juice.