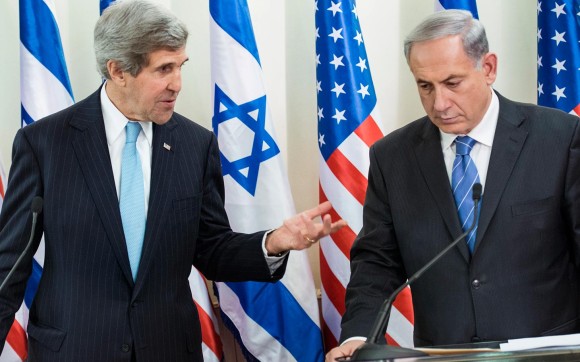 U.S. officials blamed Israel’s “expropriating land on a large scale” to build colonies “on the territory meant for that [Palestinian] state” as the “primary” reason for the recent negotiations’ failure, in a must-read Ynet interview with historic implications. This rare moment of honesty from anonymous officials of the dishonest broker stands in sharp contrast to the collapse of the Barak/Arafat Camp David talks, following which Israel’s apologists seized on the Clinton administration’s blaming of Arafat to disseminate the Myth of the Generous Offer.

Finally, for the first time in the history of the U.S. being Israel’s lawyer, the superpower has copped to one of the fundamental flaws of the peace process: one cannot negotiate over a pizza with a bully while the bully devours the pizza! “What they told me is the closest thing to an official American version of what happened,” writes Nahum Barnea. Put more plainly, indigenous people who are being oppressed by a colonial power cannot negotiate with the colonial power while the colonial power continues to steal, ethnically cleanse, and colonize their land.

“Only now, after talks blew up, did we learn that this is also about expropriating land on a large scale,”

A credulous U.S. official complained, going much farther than any comment Sec. Kerry has made either on or off the record. Apparently the unnamed officials haven’t been reading Electronic Intifada, Haaretz, +972mag, our site,  or any of the other publications that might have informed them of this reality long ago.

“I guess we need another Intifada to create the circumstances that would allow progress,”

One anonymous official asserted, clarifying that while they don’t want that to happen, the lack of a ‘sense of urgency’ necessitates one. Perhaps a way to interpret this comment is the recognition that the current balance of power so drastically favors Israel, that only if the state came under extreme pressure — for example, through a massive popular uprising (let’s think Intifada I, which was largely nonviolent) and a huge increase in international support for the BDS Movement — would Israel make the concessions necessary for negotiations to lead anywhere meaningful.

Of course, never did the unnamed U.S. officials speculate that cutting U.S. military aid to Israel might help create a ‘sense of urgency,’ nor did the U.S. officials acknowledge their own role as a dishonest broker being one of the main causes of the talks’ failure.

If indeed April 29th 2014 marked the end of the 20-year-long period of the U.S. inserting itself as the sole mediator of Israeli-Palestinian negotiations, the charge that settlement construction ‘very effectively sabotaged’ this round of talks will, in historical retrospective, indict Israel’s responsibility for the collapse of the entire ‘Peace Process’ and the Oslo era, which for 20 years has been nothing more than a smokescreen for Israel to confiscate more Pieces of Palestinian land.

In response to the interviewer’s tired rejoinder, “The world is being self-righteous. It closes its eyes to China’s takeover of Tibet,” the officials responded, ”Israel is not China. It was founded by a UN resolution. Its prosperity depends on the way it is viewed by the international community.”

The officials might have added that Israel’s admission into the UN was contingent on its implementation of the right of Palestinian refugees’ return to their homes, which it has flagrantly ignored and violated.

Eyebrow-raising excerpts follow. Read the entirety of this landmark article, now; I wouldn’t be surprised if Israeli gov’t officials attempt to pressure Ynet to reword or even scrub this article, containing as it does perhaps the most strident U.S. criticism of Israeli policies of in many years. Also check out Larry Derfner’s take at +972.

“The negotiations had to start with a decision to freeze settlement construction. We thought that we couldn’t achieve that because of the current makeup of the Israeli government, so we gave up. We didn’t realize Netanyahu was using the announcements of tenders for settlement construction as a way to ensure the survival of his own government. We didn’t realize continuing construction allowed ministers in his government to very effectively sabotage the success of the talks.

There are a lot of reasons for the peace effort’s failure, but people in Israel shouldn’t ignore the bitter truth – the primary sabotage came from the settlements. The Palestinians don’t believe that Israel really intends to let them found a state when, at the same time, it is building settlements on the territory meant for that state. We’re talking about the announcement of 14,000 housing units, no less. Only now, after talks blew up, did we learn that this is also about expropriating land on a large scale. That does not reconcile with the agreement.”

“At the end of a war there is a sense of urgency,” they said. And then one of them added bitterly: “I guess we need another intifada to create the circumstances that would allow progress.

“20 years after the Oslo Accords, new game rules and facts on the ground were created that are deeply entrenched. This reality is very difficult for the Palestinians and very convenient for Israel.”

“Abbas watched how Oslo opened the door to 400,000 Israelis to settle beyond the Green Line. He wasn’t willing to bear it anymore.”

“One of the Palestinians who participated in the talks told an Israeli participant: ‘You don’t see us. We’re transparent, we’re hollow.’ He had a point. After the second intifada ended and the separation barrier was built, the Palestinians turned into ghosts in the eyes of the Israelis – they couldn’t see them anymore.”

“The international community, especially the European Union, avoided any action during the negotiations. Now, a race will begin to fill the void [created by the collapse of the U.S.-led Peace Process]. Israel might be facing quite a problem.”

“Abbas’ conditions were rejected out of hand by Israel. Perhaps someone in Israel will reconsider their positions? Why is a three-month settlement construction freeze such a big deal? Why not draw a map? You have a great interest in an accord reached by mutual consent, rather than one reached as a result of external pressures. Drawing a map should’ve been stage one.”