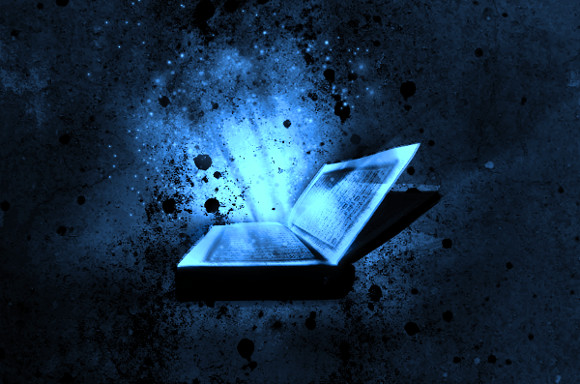 First of all, you should know that knowledge of the unseen is the privilege from Allah Most High, and that its appearance on the tongue of the Messenger of Allah and others comes from Allah (swt) either through revelation or through inspiration. The Prophet said in the hadith: “I swear it by Allah! Truly I know nothing except what my Lord taught me.”1[] So everything that came to us from him consisting in news of the unseen is nothing other than the Divine disclosure to him as a proof for the actuality of his Prophethood and its truth.

In other words, as expounded at length by Shaykh Ahmad Rida Khan, the Prophet’s `ilm al-ghayb is partial (juz’i), non-exhaustive (ghayr ihati), bestowed (`ata’i) and not independent (ghayr istiqlali) as established once and for all by the Qur’anic verse {the knower of the Unseen, and He reveals unto none His secret save unto every messenger whom He has chosen} (72:26-27).

Al-Nabahani said: The listing of the miracles in this chapter cannot be exhausted because of their large number and the fact that they took place at his hands in most of his states, whether they asked him questions or not, whatever circumstances dictated. These are the most numerous of his stunning miracles Al-Qad.i `Iyad. said in al-Shifa’: “His knowledge of the unseen counts among those miracles of his that are known categorically and definitely, coming to us through mass transmissions with a vast number of narrators and congruent meanings.”[2]

The Prophet’s familiarity with and knowledge of the unseen was a well-known and universally recognized fact among both the believers and the unbelievers to the point that one of them would say to the other, “Hush! By Allah, even if there is none among us to tell him, the very stones and pebbles would tell him.”[3] Al-Bukhari narrated from Ibn `Umar (ra): “We kept away from conversation and leisurely talk to our women lest some revelation come down concerning us. After the Prophet died we spoke more freely.”[4] Al-Bayhaqi narrated from Sahl ibn Sa`d al-Sa`idi (ra): “I swear by Allah that some of us would refrain from doing something with his wife as he and she lay together under the same sheet for fear some Qur’anic revelation should come down concerning them.”[5] `Abd Allah ibn Rawah.a said (ra):

Among us is the Messenger of Allah reciting His Book
As the radiant light cleaves the true dawn’s sky.
He showed us guidance after blindness and our hearts
Now firmly know that all he says will take place.[6]

A Prophet who sees around him what others do not
And recites the Book of Allah in every assembly!
If he says something of a day which he has not yet seen
What he says is confirmed on the morrow or the next day.[7]

The above two quatrains put to rest the odd claim of the author of Taqwiyat al-Iman that the Prophet did not know what would happen on the next day on the grounds that he said, “Avoid saying this” to the slave-girl reciting poetry when she said, “Among us is a Prophet that knows what happens tomorrow.”[8] The reason for this order is not because he did not know – since it is established that Allah (swt) is {the knower of the Unseen, and He reveals unto none His secret save unto every messenger whom He has chosen} (72:26-27) and that He revealed to the Prophet knowledge of the future until the Day of Judgment and much of the Hereafter as well – but because knowledge of the unseen was attributed to him in absolute terms when only Allah knows the unseen in absolute terms.[9] Coming from the mouth of a child not yet qualified to pray,[10] such an assertion was reminiscent of the popular belief unbecoming of a Prophet but typical of the false claims of seers, oracles, astrologers etc. that they could, of their own devices, know the future, to which Allah (swt) said (No soul knoweth what it will earn tomorrow) (31:34). Hence, the Prophet , in one version, added by way of explanation, “Only Allah knows what happens tomorrow”[11] i.e. independently of anyone and with an absolute knowledge.

1 When the camel of the Prophet was lost during the Tabuk expedition he asked people for its whereabouts, whereupon one of the hypocrites [Zayd ibn al-Las.it al-Qaynuqa`i] said, “Here is Muh.ammad to whom come news from the heaven and he knows not where his camel is.” At this he praised Allah then said: “A certain man said such-and-such. Truly, I do not know anything except what my Lord taught me, and He has informed me that the camel is in such-and-such a vale with its reins entangled in a tree.” The people ran and found it. Narrated from the Companions Mah.mud ibn Labid and `Umara ibn H.azim by Ibn Ish.aq in al-Maghazi as stated by Ibn Hisham in the Sira (5:203) and al-T.abari in his Tarikh (2:184); Ibn H.azm in al-Muh.alla (11:222) and Ibn H.ajar in Fath. al-Bari (1959 ed. 13:364) and al-Is.aba (2:619), while Ibn H.ibban cites it without chain in al-Thiqat (2:93). Also narrated by al-Taymi in Dala’il al-Nubuwwa (p. 137) citing Ibn Qutayba’s report. The segment quoted by al-Nabahani is also narrated from `Uqba ibn `Amir by Abu al-Shaykh in al-`Az.ama (4:1468-1469 #96714) as part of a longer narration that includes: “I shall inform you of what you came here to ask me about before you tell me and, if you wish, you can speak first then I will answer you… You came to ask me about Dhu al-Qarnayn….” The camel of the Prophet was similarly lost and found in the expedition of H.udaybiyya.

4 Narrated from Ibn `Umar by al-Bukhari, Ibn Majah, and Ah.mad.

9 As stated by Ibn H.ajar in his commentary of this narration in Fath. al-Bari.

10 As stated by Ibn al-Qayyim in his marginalia on Abu Dawud’ Sunan.

11 In Ibn Majah with a fair chain.