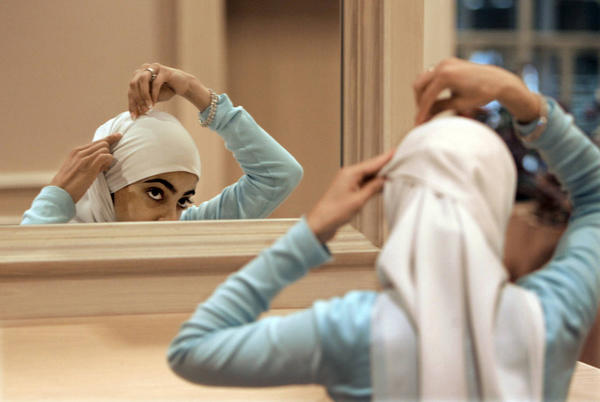 What you wear says a lot about who you are.

It also affects the way people perceive you and treat you.

Allah says in the Quran what means:

{O Prophet! Tell your wives and your daughters and the women of the believers to draw their cloaks (veils) all over their bodies. That will be better, that they should be known so as not to be annoyed. And Allah is Ever Oft Forgiving, Most Merciful.} (Al-Ahzab 33:59)

No one likes to be treated like a piece of meat or a commodity. People like to be listened to and respected for what they believe, what they say, and who they are, not just for how they look.

When a woman wears hijab and behaves accordingly (modestly and with morality), she is a living, walking symbol of womanhood. It is as if she is saying that she is not available for anyone to leer at, that she has a mind and knows who she is and where she is going.

Wearing hijab is a part of obeying Allah because it was ordered by Him. And Allah, being the Creator of all things, knows the nature of men and women and what they need to enable them to live lives of morality and happiness. So when you wear hijab for God’s sake, you are eligible to receive a reward from Him. The light of inner peace is often the sign of Allah’s reward on a woman who wears hijab for His sake. There is a look of calm, steadfastness, and inner strength. There is also a look of elegance in the long sweeping clothes that have been characterized throughout the ages with pious women.

Think about how the Virgin Mary is portrayed. Think about Mother Theresa and many other nuns. They wear what the Muslims call hijab. So by wearing hijab you are not being different so much that the others in society are not following the example of the pious women from their religions.

When a Muslim woman starts to wear hijab, she will change many things about herself. First of all, she will change how she perceives herself. When she is ready to go out, she will examine her inner intentions and the state of her heart as well as what she is wearing. Are her clothes long? Loose? Not transparent? Is she going out with the intention to lure and attract men or to simply go about her business and live her life?

Some Muslim women do not start to wear hijab until later in their lives. Sometimes this is because they were not brought up to understand Islam. Others do not reach this level of understanding and spiritual strength until a later time. Anyway, such women go through much the same experience as new Muslims.

One sister told me that she had always loved wearing big bright earrings and that it had become a part of how she perceived herself. When she first started wearing hijab she struggled with it until she could wear it while still showing her earrings. This was important to her for some time. But as she began to mix with women who did not value themselves and each other based on their looks but on the state of the heart and their obedience to Allah, her earrings began to look more and more pitiful to her and it became easy for her to tuck them under her scarf and just be herself.

Another sister told me that her hijab grew over a period of time. She started to cover and wear clothes that were somewhat longer than the ones she used to wear. Again there was a big impact on her from the women she mixed with who wore hijab and encouraged her to do her best to obey Allah and follow His guidelines. She told me that the more she wore hijab, that is, the more she covered, the stronger and more peaceful she felt.

This is the part of wearing hijab that has to do with the person individually. When you start to dress like this, you will have to discover and develop your own self-confidence and keep your faith strong so you can overcome your fears (usually of not being accepted) and the comments and actions of other people. This is a big test.

Another one of my friends had a trying experience from her family who did not accept Islam along with her. Her mother was furious and could not understand why my friend would want to enter Islam. When my friend started to wear long clothes and a scarf, her mother was even more furious. She started to threaten her daughter that if she did not start to wear the kind of clothes she had worn previously she would be sorry.

My friend had firm faith and kindly but with strength explained to her mother that this was the path she had decided to follow and why should it bother her (the mother) that her daughter wanted to be a pious woman? Would she prefer her daughter to be promiscuous? The mother did not know what to say but remained stubborn nevertheless. Then one day when my friend was visiting her mother, she took a pair of scissors and cut up my friend’s hijab and laughed asking what was she going to wear outside now.

My friend did not say anything but went to the linen cupboard and took out anything that was the appropriate size and put it on her head. Her mother was astonished and rather disappointed because she much preferred her daughter to be seen by the neighbors wearing her relatively nice scarf than a ridiculous-looking pillowcase. Anyhow she wore the pillowcase outside and went home wearing it and her mother remained silent on the issue thereafter.

Wearing hijab does not mean you will never face challenges. It is like all the other things we are expected to do; they all require an element of determination and a lot of faith.