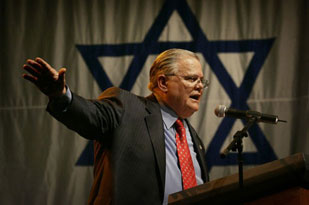 I am always amused when I hear people say that right-wing Christian fundamentalists are part of the Israel Lobby, that Congress is just as intimidated by them as they are by AIPAC and its satellite organizations.

Yes, millions and millions of fundamentalists may “support” Israel (not Jews, mind you, who they rightly consider to be dangerously secular) but their support, such as it is, is meaningless.

Here’s why. Christian fundamentalists do not vote based on Israel. As you can see on any of their websites, their voting issues are guns, abortion, gays  and a host of other issues designed to bring America “back” to the ethnically pure Christian republic of their dreams. These days, looming over all else, is their hatred for America’s first black president. They “pray” against  Israel’s “enemies”  but they mobilize against Obama, Obama, Obama.

Even more significantly, they do not give money to candidates based on Israel. In fact, unlike Jews, they are not big on giving money to politicians at all, allowing people like the Koch Brothers and the gun manufacturers to do it for them.

On top of that, their votes are never in play, Christian conservatives vote Republican. And they will continue to as long as the Democrats are the party of minorities, labor unions, gays, gun control, immigrants, environmentalists, and empowered women. (A corollary to this is that the lobby concentrates its efforts on Democrats, who are the “ball game” on all matters relating to Israel. That is why AIPAC is already all in for Clinton in 2016 and why she is not-so-strangely silent on the Iran agreement).

In 15 years on Capitol Hill, I never once was visited by anyone other than Jews on matters related to Israel. Not once. Nor did I ever hear any Congressional aide say, “my boss has to vote for that awful anti-Palestinian resolution. The pastors in our district are up in arms.”

Simply put, that never happens. On Israel, only Jews matter. Not Christians. Certainly not Muslims.

In fact, it is not Jews, in general, who matter. As we know from the polls, only 5% of Jews vote based on the Israel issue. No, the Jews who matter are multimillionaires and billionaires. They, not the doctors and teachers down the street, constitute the Israel Lobby which is why, in Israel, it’s referred to as the Jewish Lobby.

I understand why AIPAC and its satellites want us to think the lobby consists of Christian fundamentalists too. They don’t want people to notice that they are the only organized constituency trying to defeat President Obama’s Iran agreement and bum rush us into a war with Iran. But they are.

Unfortunately, the average American (if and when he finally notices all this) may think that AIPAC and company represents all of us, not merely a few thousand rich “activists.”  They may not know that Jews overwhelmingly support the effort to achieve an agreement with Iran and that, as Peter Beinart pointed out the other day, if American Jews have a “leader,” his name is Obama not Netanyahu or the faceless men who run AIPAC. Other than the AIPAC crowd, Jews are not Israel Firsters. They are Liberal Firsters.

That is one of the two reasons the lobby is so dangerous. One, the policies it supports jeopardizes the continued existence of Israel while destroying the lives of millions of Palestinians.  And, two, the lobby’s actions (now more publicized than ever before) jeopardize the Jewish future in America, the safest home we have ever had.

Are we really going to repay the debt we owe to this country by allowing a bunch of unrepresentative millionaires to undermine our president and his attempts to keep Americans out of another Middle East war. Didn’t the neocons’ pointless Iraq war (4500 American dead, countless Iraqis) teach us anything?

The lobby is our shame.