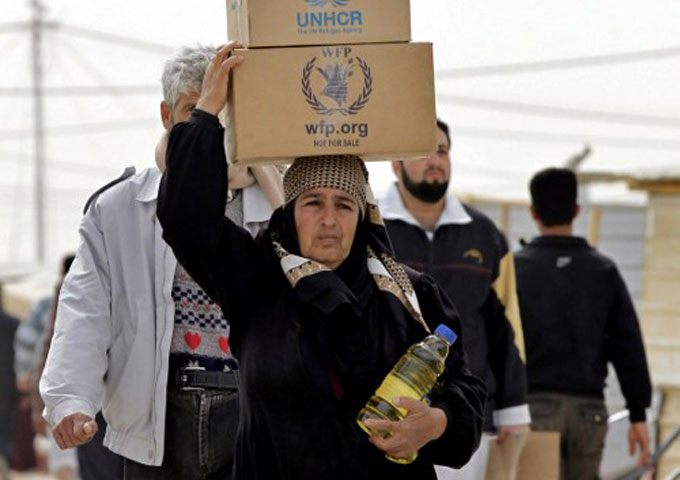 The resolution, initiated by Saudi Arabia on behalf of dozens of states including the US, is one of the strongest criticisms yet of the regime of President Bashar al-Assad. It also expresses “grave concern at the spread of extremism and extremist groups” in Syria.

The resolution, approved 127 to 13, with 47 countries abstaining, is not legally binding.

The Syrian ambassador to the UN, Bashar Jaafari, called the resolution “outrageously hostile”.

Jaafari also criticized Saudi Arabia, which backs the rebels and has strongly criticized the Security Council’s failure to resolve Syria’s civil war, as a supporter of terrorists “throughout the world”.

Earlier this week the UN launched an appealed for a record $6.5 billion for Syria and its neighbours to help 16 million people, many of them hungry or homeless victims of a conflict that has lasted 33 months with no end in sight.

The Syrian appeal accounted for half of an overall funding plan of $12.9 billion for 2014 to help 52 million people in 17 countries, announced by UN emergency relief coordinator Valerie Amos at a meeting of donor countries in Geneva on Monday.

“This is the largest amount we have ever had to request at the start of the year,” Amos told a news conference, referring to the worldwide appeal.

The money requested for Syria, covering food, drinking water, shelter, education, health services and polio vaccines, was the largest UN appeal ever for a single crisis.

More than 100,000 people have been killed in a civil war that has uprooted millions of people, devastated many cities and wreaked havoc on the economy and basic public services.

Syria’s currency has plummeted by 80 per cent since the revolt began in March 2011, and destruction of the water network has left 10 million people – almost half the pre-war population – relying on the UN to chlorinate water.

“There are parts of country where for 22-23 hours a day people aren’t getting electricity. Fuel is scarce,” said Amos, who visited Damascus briefly on Saturday to meet ministers.

“Even if the violence were to stop tomorrow we would have to maintain help on the humanitarian front,” she said.

Amos was cautious about chances of a breakthrough at peace talks between President Bashar al-Assad’s government and his opponents that are scheduled to begin in Switzerland on January 22.

“Obviously the expectations have to be modest in this point of time,” she said.

The UN estimates that 250,000 Syrians are living under siege as winter bites, most of them encircled by government forces, but also including 45,000 in two towns in the north that are besieged by anti-Assad rebels.

The United Nation’s Security Council issued a presidential statement on October 2 calling for protection of civilians, demilitarisation of schools and hospitals, and improved access for aid workers.

The UN started airlifting aid from Iraq on Sunday, as it was too dangerous to go by land, said Antonio Guterres, head of the UN refugee agency.

The UN is seeking $2.3 billion to help 9.3 million people in Syria next year, compared with its 2013 appeal of $1.4 billion, of which only 62 percent has been received.

For five neighbouring countries – Egypt, Iraq, Jordan, Lebanon and Turkey – it is seeking $4.2 billion to assist up to 4.1 million Syrian refugees and host communities who will be given food aid, including cash or vouchers.

Its overall appeal for 2014 also includes aid to Sudan, South Sudan, Yemen, Democratic Republic of Congo, Afghanistan and the Philippines.