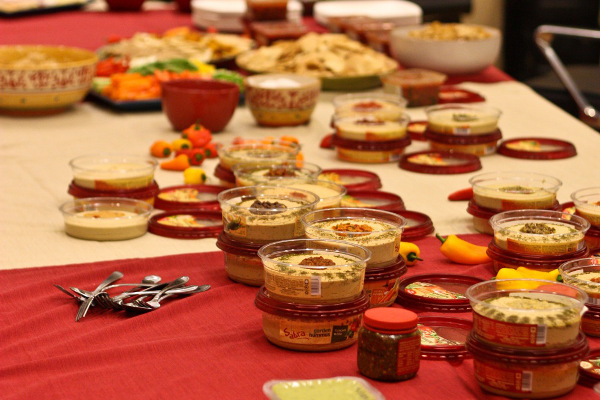 When tax time rolls around each year, every American citizen gives $21.59 in military aid to Israel, according to the U.S. Campaign to End the Occupation [3]. But that’s not the only way American citizens contribute to the Israeli military, which has occupied Palestinian land for 46 years, and the West Bank settlement project that accompanies the occupation.

Consumers may not know it, but buying products like Sabra hummus and Sodastream helps fuel Israel’s military control over Palestinians. Some companies have factories located in one of the 125 officially recognized settlements in occupied Palestine, which are illegal under international law. Other companies contribute to the maintenance of an occupation through cooperation with the Israel Defense Forces (IDF), whose main goal is to protect illegal settlements and exercise dominion over the lives of millions of Palestinians. Buying these products gives profits to companies who exploit Palestinian land and resources.

Here are six consumer products and companies that help keep the Israeli occupation rolling along. All of them have been targeted by the boycott, divestment and sanctions (BDS) movement, a Palestinian-led international campaign to isolate Israel for its violations of international law. BDS groups have called on consumers to boycott these products as a way of sending an economic signal to Israel.

This soda-making company is ubiquitous nowadays. Sodastream products, which turn water into sparkling water and other flavored drinks, have been incredibly successful in the U.S. According to CNN [4], sales of their products have skyrocketed, with the company bringing in $436 million in 2012, a 51% increase from the previous year. The company, which was bought by an Israeli company that eventually sold it to a private equity firm, has touted itself an environmentally friendly company

But the less-progressive side of Sodastream lies in the location of its factory. The main facility where Sodastream products are made is in the industrial settlement area of Mishor Adumim, which is right outside Jerusalem and even closer to the mega-settlement of Ma’ale Adumim. Mishor Adumim serves Ma’ale Adumim by providing the settlement with employment for Israelis and business for nearby Israeli companies.

Sodastream claims it’s not violating international law by operating in a settlement because its factory benefits the local population of Palestinians. It’s true that Sodastream employs Palestinian laborers. But according to Who Profits? [5], an Israeli-based organization that tracks occupation profiteers, “the workers in the SodaStream factory suffer from harsh working conditions.” Palestinian workers are seen as a cheap labor force to be exploited, and have complained that when they protest for better wages, they are fired.

By bolstering Ma’ale Adumin, Sodastream’s factory in Mishor Adumim contributes to the death of any chance for a viable and contiguous Palestinian state. Ma’ale Adumim was strategically built as a settlement that cuts off easy access between Ramallah and Bethlehem, two important cities in the West Bank.

For those who love Sodastream but are looking for an alternative, have no fear. A number of similar products allow consumers to make their own bubbly water without giving money to a company operating on occupied land. The alternatives [6] include Cuisinart’s beverage maker and a company named SodaSparkle.

Sabra is another Israeli company that seems to be in every Americans’ refrigerator and brand-name supermarket. It may taste good to dip chips and vegetables in, but it also boosts the Israeli military while marketing hummus as exclusively Israeli.

The hummus company has embarked on a major push to sell its products to consumers. Sabra has ramped up its advertising in recent years, and it’s been quite successful. Earlier this year, the Huffington Post reported [7]that it has captured 60% of a hummus market whose sales have been increasing in the U.S.

Sabra hummus is partly owned by an Israeli company named the Strauss Group, which has “adopted” an elite IDF unit. (PepsiCo also owns Sabra.) The company’s website has boasted [8] of providing the Golani Brigade “with an ongoing variety of food products for their training or missions, and provide personal care packages for each soldier that completes the path.” The Strauss Group has also said it gives funds to the IDF unit for “welfare, cultural and educational activities, such as pocket money for underprivileged soldiers, sports and recreational equipment, care packages, and books and games for the soldiers’ club.”

The Golani Brigade played key roles in the Israeli army’s assault on the Gaza Strip in 2008-09 during “Operation Cast Lead.” Widespread human rights abuses and possible war crimes were committed by the Israeli army during the assault.

Tribe is the second largest hummus company in the U.S. It is also tied to problematic Israeli practices.

The company is partly owned by Osem, which partners with the Jewish National Fund, a group that has worked intimately with the Israeli government. The JNF played a key role before the establishment of the State of Israel by participating in plans with Israel’s founder, David Ben-Gurion, to ethnically cleanse Palestinians from their land in 1948. The JNF’s record hasn’t gotten much better since then.

After Israel was established, the state leased the JNF land, and eventually the fund came to own 13 percent of all land in Israel, the majority of which was originally owned by Palestinians. Their charter explicitly limits the leasing of their land to Jews only in a state where 20 percent of the population is Palestinian. The JNF has planted forests all around Israel, some of them on top of destroyed Palestinian villages.

One of the more egregious actions the JNF has participated in recently is the repeated bulldozing of the Bedouin village of Al Araqib, one of many “unrecognized” areas in Israel the government refuses to connect to electricity or water systems. The JNF has partnered with Israeli police to destroy Al Araqib an astonishing 50 plus times in order to build a forest in the village.

Plenty of stores carry Ahava, which means “love” in Hebrew. You can find its Dead Sea-extracted beauty products in New York City’s Ricky’s shops, in Nordstrom and in Bed, Bath and Beyond, among others. But what the products won’t tell you is that they’re manufactured in a West Bank settlement, owned by settlements and that they’re illegally exploiting Palestinian natural resources.

The main factory where Ahava products are made is in Mitzpe Shalem, which sits in the eastern part of the West Bank and is on the shore of the Dead Sea. Ahava excavates mud from the shores of the Dead Sea, despite it being a violation of international law to exploit the resources of an occupied territory.

Since 2009, the group CodePink has led a campaign aimed at boycotting Ahava [10] and urging stores to drop its products.

The popular information technology company is most well known in the U.S. for making printers. Hewlett Packard also makes products like digital cameras, personal computers and smartphones. It holds the top spot globally for shipments of PCs.

But that’s not all HP manufactures. Services it provides have been sold to the Israeli military.

According to Who Profits?, [11]HP owns EDS Israel, which since 2009 has been referred to as “HP Enterprise Services.” This branch of Hewlett Packard provides the Israeli Ministry of Defense with what’s called the “Basel System,” a biometric access control system that regulates the permit system for Palestinian workers.

In addition, HP is involved with the West Bank settlement project. The IT company provides services and technologies to two major settlements, and also “takes part in the ‘Smart City’ project in the illegal West Bank settlement of Ariel, providing a storage system for the settlement’s municipality,” the Who Profits? project reports.

According to Who Profits?, [12] Motorola Solutions Israel won a contract in 2005 to provide Israeli settlements with fences, and its radar detection systems have been installed in at least 20 illegal settlements throughout the West Bank. The same system is also used for Israel’s separation barrier, which was ruled illegal by the International Court of Justice in 2004.

The company also created a mobile communication system for the Israeli army so that soldiers could speak with one another when serving in the West Bank. Lastly, Motorola Solutions Israel provided the army with electronic bomb fuses until 2009, when the specific department of the company that made the fuses was sold to Aeronautics Defense Systems.

See more stories tagged with:
Israel [13],
palestine [14],
consumerism [15],
sodastream [16]
The views expressed in this article are the author’s and do not necessarily reflect those of MuslimVillage.com.