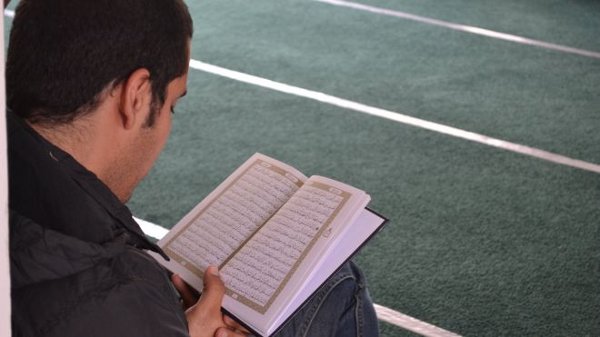 Most Latinos know the country is celebrating Hispanic Heritage Month right now. What far fewer Latinos know is that next week marks Eid al-Adha, one of Islam’s most sacred holidays.

And yet the two observances are more related now than most Latinos realize.

Just as the U.S. Latino population is on the rise – Hispanics are now the nation’s largest minority – so is the number of Latino Muslims. And it’s not just a result of Arab Latin Americans emigrating to the United States.

According to organizations like WhyIslam.org, Latinos are one of the fastest growing segments of the Muslim community. About six percent of U.S. Muslims are now Latino – and as many as a fifth of new converts to Islam nationwide are Latino.

The American Muslim Association of North America, based in North Miami, says heavily Hispanic South Florida in particular is home to a rising number of Latino Muslims.

Not that conversion to Islam is easy in Latino society, as Marina Gonzalez knows. A Nicaraguan-American nurse in Miami, Gonzalez converted five years ago and wears the hijab, the Muslim women’s head garb. At first her family stopped talking to her.

“They [were] calling me Talibana,” Gonzalez recalls. “My mother, she didn’t like to go [out] with me because I wear the hijab.”

But now her mother “understands. When I go to my parents’ house they turn off the TV when I have to pray. I’m so happy.”

Najib Sowma’s first name was Dario before he converted six years ago. Today he’s a leading member of the Al-Ihsaan mosque in South Miami-Dade. But his Cuban mother was initially shocked.

“Now her views have changed,” says Sowma. “Prior to me being Muslim to who I am now, she sees a big difference in my character.”

If it’s a surprise that many Latinos are moving from a predominantly Roman Catholic culture to an originally Arab faith, perhaps it shouldn’t be. For one thing, like African-Americans in the 1960s, Latinos are discovering their own historical and cultural ties to Islam and the Arab world. And that starts with what most defines Latinos: Spanish.

“Our language is nurtured by more than 4,000 words that come from Arabic,” says Wilfredo Ruiz, a Puerto Rican-born Muslim who converted a decade ago and is a lawyer for the South Florida chapter of the Council of American-Islamic Relations. “Every word in Spanish that starts with ‘al,’ for example, like alcalde, alcantarilla, almohada.”

That’s because Arab Muslims ruled Spain for some 800 years during the Middle Ages – and made the Iberian Peninsula one of the most advanced civilizations of its time. A millennium later, Ruiz says that past is an inescapable part of the Hispanic DNA.

“What most Latinos who have embraced Islam find most amazing is their cultural affinity to the Muslim culture,” says Ruiz. “It’s like rediscovering your past. That area of our past has been hidden from us.”

Ruiz points out that both Latinos and Arabs highly value the extended family and traditions like offering hospitality to strangers. In religious terms, Latinos like Gonzalez say Islam provides a simpler, more direct form of worship than Catholicism does. They also feel more structure than they see in the evangelical churches so many Latinos join today.

“The connection I have with God now is better than before,” says Gonzalez.

Yet many take comfort in the overlap between Catholicism and Islam. Muslims, for example, venerate the Virgin Mary as well as Jesus, at least as a prophet.

“At the beginning when I was reading the Koran I said, “Oh, [Muslims] believe in the hereafter, in angels,’” says Liliana Parodi, a Peruvian-American surgical technician in Miami who converted 24 years ago. “You know, it’s not so much difference.”

More Latina women convert to Islam than Latino men do. Islam is admittedly questioned for its segregation of women. But Latinas like Parodi say it’s hypocritical for a male-dominated Catholic Church – which forbids women priests, birth control and divorce – and an ultra-macho Latino society – whose Spanish-language television networks still portray women as spitfire sexpots – to criticize their new faith in that regard.

“I tell them, ‘Look at yourself,’” says Parodi. “The sad part is [when they] see women as objects.”

A decade ago, the nation’s image of a Latino Muslim was unfortunately Jose Padilla, the so-called “Dirty Bomber” who was convicted for aiding terrorists. But for Ruiz, who was also a Navy chaplain, much has changed since then – and Latinos are less fearful now of converting.

“They soon come to learn that [Muslims] abhor violence,” Ruiz says. “We have the same aspirations for social justice as a Christian or a Jew does.”

Which means, as Eid al-Adha arrives next Monday evening, more Latinos will be saying “Eid Mubarak.” Which is Arabic for “Eid Bendito.” Which is Spanish for “Have a Blessed Eid.”