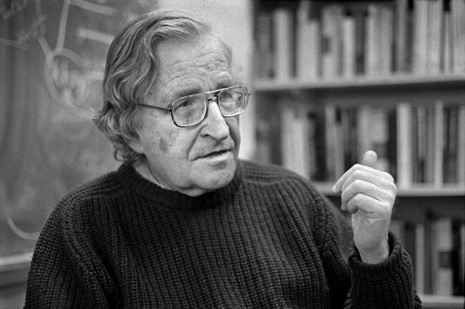 Noam Chomsky, the world-renowned political dissident, linguist and author, weighs in on today’s 12th anniversary of the September 11, 2001, attacks and how the civil war in Syria appears destined to permanently break the country apart. “[9/11] was very significant, a major terrorist act, thousands of people killed,” Chomsky says. “It’s the first time since the War of 1812 that U.S. territory had been attacked. The United States has had remarkable security, and therefore was, aside from the horrible atrocity, a very significant, historical event. And it changed attitudes and policies in the United States quite considerably.

And in reaction to this, the government was able to ram through laws that sharply constrained civil liberties. It was able to provide pretexts for the invasion of Afghanistan, invasion of Iraq — the destruction of Iraq, with consequences that spread through the region. And it’s the basis for Obama’s massive terrorist war, the drone war, the most extreme terrorist campaign that’s underway now, maybe most extreme in history, and the justification for it is the same: the second 9/11, 9/11/2001. So, yes, it’s had enormous effects on society, on attitudes, on policies. Many victims throughout the world can testify to that.” On Syria, Chomsky says the country “is plunging into suicide. If negotiations [don’t] work, Syria is moving towards a kind of very bloody partition.”

This is a rush transcript. Copy may not be in its final form.

AMY GOODMAN: Our guest for the hour is Professor Noam Chomsky. In 2007, Noam,  Democracy Now! interviewed General Wesley Clark, the retired four-star general who was the supreme allied commander of NATO during the Kosovo War. General Clark described how an unnamed Pentagon official, just after the September 11th attacks, talked about a memo that said the U.S. planned to take out seven countries in five years, including Syria. _

GEN. WESLEY CLARK: About 10 days after 9/11, I went through the Pentagon, and I saw Secretary Rumsfeld and Deputy Secretary Wolfowitz. I went downstairs just to say hello to some of the people on the joint staff who used to work for me, and one of the generals called me in. He said, “Sir, you’ve got to come in and talk to me a second.” I said, “Well, you’re too busy.” He said, “No, no.” He says, “We’ve made the decision we’re going to war with Iraq.” This was on or about the 20th of September. I said, “We’re going to war with Iraq? Why?” He said, “I don’t know.” He said, “I guess they don’t know what else to do.” So I said, “Well, did they find some information connecting Saddam to al-Qaeda?” He said, “No, no.” He says, “There’s nothing new that way. They just made the decision to go to war with Iraq.” He said, “I guess it’s like we don’t know what to do about terrorists, but we’ve got a good military and we can take down governments.” And he said, “I guess if the only tool you have is a hammer, every problem has to look like a nail.”

So I came back to see him a few weeks later, and by that time we were bombing in Afghanistan. I said, “Are we still going to war with Iraq?” And he said, “Oh, it’s worse than that.” He said—he reached over on his desk. He picked up a piece of paper, and he said, “I just got this down from upstairs,” meaning the secretary of defense’s office, “today.” And he said, “This is a memo that describes how we’re going to take out seven countries in five years, starting with Iraq, and then Syria, Lebanon, Libya, Somalia, Sudan and, finishing off, Iran.” I said, “Is it classified?” He said, “Yes, sir.” I said, “Well, don’t show it to me.” And I saw him a year or so ago, and I said, “You remember that?” He said, “Sir, I didn’t show you that memo! I didn’t show it to you!”

AMY GOODMAN: That was General Wesley Clark. I was interviewing him at the 92nd Street Y here in New York in 2007. Professor Noam Chomsky, if you could respond?_

NOAM CHOMSKY: Well, I think that’s—it’s quite plausible. The Bush administration veered slightly, not far, but slightly, from the general pattern. Actually, the goal of U.S. policy for decades has been to control and dominate those countries. But the Bush administration was more extreme. They thought they could actually just, as they put it, “take ’em out” and forcefully impose our own regimes—not that that would be anything new. There’s a long list of similar cases, going back to Iran in 1953, Guatemala in 1954. There was an assault against—major assault against Indonesia in 1958, an effort to strip away the outer islands where the resources are, and—because they were concerned about too much independence in Indonesia. That failed. Invasion of Cuba failed. The murder of Lumumba, in which the U.S. was involved, in the Congo destroyed Africa’s major hope for development. Congo is now total horror story, for years. The U.S. supported the Mobutu dictatorship. Now it’s maybe the worst place in the world. And on right through, case after case. This is standard U.S. policy. The Bush administration went beyond. They were more extreme in their goals and their actions. And they had to pull back, because that was just beyond U.S. capacity.

Iraq—the Iraq War was a very serious defeat for the United States, unlike the Vietnam War. In the case of Indochina, it’s called defeat, but that only means that the U.S. did not achieve its maximal objectives. It did achieve its major objectives, as McGeorge Bundy well understood. It had prevented a Vietnam from moving on a path of independent development, which might have had this contagious effect that Kissinger was concerned with. As it was put at the time, one rotten apple may spoil the barrel, meaning just what Arthur Schlesinger and others said. If you allow independent taking matters into your own hand in one place and it works, others will try to emulate it, system will erode—a standard principle for systems of power. The godfather of the Mafia understands it perfectly well. In the Mafia system, if some small storekeeper decides not to pay protection money, the money may not mean anything to the godfather, but he’s not going to let him get away with it. And, in fact, he’s not just going to go in and send his goons to get the money; he’s also going to beat him to a pulp, because others have to understand that disobedience is not tolerated. In international affairs, that’s called “credibility.” The bombing of Kosovo, Wesley Clark’s bombing of Kosovo, was the same. After other—there were pretexts, but they collapsed, and the final one, as Tony Blair and George Bush said, was we have to maintain the credibility of NATO. NATO had issued edicts, and we must ensure that they’re obeyed. And NATO, of course, does not mean Norway; it means the United States. The god—

NOAM CHOMSKY: I will respond to that, though I—my own view is that we should be concentrating on the first 9/11, the one in Chile, which was a much worse attack, by any dimension. But the one here was very significant. It was a major terrorist act, thousands of people killed. It’s the first time since the War of 1812 that U.S. territory had been attacked. The United States has had remarkable security, and this, therefore, was—aside from the horrible atrocity—a very significant, historical event. And it changed attitudes and policies in the United States quite considerably. In reaction to this, the government was able to ram through laws, PATRIOT Act, others, that sharply constrained civil liberties. It was able to provide pretext for invasion of Afghanistan, invasion of Iraq, destruction of Iraq. The consequences have spread through the region. And it provides—it’s the basis for Obama’s massive terrorist war, the drone wars, the most extreme terrorist campaign that’s underway now, maybe most extreme in history. And the justification for it is the same: the second 9/11, 9/11/2001. So, yes, it’s had enormous effects on the society, on its—on attitudes, on policies. Many victims throughout the world can testify to that. _

NOAM CHOMSKY: Well, Syria right now is plunging into suicide. If the negotiations options that Lakhdar Brahimi and Russia and others have been pressing, if that doesn’t work, Syria is moving towards a kind of very bloody partition. It’s likely that the Kurdish areas, which already are semi-independent, will move towards further independence, probably link up with Iraqi Kurdistan, adjacent to them, maybe make some arrangements with Turkey—those are already in process—and the rest of Syria, what remains, will be divided between a bloody, murderous Assad regime and a collection of rebel groups of varying kinds, ranging from secular democratic to murderous, brutal terrorists. That looks like the outcome for Syria.

That brings us to Israel-Palestine. Just a couple of days ago, Secretary Kerry, Secretary of State Kerry, appealed to the European Union to continue to support illegal, criminal Israeli settlement projects in the West Bank—wasn’t put in those words, but the way it was put is that Europe had taken the quite appropriate step of trying to draw back from support for Israeli operations in the illegal settlements—incidentally, that the settlements are illegal is not even in question. That’s been determined by the highest authorities—the Security Council of the United Nations, the International Court of Justice. In fact, up until the Reagan administration, the U.S. also called them illegal. Reagan changed that to “an obstacle to peace,” and Obama has weakened it still further to “not helpful to peace.” But the U.S. is virtually alone in this. The rest of the world accepts the judgment of the Security Council, the International Court of Justice, that the settlements are illegal, not just the expansion of the settlements but the settlements themselves. And Europe had pulled back from support for the settlements, and Kerry called on Europe not to do that, because the pretext was that this would interfere with the so-called peace negotiations that he’s set up, which are a total farce. I mean, the peace negotiations are carried out under preconditions, U.S.-imposed preconditions, which virtually guarantee failure. There are two basic preconditions. One—_

NOAM CHOMSKY: Oh, OK. One precondition is that the U.S. run them. The U.S. is a participant, not neutral. The other is that Israeli expansion of settlements must continue. No peace negotiations can continue under those conditions. _

AMY GOODMAN: Well, Noam, we want to thank you very much for being with us, spending the hour with us, Noam Chomsky, world-renowned political dissident, linguist and author, Institute Professor Emeritus at Massachusetts Institute of Technology, where he’s taught for more than half a century, and has written more than a hundred books. And we will link to our past interviews with him at our website, democracynow.org. You can also go to our website to see a number of new interviews about the U.S.-backed coup in Chile that took place 40 years ago today, September 11, 1973. I just spoke with the judges who later arrested and indicted General Augusto Pinochet and with the forensic specialist who exhumed the bodies of ousted President Salvador Allende and singer Víctor Jara. Also on our website, you can see our interactive timeline of the voices of dissent surrounding the September 11, 2001, attack here at home. We showcase our archive of in-depth reports documenting the attacks and their aftermath. Also, we have a job opening hiring a Linux systems administrator. Go to our website at democracynow.org.

Amy Goodman is the host of the nationally syndicated news program, Democracy Now!.