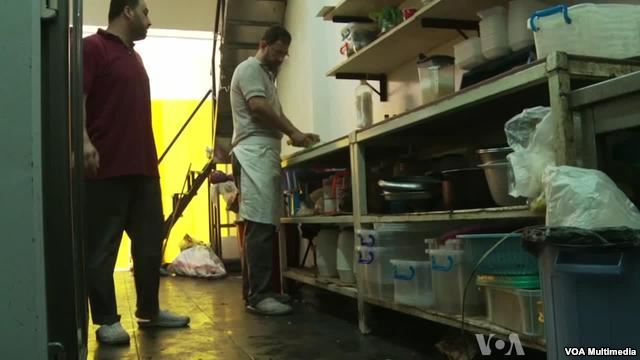 CAIRO — More than a million Syrians have fled the conflict in their homeland, seeking refuge in countries nearby. Those who have landed in Egypt have contributed to the creation of a “Little Syria” just west of Cairo.

Wael Mustafa left Syria last year with his family, his cooking skills and little else.
Now working in a busy shwarma restaurant near Cairo, Mustafa explained how he got here. After abandoning his devastated home on the outskirts of Damascus, Mustafa, his wife, children and aging parents spent months seeking safety in one town after another. But war always followed. So they fled to Beirut, then on to Cairo.

“Here I start from the zero,” Mustafa said. He is one of the lucky ones.

“Because here everything is easy,” he added. “The people are easy. To find job easy. To move here easy.”

The restaurant Mustafa works in is in “Little Syria,” a neighborhood in a desert city west of Cairo. He is one of 140,000 Syrian refugees in Egypt, nearly half of whom are registering with the United Nations refugee program.

Most are opposed to Syrian President Bashar al-Assad. Shops include “The Bakery of the Revolution.”

But Mustafa deflected questions about the politics of the conflict, now in its third year.

“Nobody knows who will win. Until now, nobody wins,” he said. “All the people – Syrians – now lose.”

Many refugees manage only to make it across the border, landing in camps in Jordan or other neighboring countries, proving a strain to their hosts.

Said Sadek of the American University in Cairo said that is not the case with refugees in Egypt.

“They are not fighters. They are just middle-class-income people who had to escape from the atrocities and the violence. And it is a second home,” said Sadek.

Egypt and Syria were once bound in the United Arab Republic, and family, cultural and Sunni religious ties run deep. The government treats them far differently than exiles from Iraq, Sudan or Palestinian lands.

“Thanks [be to] God we have the Egyptian government who had decided to grant them access to public schools since last September, in addition to the access of all Syrians in Egypt to public health facilities,” said Mohamed Dayri, the regional representative for the United Nations High Commissioner for Refugees.

But some worry how long the goodwill can last. Egypt has troubles of its own. And with the devastation of Syria so thorough, refugees, Mustafa among them, are uncertain when they can return.

That’s a prospect daunting to all concerned.