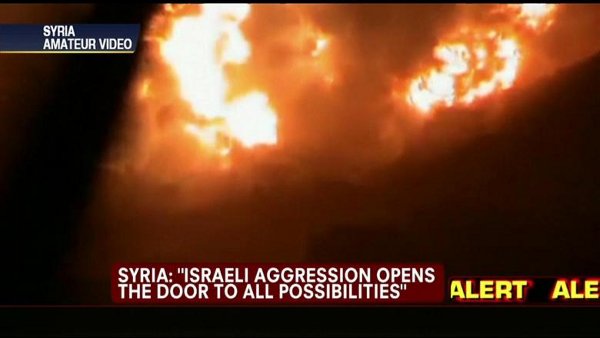 Syria has accused Israel of supporting rebel factions following airstrikes at the weekend. Washington claimed it had no warning of the strike, while Israel stepped up the military presence on its borders without confirming their hand in the attack.

Syrian state news outlet SANA reported that the Foreign Ministry sent identical letters to the president and secretary general of the UN Security Council deploring the attacks and urging action against Israel.

“While stressing its right to defend itself , its land and sovereignty, the Syrian Arab Republic demands that the international Security Council shoulder its responsibilities to stop the Israeli aggression on Syria and prevent its recurrence and prevent the deterioration of the situation in the region so as not to go out of control,” wrote SANA, quoting the letters. The Syrian government likened the strike to a declaration of war by Israel.

The letter stated that the three strikes were carried out at 1.40am on Sunday by Israeli warplanes and hit three depots of the Syrian Armed Forces near Damascus.

“This leaves no room for doubt Israel is the beneficiary, the mover and sometimes the executor of the terrorist acts which Syria is witnessing and which target it as a state and people directly or through its tools inside,” the ministry stressed in its letters. The Assad government usually brands opposition factions as terrorist groups.

Meanwhile, Israel has not admitted to being behind the attacks, but a spokesperson in Washington issued a statement following the attack that “Israel is determined to prevent the transfer of chemical weapons or other game-changing weaponry by the Syrian regime to terrorists, especially to Hezbollah in Lebanon.”

Following the strikes Israel reportedly beefed up security along its borders, deploying tanks and reinforcing troops.

The US, for its part, refrained from pointing the figure at its ally in the Middle East and emphasized that Israeli has the “right to guard against the transfer of advanced weaponry to terrorist organizations like Hezbollah.”

“We coordinate closely with the Israelis, recognizing they are very close to Syria, they are very close to Lebanon,” said President Obama to Telemundo on Sunday. US officials said they had not received any warning that such a strike was going to occur. However, the official did concede that it would not be unusual for Israel to execute such a strike.

“It would not be unusual for them to take aggressive steps when there was some chance that some sophisticated weapons system would fall into the hands of people like Hezbollah,” a US intelligence official told Reuters, speaking on condition of anonymity.

Israeli Prime Minister Benjamin Netanyahu, who has yet to comment on the strike, is currently in China on a state visit where the government has also spoken out against the act of aggression against Syria.

“We oppose the use of military force and believe any country’s sovereignty should be respected,” Chinese Foreign Ministry spokeswoman Hua Chunying told a regular briefing, coinciding with the beginning of Netanyahu’s five-day visit to the country. He called on the “relevant parties” to respect regional peace and stability.

A similar attack was carried out on Syrian territory back in January, striking targets that were reported to be convoys transporting weapons to Hezbollah in neighboring Lebanon.