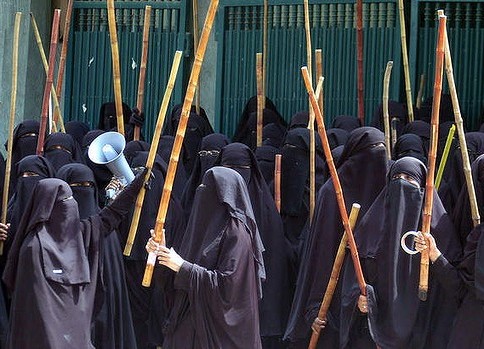 The mistreatment of the female students taking graduation examination, especially those who wear full-face veils, has sparked unrest among them, as they were forced to remove the veils by the examination supervisory staff and the Punjab University inspectors for an identity check.

The awkward situation appeared when the inspection team of Punjab University, that is always comprises of men, visited examination centre at Islamabad Model Postgraduate College for Girls F-7/2 Monday during English paper. The female candidates appearing in the Punjab University B.A/B.Sc annual examination 2013 felt harassed when the male staff member forced the students to remove their veil before entering the examination hall to prove their identity.

“During the English paper I was not allowed to cover my face by the supervisory staff that included a man too who forced me to remove the veil. And then the Punjab University inspection team checked our identity. If we are not allowed to wear the full-face veil then the male staff should not be allowed in the examination halls,” complained a student on condition of anonymity.

Despite the presence of the female invigilators, the male inspectors themselves started checking the candidates and even after the identification female students were not allowed to wear the veil during the paper. Those who wear headscarf and don’t cover their faces were also asked to wear scarf in a way that their hair, ears as well as their necks be shown clearly.

The girls taking the paper said they faced harassment at the hands of the males who violated the Islamic values. ‘If they had checked the candidates before entering the hall, there was no need to bar them to wear the scarves and veil during the exam. Besides, they remained inside the examination centre for a couple of hours despite the fact that woman teachers were deputed at the center. The girls were troubled as the inspectors were moving in the rows all the time during the paper’.

Several students and teaching staff of other colleges have also complained the misbehaviour of the inspection team members. ‘The inspectors went to other colleges as well where the exams were going on and they asked the female students to remove the veil for identified before they enter the hall’, informed an official.

The mistreatment of the students including boys and girls by the inspectors is very common, said a teacher. ‘The female students are asked to remove their headscarves and barred not to wear full-face veils during the exams. Some prefer to stay silent and some argue but this practice should be ended. And the inspectors should be given some training to check the candidates without creating disturbance in the examination halls’.

Federal Government College Teachers Association (FGCTA) has strongly condemned the unveiling of faces of innocent girls by the male inspectors and misconduct with the female candidates appearing in the B.A/B.Sc examination. The President of FGCTA Tahir Mehmood confirmed that the association receives a number of complaints every year regarding the inspection teams of Punjab University. ‘

The inspectors often misbehave with supervisory staff and particularly with the candidates. A candidate is already confused and needs a quiet and peaceful environment to solve the paper but the presence of inspectors in the exam centers is just like a bull in a china shop’.

He said as the inspectors are appointed on the basis of favoritism so they are inexperienced and disturb the peaceful environment of examination centers. Punjab University must provide a conducive, quite free from fears of harassment environment in the examination centers and inducted female staff in inspection teams, he added.

Calling for girls to be allowed to wear the veil during exams, the Punjab University Registrar has been sent a written complaint by the guardian of the student too but the officials have not taken any notice of the issue yet.

However, the Controller Examination of Punjab University Dr. Liaqat Ali insisted that the inspectors could not ask the girls to remove their veil or headscarf during exam and whenever they have to check the identity of the candidate they ask the female invigilators for identification. And if he receives any complaint, they will probe the matter.

Regarding the non-induction of the females in the inspection teams, he cited that ‘the university facing shortage of female staff and as the females cannot visit 5 to 7 centers and report back to Lahore office on the same since they are not allowed to stay in Islamabad like their male colleagues due to security reasons so only male inspectors are sent for inspection of the centres’.

He was of the view that the university has maintained it’s standard by keep check on cheating culture so the students complaints against the examination staff is common. He maintained that the inspection teams comprise of professors and they cannot misbehave but admitted that the administrative staff is also sent for inspections during English papers because of shortage of staff.