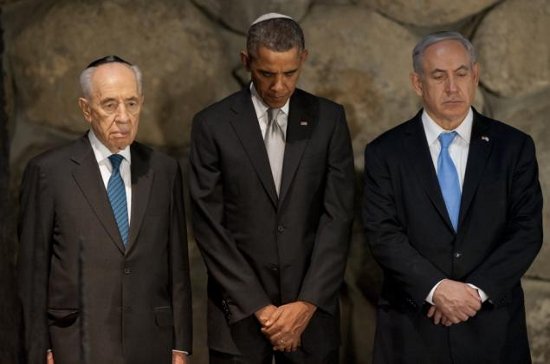 Did anyone expect any positive peace-hopeful results from President Obama’s trip to Israel and his obligatory stops at the West Bank and Jordan? Perhaps some were, but only if demented, credulous simpletons, or trusting souls believing that there are people in Washington, elected or selected, with statesmanship and vision willing to risk their careers by promoting neutrality, rather than affection and solidarity for our congenital sister, Israel. Just how often must we be told that American foreign policy for the Middle East is for all intents and purposes drafted, approved or vetoed in Tel Aviv?

Obama may not be happy with this fact of American political life, but knows he must yield to an irrefutable truth that we no longer try to hide. One need but to look at the fate of the only American president who has advocated impartiality and a high degree of fairness in bringing permanent peace between Israelis and Palestinians: Jimmy Carter. We have consistently managed to ridicule and mock this honorable man. Barack Obama is not about to risk his place in history, as written by our historians, for he has proven time and again that he is no man of vision, just an articulate or even charismatic figure of our elected, self-serving political mediocrity.

Perhaps this meeting between Netanyahu and Obama as spring sprung, and the specter of an Israeli attack on Iran’s nuclear facilities grew near, yielded some time compromise from Israel of which we are not aware (or at what cost to the US). And Syria’s conflict, an open wound in the region requiring massive humanitarian aid, is no comfort to any country in the region. However, if Obama’s only notch for his expected influence is just an apology by Netanyahu to Turkish Prime Minister Recep Tayyip Erdogan for the Mavi Marmarra incident of 2010, then we can safely say that his peacemaking trip was a failure in every regard for Palestinians and their Arab neighbors, and the future of peace in the Middle East.

If President Obama thinks his speech to Israeli university students, asking them to lobby with their elders for peace and compromise, or his oft-voiced disapproval of the indignities and pain being slapped on the Palestinians, is enough to maintain peace, he is living in fantasyland. Those things are meaningless, drowning in the obsequious symbolism that American politicians, including Obama, must constantly render Israel if they wish to remain in power.

Palestinians and their Arab brethren should understand once and for all that there isn’t enough money in the Saudi Kingdom or the Emirates to pay for an extended campaign in public relations that would make the slightest dent in countering Israel’s influence in this United States. Past PR efforts have been futile, and you can rest assured that future efforts would fare no better. To think of the US as a referee in the Israeli-Palestinian dispute is chimeric, totally far-fetched… when the referee takes to the field wearing the Israeli colors, doing so without apologies.

More likely than not, a solution to a two-state Palestine will be found in the next decade, certainly within the next generation as the world enters a new phase of greater cooperation, emergence of new financial powers, and healthy multi-lateral dealings that will take away any one nation’s hegemony over the rest. Only then, and not under the auspices of US good offices and protection, will  a peace be found that provides security for Palestinians as well as Israelis.

We may have seen major global change come about in the last two decades, but change will be vertiginous in the next two. And the US government would be wise to prepare Americans for this upheaval in the world sure to bring new realities, including the emergence of new world powers such as India, Brazil and even a Pan-Arab federation. Of course, a new number one economy, China, will soon replace the United States. The psychological impact will probably be greater than the financial unless we prepare for it, and we deemphasize the Amerithology under which we have lived. The reality will be undeniably clear, for globalization and the maturing of other economies can be summarized in just one single statistic: the United States of America in mid-20th Century had approximately 50 percent of the world’s middle class; and 75 years later, our middle class is projected to be by most estimates under 10 percent of the world’s middle class.

World economics and multi-lateral relationships between nations will force major changes in the United Nations, likely making that world body more significant in bringing peace and fairness to displaced peoples and smaller nations. And that may be the only solution for permanent peace in the Holy Land, and not the good offices of the United States.