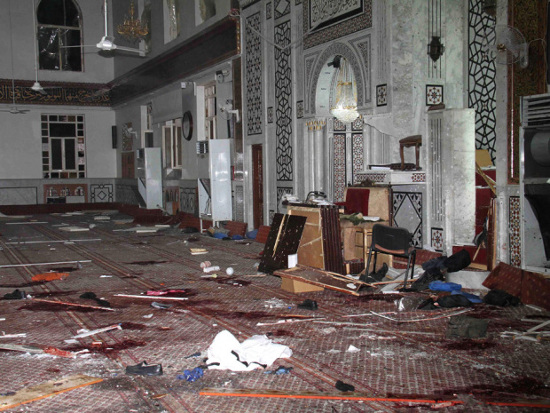 By: Hania Mourtada and Rick Gladstone

A large explosion killed at least 42 people inside a central Damascus mosque on Thursday including the top Sunni religious cleric in Syria Sheikh Mohammad Said Ramadan al-Bouti, one of the major remaining Sunni supporters of President Bashar al-Assad’s embattled government.

Syria state media called the explosion a suicide bombing carried out by “mercenary terrorists against the Syrians,” and it appeared to be one of the worst attacks on worshipers since the Syrian civil war began two years ago. The main armed insurgent group, the Free Syrian Army, denied responsibility, saying it would have never targeted a mosque.

The official news agency, SANA, said at least 84 people were wounded in the blast at the Eman mosque and published photographs on its Web site depicting the aftermath, with large pools of congealed blood, shattered glass and splintered furniture littering the mosque’s interior.

The cleric who was killed, Mohammad Said Ramadan al-Bouti, 84, was one of the most senior figures in Sunni Islam and was easily the most important religious figure to die so far in the war, in which more than 70,000 people have been killed.. His early support for the government in the Syrian civil war was considered crucial to Mr. Assad’s legitimacy because the insurgency has drawn largely from Syria’s majority Sunni population. Mr. Assad is a member of the minority Alawite sect, an offshoot of Shiite Islam, and his closest advisers and loyalists are Alawites.

“He was the most important Sunni clerical supporter of the Assad regime,” said Joshua M. Landis, the director of the Center for Middle East Studies at the University of Oklahoma and author of the Syria Comment blog, which has tracked the Syrian conflict’s progression from a peaceful political uprising to a sectarian-tinged civil war. “It is a great blow to the regime and the remaining Sunni supporters of the president.”

Mr. Landis said the imam had been reviled by some Syrian revolutionaries when he came out early in the conflict to denounce the uprising. He was known for having a prodigious memory, was the author of at least 40 books and was ranked 23rd on a list of the most influential 500 Muslims in the world.

There was no immediate claim of responsibility for the explosion. But the SANA report blamed armed insurgents. “This massacre adds to the crimes perpetrated by the mercenary terrorists against Syrians,” the agency quoted Mr. Assad’s Baath Socialist Party leadership as saying in a statement. “They target everything including the mosques and houses of worship.”

The agency quoted the Ministry of Religious Endowments as saying the imam had been “martyred while giving a religious lesson” in the mosque. “The malicious hands of traitors killed the great Scholar because he was the voice of Syria, the right of Syria and the image of Syria,” it quoted the ministry as saying.

Some Syrian fighters and anti-Assad activists reached by telephone said they would not be surprised if the government were responsible for the mosque explosion. “I expect the regime to be involved in this assassination,” said Abu Tamam, a member of an insurgent group called the Jundilla Battalion.”He is just a religious figure and not a state figure. He used to have influence, but today he’s an extra burden on the regime.”

But others expressed strong doubts that Mr. Assad’s operatives would have killed the imam or bomb a mosque in the heart of Damascus. “The regime will never get rid of such an important figure,” said an antigovernment activist in Turkey. “He’s like the spiritual father to Bashar.”

A Statement from Shaykh Muhammad al-Yaqoubi on the martyrdom of Sheikh Al-Bouti: “We have sadly received the news that the great Allamah Dr. Sa`eed Ramadan al-Bouti was martyred today in a car bomb in Damascus. It is a big calamity for Muslims in losing such a great figure who was a Mujaddid for the deen and who defended Islam and the doctrine of Ahl us-Sunnah for several decades.We received news that he was planning to move out of Syria and that he began to understand the atrocities of the Assad regime there. On hearing this, the regime decided to get rid of him, hence he was surrounded by heavy security who limited his movement. However, we denounce his killing whether the regime did it or the takfiri groups. People should not be killed in a political struggle especially because of their opinions.We offer our condolences to his family, his students, and to the people of Damascus and we pray for him and for all who were killed with him – 21 matryrs – that Allah Almighty grant him and them the highest ranks in al-Firdous.”