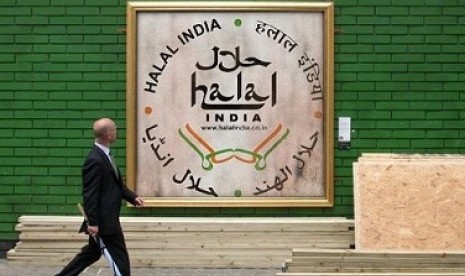 SHARJAH // Trading halal food under unified global standards is at the top of the agenda for Islamic countries, experts said this week.

With common mistakes made by some certification bodies, experts said a universal system must be set to ensure consumers’ food is 100 per cent halal.

“Halal is a very sensitive issue that Muslims should deal with,” said Haluk Dag, secretary general of the Standards and Metrology Institute for Islamic Countries (SMIIC) in Turkey. “We must have a technical committee to deal with halal food issues, especially with new technologies in place such as mechanical slaughtering and genetically-modified organisms.”

He was speaking during a lecture on halal standards at the Halal Congress Middle East, which took place alongside the Halal Food Middle East exhibition in Sharjah this week.

The global halal industry is estimated at more than Dh10 trillion and it is growing by more than 20 per cent every year. It caters to around 1.6 billion consumers worldwide, according to Asad Sajjad, chief executive of the Halal Development Council.

But with the increase in the demand for halal products comes an increase in common mistakes made by different certification bodies.

“Most halal certification bodies do not have scientific and Sharia committees,” said Dr Hani Mansour Al Mazeedi, a research scientist at the Kuwait Institute for Scientific Research. “The two committees are needed to work hand in hand to understand new technologies, to solve emerging religious issues linked with new technologies, to understand the chemical nature of raw materials and to provide procedures to switch haram production lines to halal ones.”

He said in the west, many halal meat certifying bodies were “ignorant” about halal processed food requirements, such as processed cheese in hamburgers. “They are not sincere in selecting their halal slaughter operator,” he said. “I have personally witnessed a halal slaughterman in France who does not utter the Tasmiyah” a prayer required when slaughtering an animal.

“Some bodies are not trustworthy and certify haram meat,” he added. “There must be an international trustworthy organisation that will harmonise halal services globally such as the Muslim World League of Saudi Arabia.”

Countries are starting to take the necessary steps in order to achieve that.

“For centuries, we needed a common language which defined quality and safety in our daily lives, especially when it comes to trade,” said Dr Mohammed Hussain Shojaee, the director of Faroogh Life Sciences Research in Iran. “And until we resolve this part, we won’t be able to move forward.”

After being chosen by the Organisation of Islamic Cooperation (OIC) to regulate unified halal codes for cosmetics and perfumes in June, the Emirates Authority for Standardisation and Metrology (Esma) was also selected to chair the halal food technical committee. “A single halal standard will ultimately harmonise exports and imports and ease market access to several regions,” said Saif Mohammed Al Midfa, the Expo Centre’s director-general in Sharjah.

Experts said Gulf countries have also discussed making it mandatory for all imported meat to carry a halal stamp.

“Different halal authorities follow different Islamic rulings,” said Mr Dag. “There must be a common platform where all the parties come together and argue on the specific issues to define the minimum requirements of halal standards.”

He said those regulations must be applied regionally, then globally.

“The journey from science to standard is sometimes very complicated,” Dr Shojaee said. “But Muslims are entitled to halal food that is wholesome and safe.”