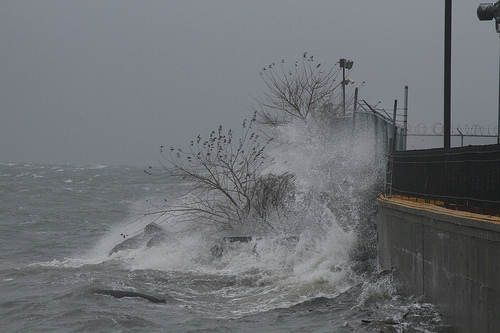 U.S. President Barack Obama has declared a “major disaster” in the state of New York, just hours after the massive storm named Sandy raked over Manhattan, flooding low-lying streets and wiping out power across much of New York City.

The storm, which hit late Monday south of New York with hurricane-strength winds, has now weakened and moved inland. Sandy still has winds of about 100 kilometers per hour. The National Weather Service says the storm is expected to move into Canada by Wednesday.

The storm brought torrential rain, high winds and dangerous tidal surges from the Atlantic to one of the nation’s most densely populated regions. At least 14 people in east coast states died in the storm, mostly from traffic accidents and downed trees.

Manhattan was hit was hit by a storm surge of four meters, bringing the usually bustling section of New York to a halt. More than 1 million people in the area of the nation’s most populous city lost power. More than 6 million homes and businesses along the U.S. east coast and farther inland lost power.

A New Jersey nuclear power plant declared an alert after waters rose to a designated high-level mark. Officials said there were no safety concerns at the plant, which was shut off for maintenance.

The deaths were reported across the affected region, from the U.S. state of Maryland to the Canadian city of Toronto. Most of the fatalities resulted from falling trees or traffic accidents.

Tunnels and streets in low-lying areas of New York City were flooded, including the construction site where the World Trade Center once stood. Some residents were ordered to evacuate. The facade of an apartment building in the Chelsea neighborhood crumbled and fell, leaving entire apartments and their furnishings exposed to the elements. Cars in low-lying areas have been seen floating down the streets.

Other U.S. cities along the Eastern seaboard, including Washington, were also at a standstill, with public transit systems suspended, airports closed and millions of people forced to stay home from work for a second day Tuesday. Unseasonably powerful blizzards struck farther inland. As much as a meter of snow was predicted in some places, as the storm spanned some 1,500 kilometers.

Authorities in nine U.S. states and Washington, D.C. have declared states of emergency. U.S. federal government offices were closed Monday and will remain so on Tuesday. The Department of Defense says nearly 2,000 members of the National Guard have been activated to help with disaster response and some 60,000 more are on standby.

U.S. Coast Guard helicopters rescued 14 crew members who abandoned the HMS Bounty after it started to take on water off the coast of the state of North Carolina. Another crew member, who was termed “unresponsive” when found, has been pronounced dead at a hospital. The Coast Guard says the ship sank and that the captain is still missing. The Bounty, a replica of an 18th century tall ship, was featured in the 1962 film “Mutiny on the Bounty.”

Sandy killed at least 65 people in the Caribbean last week before it moved toward the United States.