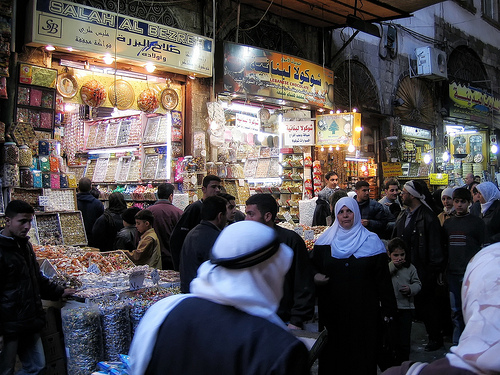 DAMASCUS — The Spice Market of Old Damascus is a strange sight in a country ravaged by civil war.

The military pounds pro-rebel towns ringing the capital, but here at its heart, business is brisk.

Naiem Bezraa stood in the shop once owned by his father and grandfather, topping off neat pyramids of cumin and dried peppers, pine nuts and almonds.

Bezraa said work carries on, but prices have gone up, affecting both customers and business. But he said, “Thank God,” his supplies are still coming in.

Syria’s economy has suffered severely from 18 months of conflict. Bezraa conceded that people are cutting back, sticking mainly to buying essentials. Customers on this ancient, bustling alleyway complain that foreign products are especially expensive.

A man who declined to give his name carried several full shopping bags, noting the price of imported goods is high. But he said locally manufactured products have risen less.

Government economist Afif Dala said Western sanctions, slapped on Syria for its crushing response to the uprising, have taken a toll.

In the city’s Hamadeya bazaar, its roof still pockmarked with the bullet holes of French colonialists putting down an earlier uprising, shopkeepers also said business is down.

At a scarf shop, Abdel Rehim tried to entice customers by elaborately twisting a hijab for display. Finally, a group of young women approached and a sale was underway.

Rehim said it is “a very difficult atmosphere – the atmosphere of crisis.”

Still, with the bulk of his stock made in Syria, he is able to keep the shelves stretching to the ceiling behind him, replenished.