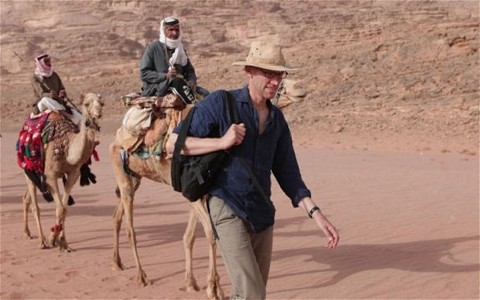 CAIRO – A new British TV program about the history of Islam is sparking a heated controversy in Britain, amid accusations to the author of ignoring historical evidences on the origins of the Islamic faith.

“(Tom) Holland appears to have turned a blind eye to rich Islamic historical tradition,” the Islamic Education and Research Academy said in a lengthy paper cited by The Daily Mail on Sunday, September 2.

Authored by historian Tom Holland, a new program about the history of Islam was aired last week on Channel 4.

The program, “Islam: the Untold Story”, shows the historian garbed in Indiana Jones-style, tricking across the Arabian Peninsula, talking to local Bedouins and inspecting historical artifacts on the origin of Islam.

The author concludes that Prophet Muhammad (peace and blessing be upon him), probably never came from Makkah, claiming that the Noble Qur’an makes little or no reference to the holy city.

He also questions whether Islam ever really existed as a distinctive, coherent faith during Prophet Muhammad’s reign.

But the program sparked angry reactions, with many Twitter users accusing the British author of trying to destroy Islamic history.

Other angry users accused Holland of being a ‘fool’ for suggesting Islam is a ‘made-up religion’.

The program lured nearly 550 complaints to both the television regulator Ofcom and Channel 4 itself.

This is not the first program about Muslims on the British TV that sparked controversy.

Last week, a comedy sitcom produced by the BBC, “Citizen Khan”, has caused uproar among British Muslims, with some hail it for correcting stereotypes and others accusing the show of ridiculing and insulting Islam.

Defying critics, the British author argued that Islam is a legitimate subject of study.

“The origins of Islam are a legitimate subject of historical inquiry and this film is wholly in keeping with other series and programs on Channel 4,” Holland said.

“We were of course aware that we were touching deeply-held sensitivities and went to every effort to ensure that the moral and civilizational power of Islam was acknowledged.”

But, the Islamic Academy accused the author of ignoring clear historical evidences on the origins of Islam, some of which were included in early Christian chronicles in the seventh century.

“Tom Holland’s assertion that there is no historical evidence for the seventh century origins of Islam is historically inaccurate,” it said.

“This notion cannot be sustained in light of the contemporary non-Islamic as well as material evidence.

“Holland’s presentation was clearly biased in the program, as he ignored other scholarly views that would call his approach into question.”

British Muslims, estimated at 2.5 million, have complained of media campaigns to tarnish their image.

A recent government-commissioned study has found that a torrent of negative and imbalance stories in the British media demonize the sizable Muslim minority and their faith by spreading prejudices and portraying them as the enemy within.

An earlier British study had accused the media and film industry of perpetuating Islamophobia and prejudice by projecting Muslims as violent, dangerous and threatening people.