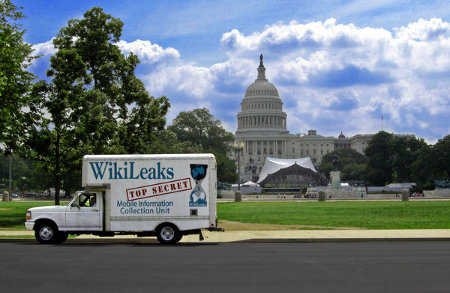 Hot Air Day is upon us. On July 4 hot air will spew forth all over the country as dignitaries deliver homilies to our “freedom and democracy” and praise “our brave troops” who are protecting our freedom by “killing them over there before they come over here.”

Not a single one of these speeches will contain one word of truth. No speaker will lament the death of the US Constitution or urge his audience to action to restore the only document that protects their liberty. No speaker will acknowledge that in the 21st century the Bush/Obama Regime, with the complicity of the Department of Justice, federal courts, Congress, presstitute media, law schools, bar associations, and an insouciant public have murdered the Constitution in the name of the “war on terror.”

As in medieval times, American citizens can be thrown into dungeons and never accounted for. No evidence or charges need be presented to a court. No trial is required, and no conviction.

As in tyrannies, US citizens can be executed at the sole discretion of the despot in the Oval Office, who sits there drawing up lists of people to be murdered.

Protestors exercising their constitutionally guaranteed rights to freedom of speech and freedom of association are attacked by armed police, beaten, tasered, tear-gassed, pepper sprayed, and arrested.

Whistleblowers who report the government’s crimes are prosecuted despite the statute that protects them.

US soldier Bradley Manning, who allegedly gave Wikileaks the documents revealing US war crimes, including the video of US soldiers in a helicopter gunship enjoying themselves murdering civilians walking along the street as if the soldiers were playing a video game, has been arrested and held in conditions of torture while the government tries to invent a case against him.

According to the US Military Code, US soldiers are required to make war crimes known. However, the law on the books provided no protection to Bradley Manning, and conservative Republicans whom I know are foaming at the mouth for Manning to be executed for letting out the truth. The truth, what is mere truth compared to the “exceptional-ism of the great American people”? America has carte blanche to do whatever it wishes to the unexceptional peoples. Manning deserves to die, they say, because he took the side of the oppressed and not the side of the amerikan oppressors.

After the Swedish prosecutorial office dropped the case against Wikileaks’ Julian Assange, ruling that the charges of rape had no foundation, another prosecutor, many believe at the urging of the US government, demanded Assange be extradited from England in order to be questioned. Normally, extradition only applies to those who have been charged with a crime and for whom a warrant has been issued, which is most certainly not the case with Assange. But, of course, if Washington wants Assange, Washington will be sure every law is broken or bent until they get him. The Swedish puppet will do the exceptional country’s will and be paid well for its service.

Peace activists in several states had their homes invaded by FBI, computers and personal records taken, and a grand jury was convened in an attempt to indict them for supporting terrorism by their protests of Washington’s illegal wars, wars that are war crimes under the Nuremberg standard established by the US government itself.

None of this will be mentioned in July 4 patriotic speeches. The inebriated masses will be wrapped in the flag and return home full of the hubris that despises lesser foreigners, such as Muslims, Arabs, Chinese, and the French.

And no dignitary will mention that those that “we are killing over there” are mainly women, children, village elders, and aid workers. The US troops seem to specialize in soft targets like weddings, funerals, kids’ soccer games, farm houses, and schools.

Recently Washington reduced the “collateral damage” count by declaring every murdered male of military age to have been a Taliban fighter or terrorist. Obviously, Washington has no way of knowing whether they were or not, but Washington’s declaration is intended as a green light to murder Afghan males of military age.

Currently, Washington has wars underway, or occupations, or is violating the sovereignty of countries with drones and/or troops in seven Muslim countries, and is arming rebels in Syria. All of this is being done without the constitutionally-required authorization by Congress, allegedly the people’s representatives. What a joke!

In short, in “freedom and democracy” America, the people have no voice and no rights and no representatives.

Yet, this huge deficit of democracy and liberty will pass unmentioned by July 4th orators.

The crimes against humanity, the dismantling of the US Constitution and the lawlessness both domestic and international that define 21st century amerika are the results of September 11, 2001.

These humble Saudis of no known distinction or powers also simultaneously outwitted the National Security Council, NORAD, the Pentagon, Air Traffic Control, and caused Airport Security to fail four times in one hour on the same morning.

In other words, every part of America’s defenses failed at the same moment.

Think about that for a minute. If such a thing had actually happened, the President, Vice President, Congress, and media would have been demanding to know how such universal failure of every aspect of the national security state was possible. An investigation would have started immediately, not over a year later as a result of pressure from 9/11 families who could not be bought off with monetary payments. Such complete and total failure of every aspect of US security would mean that Americans were not safe one single minute during the 40-year stand-off with the Soviet Union. At any moment the Soviets could have utterly destroyed the US and we would never have known what hit us.

In a real investigation, the 9/11 evidence would not have been illegally destroyed, and the investigation would have been conducted by experts, not by government agencies assigned a cover-up and by political hacks. The NIST report is abject nonsense. It explains nothing. It is a fabricated computer simulation of a non-event. The co-chairmen and legal counsel of the 9/11 Commission later wrote books in which they stated that information was withheld from the commission, the military lied to the commission, and the commission “was set up to fail.” Yet, these astounding admissions by the leaders of the 9/11 Commission had no impact on Congress, the presstitute media, or the public. All heads were in the sand. Please, whatever you do, don’t make us emotional weaklings face the facts.

More than one hundred firefighters, police, first responders, and building maintenance personnel report hearing and experiencing scores of explosions in the twin towers, including powerful explosions in the sub-basements prior to the collapse of the towers.

Distinguished scientists, authors of many peer-reviewed scientific papers, report finding unreacted nano-thermite in the dust from the towers, tested it for its explosive and high-heat producing ability, and reported the unequivocal results.

Seventeen hundred architects and engineers have testified in a petition to Congress that the three World Trade Center buildings were not brought down by fire and airplanes and have demanded a real scientific investigation of the cause of the buildings’ destruction.

Yet, we are left with the paradox that scientific opinion based on careful examination of the remaining evidence has been designated by the ignorant and unwashed as a “conspiracy theory,” while Washington’s absurd conspiracy theory stands as the truth of the event.

Architects and Engineers for 9/11 Truth headed by high-rise architect Richard Gage has driven the final nail in the coffin of Washington’s concocted conspiracy theory with its new film: “9/11: Explosive Evidence — Experts Speak Out,” and they do speak out. Scores of top level demolition experts and experts on the design, engineering, and construction of high rise steel structures provide the scientific, architectural, and engineering reasons that the three World Trade Center buildings came down only with the assistance of explosives that were placed and timed to remove the powerful structural support and permit the sudden collapse of the buildings. As the buildings were engineered and constructed according to known and tested principles that absolutely prevent rapid collapse, fire and structural damage that two of the three skyscrapers suffered from airliners could not possibly have caused the sudden disintegration of the three buildings.

I saw the film in Atlanta on July 2. Atlanta was a stop on the 32-city premier of the film. The film was shown at the 7 Stages Theater on Euclid Avenue, the former Euclid Theater to which 65 years ago we kids used to ride our bikes to see Tarzan battle giant reptiles and ride elephants to victory over evil black tribesmen or evil white hunters, or to watch Randolph Scott bring justice with his six-shooter to a town ruled by black hats, or to witness the brave American soldiers liberate Europe from the Nazis. We never dreamed that we, residents of the “land of the free” would be menaced by a gestapo police state.

America’s descent into a gestapo police state could be arrested, perhaps, if americans were not so ignorant of science or were capable of even realizing that what they see with their own eyes when they watch videos of the twin towers’ destruction is buildings blowing up, not buildings falling down from structural damage. Building 7’s destruction is the total and complete picture of controlled demolition.

At the end of the powerful film, psychologists explain why the majority of a population lacks the mental and emotional strength to confront highly disturbing facts. A government that so thoroughly spies on its population as Washington does obviously knows its population’s profile and sees nothing but weakness and fear that can be manipulated.

What fact is more disturbing than the likely fact that 9/11 was a false flag event designed to provide the neoconservatives with their “new Pearl Harbor” in order to launch Washington’s Wars of Hegemony in the Middle East, and from there to Iran and to the nuclear powers: Russia and China, which are being encircled, as Iran has been, with US military bases?

Washington’s “wars of liberation” are wars of world hegemony and wars of massive profits for the military/security complex. The combination of power and money that are the motives for Washington’s concocted wars are hidden motives, wrapped in the flag, patriotic sentiments, and fear of dark-skinned demonized Muslims.

Can Architects and Engineers for 9/11 truth or any truth break through and liberate Americans from the artificial reality created by government liars and a corrupt presstitute media, or are Americans doomed to expire in the Matrix that has been created for them?

Perhaps the hope is that the economy will collapse under the would-be hegemons, and people who will not fight for principles and their liberty will fight for their economic survival.

© PaulCraigRoberts.org. This article has been published with the permission of the Institute for Political Economy, Dr. Robert’s blog.

Paul Craig Roberts is an American economist and a columnist for Creators Syndicate. He served as an Assistant Secretary of the Treasury in the Reagan Administration earning fame as a co-founder of Reaganomics. He is a former editor and columnist for the Wall Street Journal, Business Week, and Scripps Howard News Service who has testified before congressional committees on 30 occasions on issues of economic policy.