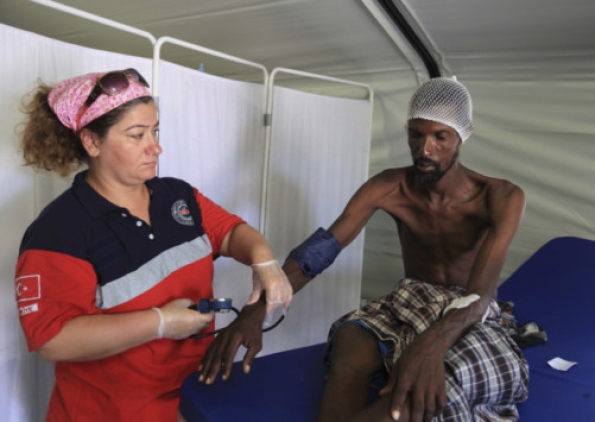 IN A sprawl of plastic refugee shelters and blasted buildings in Mogadishu, a mud-caked Turkish engineering team monitors the drilling of a borehole while their guards chat lazily under a tree, guns across their laps.

These government contractors are on the frontline of a huge Turkish development effort in one of the world’s most dangerous cities – one which UN agencies and international charities prefer to deal with from the safety of neighbouring Kenya.

Across the Somali capital, wrecked after two decades of fighting, residents say Turkey has done more in eight months to shatter the perception that Mogadishu is a no-go zone than the international community has achieved in 20 years.

“Our government likes to help anyone in crisis so we came here,” said the lead engineer.

The retreat of al Qaeda-linked rebels from the city in August ended the daily street battles and shelling between the militants and African troops. About 500 Turkish relief workers and volunteers then poured in.

The engineer said: “Of course it is dangerous but we don’t think about those things … If we are afraid, we can’t operate.”

A hotspot in the US-led war against militant Islam, Somalia offers Ankara an opportunity to bolster its image as a soft power on the global stage.

Beneath Mogadishu’s gutted parliament building, Turkish medics perform surgery in a packed field hospital. “We come here with our hearts, not for money,” said one doctor rushing between the tented wards.

And their access, it seems, has nothing to do with religion – the Islamist al-Shabaab militant group has denounced Muslim Turkey’s involvement as a “cover for the Western invaders”.

Mogadishu’s central Hodan district was at the epicentre of a protracted battle between Islamist rebels and African Union forces deployed to prop up the UN-backed government. Now building sites are mushrooming.

“I’d never seen anything like it before,” said Dr Osman Abdirahman Mohamed, who left Somalia during the war to train and work first in Pakistan and then in California. He returned to Mogadishu in 2010.

From behind the counter of his well-stocked pharmacy kiosk, Mohamed Nur lauded Turkey’s “visible projects”.

He said: “Other governments say they will come but they are not serious.

“The Turkish government said it would come and started operating immediately.”

Privately, some western aid officials question what deals Turkish aid and reconstruction groups might be agreeing to operate with such apparent speed and ease in Somalia.

Torn between frustration and envy, one aid worker in Nairobi said Turkey’s achievements were making others look like “fools”.