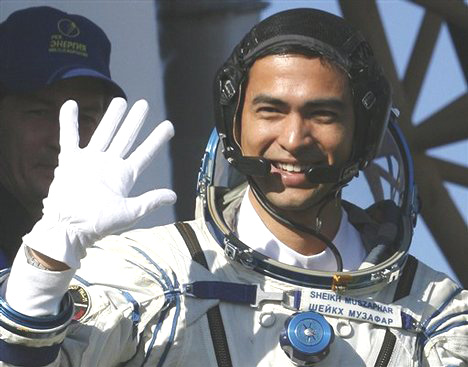 Malaysian astronaut Dr. Sheikh Muszaphar Shukor travelled to space as the ninth Muslim astronaut to show how a prayer could be made in space.
“Everyone who goes to space feels a miracle. During my trip in space that took place in the holy month of Ramadan, I heard a ‘call to prayer’ in the Space Station,” Shukor said in an interview with Anatolia news agency.

“Time for fasting and prayer depends on where you are situated in space. As the space shuttle was launched from Kazakhstan, we took into consideration the local time in Kazakhstan. I prayed five times a day by taking into consideration the time in Kazakhstan. You had to turn your face toward the earth in order to pray in the direction of Mecca. The Space Station was in a position from where you could see the earth directly,” said Shukor who has visited Turkey as the guest of Turksat Corporation.

“Malaysia aims to send humans to space in order to encourage the youth to work on space issues. Malaysia wishes to train more doctors and scientists in the next 5 to 10 years. This was the main goal of the program.”

Out of 11,435 individuals, only three men and one woman were selected for the space trip.

Shukor said they had worked in space on cancerous cells. About 80 percent of their experiment has been completed, he said. “Once the results have been reached, we will inform the public about our study that will be published,” he added.