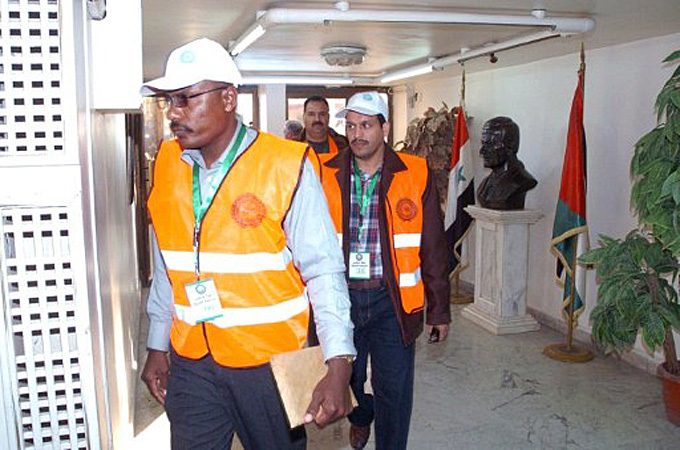 A handout picture released by the Syrian Arab News Agency (SANA) shows Arab League observers walking in a government building during their visit to Daraa in southern Syria, on December 29, 2011. Arab observers were expanding their mission to implement an Arab League peace plan as internet activists urged regime opponents to take to Syria's streets on December 30, 2011 for the traditional Friday of mass protests, despite unrelenting bloodshed. AFP PHOTO/SANA/HO 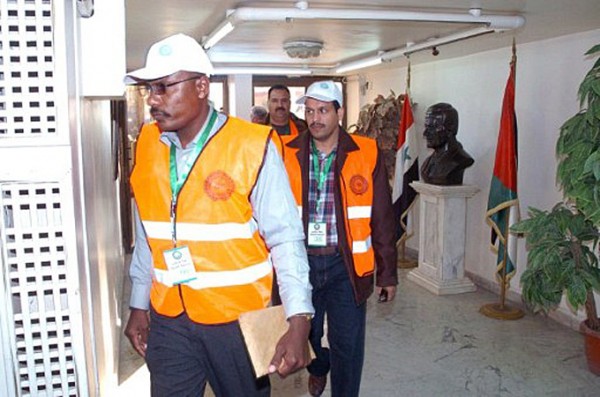 Princeton, NJ – Looking back to 2011, the effect of the Arab Spring is still lingering. People have risen in Tunisia, Egypt, Bahrain, Yemen, Libya and Syria and initiated a worldwide quest for political rights and social justice. Once characterised as politically and economically stagnant by neo-Orientalists, the Arab world set the regional and international agenda of the last year.

From Madrid to the Occupy Wall Street mobilisations throughout the US, a powerful source of inspiration was found in the courage and determination shown by protesters in Arab capitals. After 10 months of popular uprisings, the revolution in Syria is still struggling to achieve its goals. The crisis is becoming internationalised. Arab human rights envoys have been “monitoring” the situation, while repression continues as usual.

Videos smuggled out by a new breed of “citizen journalists” have revealed the sad and highly symbolic image of a five-year-old boy’s dead body, pictures of which have been placed besides the Arab League’s logo. It is questionable at this stage whether the organisation has the capacity to enforce effective control and change.

Voices are now increasingly calling for foreign intervention and military solution. On December 20, 2011, the Syrian National Council (SNC)’s leadership requested the establishment of “safe zones for civilians and the establishment of humanitarian corridors for delivery of relief, medical and other humanitarian needs”, as well as “prompt intervention to stop the massacres”.

In this, the SNC repeated earlier appeals by the Free Syrian Army for a no-fly zone, as well as a few scattered calls in the street. The plight suffered by civilian protesters has indeed reached an unbearable level. This raises questions about how to achieve lasting change in Syria.

Foreign intervention paves the way for a dangerous strategic choice that opposition movements within and outside Syria should carefully weigh. It will be argued here that the struggle for change needs to be fought from within and transition to democracy peacefully implemented. This implies that foreign military intervention should, under all circumstances, be ruled out; domestically, resistance to the regime should also remain unarmed.

It is safe to say that the majority of the Syrian population has been appalled by the “solutions” implemented in Iraq and Libya. American troops have finally withdrawn from Iraq, leaving several hundred thousands of Iraqi civilian casualties in their trail, a million refugees and a country in shambles and civil war. The Saddam Hussein regime was successfully toppled but the cost of change is still paid by the population.

Libya is in turmoil and the spoils of war remain a source of conflict between internal and external powers. A closer examination of some of the international sources calling for foreign intervention is also required. Despite NATO’s unwillingness to reiterate the Libyan scenario and the current focus on domestic politics in the American presidential campaign, neoconservative think-tanks with a history of pro-war advocacy within the US have been active in keeping military intervention on the table.

Published on December 14, 2011, a report by the Washington Institute for Near East Policy, a foreign policy neoconservative think-tank, provides an “assessment of military intervention in Syria”. The authors, a visiting fellow from the US Air Force and two military and security affairs specialists, identify the risks and challenges of different covert and overt operations, whilst evaluating Iran’s response.

On December 21, 2011, an open letter was sent to President Obama, advocating the adoption of “crippling multilaterally-based sanctions on the Syrian government”, “increasing the capabilities” of “anti-regime Syrian groups… whose political goals accord with US national security interests” and finally “working with Turkey and other partners to establish safe havens in Syria, as well as no-go zones for the Assad regime’s security forces to protect civilians”.

The letter was drafted by the Foreign Policy Initiative, another Washington-based think-tank that has regularly called for a greater US role in the Syrian crisis. Interestingly enough, on November 8, 2011, the same foundation issued a joint paper with the Foundation for the Defence of Democracies which outlined “policy options for the US and like-minded nations to further assist the anti-regime opposition”.

The paper sought to impose “crippling sanctions” on the Syrian government and provide assistance to opposition groups and impose no-fly/no-go zones in Syria. Foreign Policy Initiative is the successor of the New American Century, a group that has successfully advocated for the Iraq War, with well-known neoconservative pundits such as Robert Kagan, William Kristol, Dan Senor and Douglas Feith, the former Under Secretary of Defence for Policy in the Bush administration and the mind behind the war on terror, US military prisons in Iraq and the Administration’s special relations with right-wing parties in Israel.

The petition submitted to President Obama was signed by the latter, in addition to Tony Badran from the Foundation for the Defence of Democracies, Paul Bremer, the diplomat in charge of overseeing Iraq’s occupation after the 2003 invasion, Representative Eliot Engel, sponsor of the Syria Accountability Act of 2003… and a few US-based Syrian expatriates. It appears that the US National Security Council has already been instructed to look into different options for American intervention in Syria. In addition to humanitarian corridors, these would include the establishment of safe zones through military action.

The long-term goal is clearly strategic: to tame Syria as a key regional player by seizing this moment of internal instability in order to shape the country’s geopolitical links. At stake is the larger game currently played between a broad American-Saudi-Israeli coalition of interests and the Iran-Hezbollah-Hamas triangle. The future of Syria also lies in the balance.

In a surprising interview with the Washington Post on December 1, 2011, the SNC’s president, Burhan Ghalioun, appears to have played into this game, by committing to sever relations with Iran, Hezbollah and Hamas if offered a future political position. By reiterating his support to the Syrian regime in a time of brutal repression, Hezbollah’s leader, Sheikh Hassan Nasrallah, has indeed bitterly disappointed many Syrian activists who see no contradiction between fighting a ruthless regime in Syria and supporting the Palestinian and Lebanese resistance movements.

Syrians are known in the Arab world to be patriotic and particularly sensitive to the fate of their Palestinian fellows. The return of the Israeli-occupied Golan Heights to Syrian sovereignty will remain a priority for any government seeking internal legitimacy. The SNC appears to have felt the pulse of criticism after Ghalioun’s comments. Issued after the first Congress held in Tunisia, the Council’s final declaration emphasised on December 19, 2011 that the “new Syria would restore national sovereignty to the Occupied Golan Heights and support the complete and legitimate rights of the Palestinian people”.

The lesser of two evils

The cost of not intervening is certainly high. The UN estimates more than 5,500 civilian casualties and thousands of disappearances. The repression launched by the regime has been fierce and multifaceted. The objective was to restore the veil of fear that Syrians have so bravely managed to tear down.

The regime is still in control of the army and the security forces, despite a few thousand defections to the Free Syrian Army. To deter future dissent, tortured bodies have been found or returned to families. The regime’s increasing violence is also leading to the collapse of institutions and public authority. Declining incomes from oil sales and the public sector, and a freeze on trade with Turkey and the European Union are impacting on the population rather than the regime.

Most regions have no heat as fuel oil has becomes scarce or even non-existent. Prices have risen dramatically and electricity is being cut on a daily basis for six hours in major hubs such as Aleppo. Protesters’ have shown lucidity in keeping a united front beyond sectarian divides, but resistance to the regime has moved in some parts of the country from non-violent rebellion to armed insurgency. Six-hundred soldiers were allegedly killed in the clashes. The risk of civil war is looming. Syrians are now killing each other in isolated incidents on the basis of their uniforms, alleged loyalties and religious affiliations.

The Syrian insurrection has drawn momentum and power from its capacity over the last months to mobilise peacefully and claim ownership of the uprisings. Armed resistance could feed into official rhetorics on foreign-led insurgency. If the country was forced to accept an externally imposed no-fly zone or safe haven, the parts of the population that have so far kept away from the struggle would side with the regime in a surge of national pride and solidarity.

The best strategy would be to sustain domestic direct actions that preserve the dignity and legitimacy of the uprisings. The literature on non-violent direct action identifies a set of defensive strategies that could be effectively used: boycotts, strikes, marches, civil disobedience, public disclosure of violence and safe spaces within and outside the country (without the military enforcement needed for no-fly zones).

Inspiration can be drawn from Ghandhi’s movement in India, Mandela’s freedom campaigns in South Africa, human rights movements in Guatemala, Argentina and Latin America, and the non-violent parts of the Palestinian Intifada. Instead of fearing the cost of change, the Syrians that are still ambivalent would realise the cost of resistance to change – in other terms, increased regional and international isolation, political chaos and economic hardship at home.

Some of these strategies have already been successfully implemented in Syria: launched on December 11, a general strike was widely followed and calls for civil disobedience were successful in leading to poor turnout at legislative elections. Recently, the general strike in the Douma quarters outside Damascus led public authorities to force shops open.

In parallel, human rights fact-finding missions would continue to be imposed on the regime to sustain international scrutiny and prevent further repression. With time, sanctions targeted at the inner circles of power, rather than the country’s national economy, would impact on the regime’s alternatives.

In keeping to its spirit and independence, the Syrian Revolution would remain just, powerful and legitimate. Only as such can it win the hearts and minds of all Syrians; and only as such can it lead to genuine and peaceful transition to democracy.