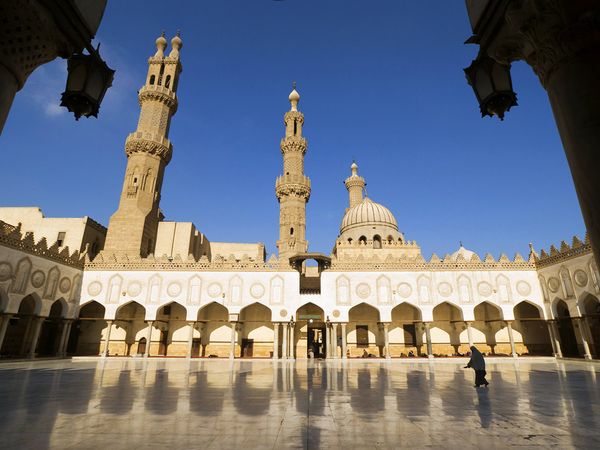 CAIRO (AP) — The head of Al-Azhar, the pre-eminent institute of Islamic learning in the Sunni Muslim world, put forward a Bill of Rights on Tuesday upholding freedom of expression and belief ahead of the drafting of Egypt’s new constitution.

The bill, which was in the works for three months in collaboration with secular and Islamist thinkers, is a bid by Al-Azhar to assert its role as the voice of moderate Islam in the face of growing political power of more conservative Islamic groups in Egypt following the February ouster of President Hosni Mubarak.

The conservative Muslim Brotherhood, Egypt’s most organized political force, and the more radical ultraconservative Salafis, have won a majority in the country’s first elected post-Mubarak parliament. Both call for an Islamic basis for the state, raising worries among Egypt’s liberal and Christian groups that conservative religious teachings will dictate the shape of the new constitution. In theory, parliament is to be in charge of nominating who will draft the document.

The Al-Azhar document is the latest in a series of moves by the institution to raise its profile as Islamists rise to political prominence — and to rehabilitate its own image after decades of being seen as a tool of Egypt’s regime. Secular Egyptians, liberals and Christians, in turn, have welcomed its role, hoping it will give religious support for preserving broader democratic rights that they fear conservatives will try to limit. A previous document by Al-Azhar, also backed by intellectuals, supported the Arab revolutions and the public’s rights to democratic change.

“This document has a moral strength because it has the backing of Al-Azhar scholars, the weight of Al-Azhar institute and the critical role of intellectuals,” said Nabil Abdel-Fattah, a senior researcher on religion at the state-sponsored Al-Ahram Center for Political and Strategic Studies. “The aim is to put forward a moderate Islamic vision” in the face of rising power of radical Salafi interpretation of Islam.

Al-Azhar’s Sheik Ahmed el-Tayeb told reporters the bill of rights, which preserves freedoms of worship, opinion, scientific research and art and creative expression, is drafted to be a basis for the country’s new constitution, according to comments published by Egypt’s state news agency.

He said that Islamic rulings protect freedom of religion and guarantee equal citizenship rights, in a message to Egypt’s increasingly nervous Christian minorities.

However, Abdel-Fattah, who was part of the discussion over the bill of Rights, criticized some wording in the document which appeared designed to also allay fear of conservative Islamists.

The document said freedom of the art must not “contradict religious sentiments and established social mores.”

Abdel-Fattah said such wording “are a source of weakness and undermine the principles of the document by subjecting art to censorship from religious leaders or even common people.” During Mubarak’s rule, Al-Azhar blacklisted a number of novels and other books because of what it considered violations of religion.

Al-Azhar once wielded tremendous influence among millions of Sunni Muslim worldwide, offering guidance on issues of faith in Egypt and other Islamic nations through its extensive network of Islamic schools, a university and religious institutes that open their doors to Muslims from around the world. It lost much of that influence in part because of its close cooperation with Mubarak’s regime, raising criticism that it has become a tool in the hands of autocratic leaders.

The head of Al-Azhar was appointed by the state. El-Tayeb was a member of the now dissolved ruling party and initially opposed the wave of protests that erupted on Jan. 25 against Mubarak’s rule and led 18 days later to the president’s ouster.

Al-Azhar’s influence was also challenged by the growing more independent religious groups who became the most influential opposition to Egyptian leaders, some of them even espousing violence.

Mubarak stepped down after unprecedented popular protests organized by mostly middle-class urban youth groups calling for freedom, justice and improved human rights. Since then, however, the Brotherhood and the Salafis have emerged as the most powerful political players, alongside the ruling military council, which took over from Mubarak.

Since Mubarak’s fall, many in Egypt have looked to Al-Azhar as a way to balance out the more radical groups, and restore its place as the center of Islamic teachings.

New proposals discussed currently call for the election of Al-Azhar leader and the core group of scholars to allow them more independence from the state. The learning institute is also studying prospects of setting up its own TV station, to counter the multiple private ultraconservative stations that propagate the thought of independent clerics, many of the Salafis.