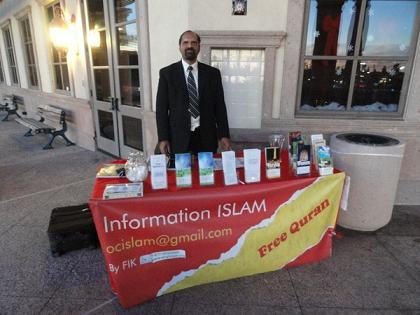 Offering an answer to skeptical Americans, a leading Islamic group has launched a new initiative to clear long-held misconceptions about Islam by handing out free copies of the holy Qur’an and Islamic pamphlets in front of public libraries.

“There’s a lot of misinformation about the Qur’an,” Mohammad Mazhar, a member of the Islamic Circle of North America, told Rancho Santa Margarita Patch on Friday, January 6.

“People mix up the culture of a country and Islam, which is a religion. … They hear it from the media, which doesn’t always tell the truth.”

Under the initiative, the event extended over two day, Thursday and Friday, from 2 pm to 5 pm, with only one goal to share an explanation of Islam.

The offer of a free Qur’an was hard to miss at a table outside the front entry of the Rancho Santa Margarita Public Library.

Some of the pamphlets that were available for people who wanted to know more about the Islam, including its stance on terrorism and Jihad.

In addition to Rancho Santa Margarita, ICNA has been to four other libraries in the OC Public Library system.

ICNA sought permission to go to the libraries, but learned that it wasn’t necessary.

“I’ve asked them to let me know where they’re going to be and when so that I can make the staff aware that they have a legal right to be there,” Paula Bruce, assistant librarian for the Orange County Public Library system, said.

“So far, they have complied.”

US Muslims, estimated at between six to eight million, have been sensing a growing hostility following a hearing presented by Republican representative Peter King on what he described as “radicalization” of US Muslims.

A recent report by the Council on American-Islamic Relations, the University of California and Berkeley’s Center for Race and Gender found that Islamophobia in the US is on the rise.

A US survey had also revealed that the majority of Americans know very little about Muslims and their faith.

A recent Gallup poll had found that 43 percent of Americans Nationwide admitted to feeling at least “a little” prejudice against Muslims.

Standing outside libraries, ICNA members wanted to reach out to intellectuals who were willing to know more about the true nature of Islam.

“We are looking for the readers,” Raihana Mazhar’s colleague at the Orange County, said.

“Most people are well-educated and they want to know what Islam is, especially the youth,” he said.

“They’re open-minded and want to know. They can pick up a pamphlet and ask questions.”

The pamphlets on display covered a number of subjects, including the relationship of Muslims to Christians and Jews, human rights, status of women, the afterlife, worship and one titled “What does Islam say about terrorism?”

Included in the latter: “Often, the religion of Islam is held responsible for the acts of a fringe minority among Muslims.”

Mazhar said the reaction Thursday at the library was good, and over six hours they gave away “eight or nine” copies of the Qur’an.

Mazhar said he and Raihana talked to about 15 people who approached them, and that a primary interest was understanding Islam and clarifying what it is.

“We just give the message of Islam,” Mazhar said.

Having unusual scene of the Free Qur’an table outside their library, RSM branch librarian Sheila Stone said she hadn’t heard of any complaints about ICNA’s presence outside the front entry.

“Their goal in doing the tabling is to provide educational material to the public about Islam, and we do periodically get organizations that are interested in tabling in front of the library,” Bruce said.

“Any public place, they have the right to be as long as they’re not interfering with the flow of traffic or accosting people. No one is obligated to take the literature.

“Some people are curious and find it interesting, but there have been no real complaints.”