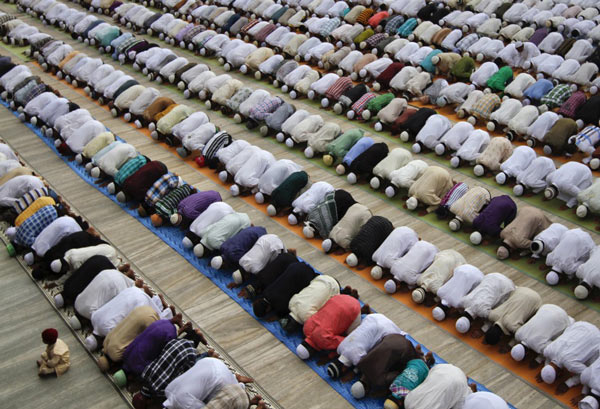 In the Name of Allah, Most Merciful and Compassionate.

All praise is to Allah, Lord of the Worlds.

And the blessings and peace of Allah be upon His Chosen Messenger, the Prophet Muhammad, his family, companions, and followers.

The word Eid itself is an Arabic word, whose root connotation is ‘that which comes back, time after time, and rejoicing.’ Its particular usage in Islam, for the two major holidays, is because these two days are meant to be days of rejoicing.

The Prophet Muhammad (Allah bless him and give him peace) said, “They are days of eating, drinking, and remembrance of God.” [Reported by Bukhari in his Sahih, an authoritative collection of the sayings of the Prophet.]

In this same spirit, the Qur’an mentions that, “Jesus, son of Mary, said: ‘O Allah, Lord of us! Send down for us a table spread with food from heaven, that it may be a feast (eid) for us, for the first of us and for the last of us and a sign from You. Give us sustenance, for You are the Best of Sustainers.’”(Qur’an, 5: 114)

Eid al-Adha is meant to be a recognition the material and spiritual favors of God to His creation, manifested by the ritual slaughtering necessary for all able Muslims to perform, following the sunna (way) of the Prophet Ibrahim (peace be upon him).

This is a manifestation of total submission to the command of Allah: one submits one’s mind, wealth, and body to the Command and Pleasure of Allah. On this day, Muslims all over the world thank God for the gift bestowed on them.

The lessons of the way of the Prophet Ibrahim, where, in utter submission to the Divine Command, he was about to slaughter is very own son, until at the last moment Allah sent an animal to be slaughtered instead, are many:

In this and other ways, Muslims seek to join between worldly and spiritual celebration, for it is said, “True rejoicing is not (merely) in wearing new clothes, but in becoming true in one’s devotion to Allah.”

The Prophet (Allah bless him & give him peace) said, “For every people there is a feast and this is our feast.” [Reported by Bukhari in his Sahih]

The Fiqh of Eid al-Adha

1. The Eid Prayer is wajib. It consists of two rakats, with extra takbirs. The wisdom behind the Eid prayers, like the Eid days themselves, is to thank Allah for His countless blessings.

2. After the Eid prayer, there is a khutba. It is necessary to listen to this khutba, and everything disliked in the Friday khutba is disliked here.

3. In the first rakat of the Eid prayer, one gives 3 additional takbirs after the opening takbir and opening supplication but before reciting the Fatiha. One should raise one’s hands with each takbir (to one’s earlobes), as one does with the opening takbir.

After each takbir, one lets one’s hands rest at one’s sides.

One pauses briefly after each takbir.

One places ones hands together, right on left under the navel, after the third and final takbir.

After this, one recites the ta`wwudh (seeking refuge in Allah from Satan), says the basmala (Bismillahi al-Rahman al-Raheem), and recites the Fatiha and another surah, as normal. The rest of the rakat is the same.

4. In the second rakat of the Eid prayer, one also gives 3 additional takbirs. These are given after one finishes reciting the Fatiha and Surah. They are like the first rakat’s takbirs, except that one leaves one’s hands to one’s sides after the third takbir, after which one gives one’s normal takbir for going into ruku, without raising one’s hands.

5. This is the sunna way of giving the takbirs in the Hanafi school.

However, if one’s imam performs them differently, one follows one’s imam: the sunnah practice has been reported in different ways, and the difference between the Sunni schools on this is in terms of optimality, not validity.

8. The latecomer, who misses the additional takbirs with the Imam, should perform the takbirs immediately, even if the Imam is reciting.

9. If one joins the imam while he is in ruku`, one should perform the additional takbirs while standing if one will be able to catch the imam in ruku`.

Otherwise, if one fears not catching the imam in ruku`, one should give one’s opening takbir and go into ruku`. Then, one should recite the additional takbirs in ruku` before the tasbihs of ruku`. One does not raise one’s hands in ruku`, however.

10. If one misses a rakat of the Eid prayer, one says the additional takbirs after the recitation. This is how it has been established through the practice of the Companions of the Prophet (Allah bless him and give him peace).

The Sunnas of the Day of Eid

The sunnas of the Day of Eid al-Adha include:

1. To adorn oneself according to the Shariah, by:

a. Performing ghusl (this is a confirmed sunnah for the Eid prayer);

b. Brush one’s teeth, using a miswak if possible;

d. Wear the best clothing one possesses, without excess. White, when available, is optimal;

2. To wake up early, in order to prepare for the sunnas of the day;

3. To go early to the place the Eid prayer is taking place;

4. To delay eating until after the Eid al-Adha prayer;

5. To return from the Eid prayer by a different route to the one taken there, as established by the Prophet’s practice (Allah bless him & give him peace);

6. To walk, when reasonably possible without hardship;

7. To give the takbirs of Eid.