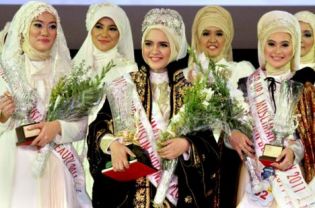 Dika Restiyani, top right, center, was crowned the winner of the first-ever Muslimah Beauty pageant in Jakarta on Tuesday. Dika was chosen from among 10 finalists in the contest, not only for her looks but also her success as an entrepreneur, her work for charity, her intellect and her ability to recite the Koran. (Photo courtesy of IIFC)

At the Puri Agung Grand Ballroom in West Jakarta last Tuesday, 10 young women appeared on stage in colorful hijabs and dresses. Sitting on the floor with an open Koran, they chanted the holy verses, mesmerizing the audience with their clear, sonorous voices.

The young women were all finalists of Muslimah Beauty 2011, a beauty pageant held for young Muslim women in Indonesia.

The contest aims to recognize the beauty and potential of young women who wear hijabs.

“In the Miss Universe contests, the candidates parade their bodies in revealing dresses,” Eka said. “But in this contest, they’re all covered. Not an inch of skin shows, except for their faces and hands.’’

Candidates for the pageant had to fulfill a number of requirements to enter. The contest was only open to Muslim Indonesian women between the ages of 18 and 24, over 165 centimeters in height, who wore the hijab every day, could read the Koran — in Arabic — and were fluent in another foreign language.

“The winners will be the fashion and beauty icons of young Muslim women in Indonesia,” Eka said before the event. “They’ll also represent Indonesian Muslim women to the world at large.”

Participants were required to register by August for the contest online, where they were asked to fill out registration forms and upload their pictures to the social media Web site DetikForum.com.

“The registration method was very effective,” said Arifin Asydhad, the Web site’s deputy editor in chief. “We received 1,170 registrations from almost every part of Indonesia.”

A selection committee chose 50 semifinalists based on their physical appearance, achievements and educational background.

Candidates from Jakarta, Bogor, Depok, Tangerang and Bekasi were then summoned for interview sessions in Jakarta, while those from farther away were interviewed over the phone. All entrants were also required to submit a video of themselves reciting the Koran.

Ten finalists were selected on Sept. 9 and placed under “quarantine” at Grand Sahid Jaya Hotel in Central Jakarta on Sept. 11-12.

“We call the quarantine period Manasik Kecantikan Hati [rituals for inner beauty],” Eka said. “During this period, all candidates performed sholat tahajud [early morning prayer] at 3 a.m. and studied the Koran together.”

The finalists also received a crash course in public speaking and modeling during their two days together.

On the third day, the pageant began. The contestants appeared on the runway as singer Fitri Wijayanti performed Islamic songs.

They looked radiant in glamorous yet modest dresses from fashion designer Boyonz Ilyas.

One by one, the participants introduced themselves in Indonesian and English.

From their list of achievements, it seemed that each one was more than just a pretty face.

Finalist Kholifah Nuzulia Firdausy told the audience about her work as an architect in Malang, East Java, the library she runs for disadvantaged children in the area and her postgraduate studies in architecture at Brawijaya University.

Another finalist, Dika Restiyani, told of how she frequently flies between Jakarta, where she does business and social work, and Singapore, where she studies at the Nanyang Technological University. Dika said has been running Flannel Box, a small home-business that produces and sells dolls, since 2006.

Dika also said that along with a group of friends, she manages Pelangi Anak Negeri (Children of the Nation’s Rainbow), an organization that provides education for street children in South Jakarta.

“In my opinion, true beauty comes from the inside,” Dika said. “A truly beautiful woman is someone who benefits and inspires other people.”

“I feel comfortable in a hijab,” Shayma said. “It protects me from exposure to matahari [sunlight] andmata laki-laki [men’s eyes],” the 18-year-old added with a smile.

Each contestant also performed an example of their talents.

Edy Putra Irawady, the deputy minister for trade and industry, commended all participants on their performances.

In the end, the jury declared Dika, the doll entrepreneur, as the winner of the pageant.

“I’m surprised and very happy,” said Dika, who applied for the contest at her friends’ recommendations but never expected to make it so far.

She was crowned with a silver tiara, designed by Irna Mutiara and encrusted with hundreds of Swarovski crystals.

As the pageant’s first winner, Dika received a savings account to set aside money for the hajj pilgrimage, a laptop computer, a mobile phone, a designer gown and a package of cosmetics.

She will now become the official spokeswoman for IIFC, both Indonesia and abroad. The nonprofit organization was established in July by the Indonesia Fashion Designers Association (APPMI), the Shafira Corporation fashion house, Noor Magazine and the media and communications-based Arzuda Group.

With IIFC and a group of Indonesian fashion designers, Dika will also have the chance to travel to Paris during her reign to attend the International Fair of the Muslim World from Dec. 23-25.

Next year, IIFC plans to expand the Jakarta pageant to an international one, to be called World Muslimah Beauty. The organization will invite candidates from 57 countries to participate.

“Indonesia has the largest Muslim population in the world,” Eka explained. “That’s why it should also be the Mecca for Muslim beauty and fashion in the world.”