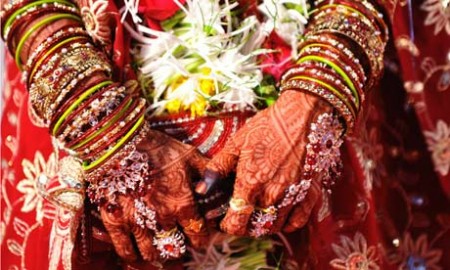 Divorce rates among British Muslims are on the rise in line with wider society. According to some Muslim commentators one in eight Muslim marriages now ends in divorce, up from one in 20 in the space of two generations, and increasing numbers of Muslims are seeking alternative avenues to meet their future spouses, without compromising their commitment to Islam. They want to meet members of the opposite sex in a halal environment, and no, I don’t mean a date in the local branch of Dixie Fried Chicken.

So they go to Muslim matrimonial websites, “halal speed-dating” and face-to-face matrimonial events to find a husband or wife. Traditionally many second- and third-generation wife- or husband-hunters would expect family and their communities to introduce them to prospective life partners, many even travelling to their parents’ country of origin to view future brides and grooms.

Mizam Raja is the Simon Cowell of the British Muslim matrimonial scene. Raja founded the social enterprise Islamic Circles 10 years ago in east London. Raja employs two part-time staff and receives on average 200 calls a day from men and women seeking his advice on how they can meet a compatible partner. Raja is charismatic, chatty and has an acid tongue that he uses to devastating effect in his day-to-day work. “I’m ruthless with some of them. I have no problem telling a man who has hygiene issues to go home, have a shower and shave and to really think about why he wants to get married and what he can offer his wife in a marriage. A successful Muslim marriage is about yin and yang complementing one another. Marriage in Islam is not about yin and yin.”

Raja says British Muslims have failed to embrace the best aspects of modernity when it comes to marriage and as a result increasing numbers of highly educated Muslim women find themselves part of the “spinster generation” excelling in their academic and professional lives but left out in the cold when they try to find a husband.

Sociologist Fauzia Ahmad from the Institute for the Study of Muslim Civilisations (ISMC) specialises in Muslim women and relationships in Britain. She says Muslim parents and families are realising how difficult it is for their daughters to find suitable husbands and increasingly communities are realising their daughters are facing a backlash from within.

“Contrary to stereotypes, there has been a real drive for qualifications among Muslim women and their families, with one of the motivating factors being the assumption that a degree would help attract a ‘good husband’,” says Ahmad. “While this may be a criteria for many Muslim men, women are finding a mismatch in expectations from similarly educated men, many of whom seem to be intimidated by confident women and know that at the end of the day, their parents can always find them a wife ‘back home’. British Muslim women are less likely to want to do the same. Instead, the initial ‘checklist’ or list of criteria that women used to have become increasingly shorter as the years go by.”

Raja also agrees that Muslim women are facing challenges on the marriage front. “While I believe that many Muslim men are failing to step up to the plate and take responsibility when it comes to marriage, I’ve also met many women who talk down to men as if they are talking to a colleague or a client at work,” he says.

In the past 10 years Raja has organised hundreds of workshop and gatherings for marriage introductions. The events cater for different Islamic sects, Sunnis and Shias, Muslims with disabilities and special needs – the organisation even runs courses for women on how they can become “surrendered wives”. When I ask him if he’s for real he is unapologetic in his response. “If you don’t have a stable family, you can’t have a stable community,” he says. “The events we organise enable people to really work on themselves and think about what marriage is really about. Many of our sisters neglect the idea of marriage because they are too focused on their education or careers. Many find it difficult to compromise and hard to adapt to the role of being a wife alongside being a career woman.”

Raja insists that these matrimonial events offer a more Islam-centric approach to marriage that can’t be found through speed-dating or on matrimonial websites. “Our events are not a place to go shopping for a husband or wife but to fully understand what marriage means in Islam,” says Raja.

On SingleMuslim.com, one of the most popular matrimonial websites used by Muslims surfing to find a partner, users are encouraged to believe they are a few clicks away from reaching their goal of meeting Mr or Mrs Right.

Salma, a divorced single mother in her late 20s used a matrimonial website for a year but has decide to deactivate her account and look at other ways of finding a suitable husband. In one year almost 400 men contacted her online from all over the world to discuss marriage.

“I realised very quickly that men and women were on the website with a shopping list trying to tick as many boxes as they could in as little time as possible and get married,” she says. “A lot of men lie about how much money they have and most of the ones I came across claimed to earn in excess of £60,000 a year, but are unable to write a sentence in English. It just didn’t make any sense.”

Salma discovered some men were already married and looking to find wife number three and four without being upfront about it. “There is no real way of knowing who is genuine and who isn’t. I even had some men contact me telling me to be aware of certain men on the website who were known liars. By trying to find a husband this way I felt like I was drawing a straw or trying to pick out a lucky number out of a hat – it felt like an illusion. In a traditional arranged marriage a woman or a man have the safety net of growing up in the same village, knowing each other’s family for generations. For this reason I’ve decided to adopt a more organic approach to finding a partner and prefer to meet Muslim men chaperoned in an Islamic environment so we get to interact face to face.”