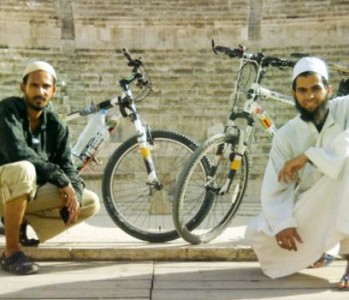 Two young South Africans have pedalled their way to Saudi Arabia to perform this year’s Haj. Nathim Cairncross, 28, and Imtiyaz Ahmad Haron, 25, both from Cape Town, said on arrival at the Saudi border before reaching Tabuk that they felt happy they were fulfilling their dream of performing Haj. “Pedalling our way to the Kingdom from Cape Town was a gruelling experience. We wanted to travel this way so that we are prepared to experience the rigors of performing the pilgrimage,” Cairncross, a town planner by profession, told Arab News over the telephone on Monday night.

Both set out on their journey for the annual pilgrimage on Feb. 7 on their bicycles. They pedalled through Botswana, Zimbabwe, Mozambique, Malawi, Tanzania, Kenya, Turkey, Syria and Jordan before reaching the Saudi border. “This is our first Haj. We could have come for Haj by plane, but it was our cherished desire to travel differently, so we chose to use our bicycles, as cycling is what we both love the most,” Cairncross said.

Both pedalled 80 to 100 km daily and took rest in mosques or tents after dusk and set out again after dawn. “People have been very cooperative and courteous. At every place that we passed through, they welcomed us and were happy to know that we were going for Haj. Food was never a problem as people took delight in offering us the choicest dishes. Of course, it was tiresome to pedal throughout the journey, especially when negotiating mountainous regions,” Cairncross added.

Language was a big problem for both of them. “Once we entered the Arab countries, we decided to pick up Arabic, especially while traveling through Syria and Jordan. This suited us well when we reached the Saudi border where the security officials were very friendly and welcomed and greeted us. They were also happy to know that we have undertaken this arduous journey to fulfil our Haj dream,” Cairncross said. “We came with a very small budget and we found to our delight there were people readily prepared to offer us the local cash and meet our needs.”

Both did not encounter any serious problem on their way through nine countries in the course of their nine-month journey. “All we did was to change tires and tubes, and fix the pedal chain from time to time.

Asked why they chose to ride bicycles, Cairncross said: “This gives us a lot of opportunity to meet and interact with different people in different countries. Additionally, we continued with our Da’wa work wherever we stopped for our overnight stays.”

Both Cairncross and Haron are students of Islamic law and have studied Shariah. “I joined a university and completed a course in town planning and am working in the field of construction,” Cairncross said.

Both of them are single and love sports. While Cairncross is interested in wind surfing along beaches and seas, Haron, an economics graduate, excels in kickboxing and mountain climbing.

After the pilgrimage, both propose to return home via West Africa.