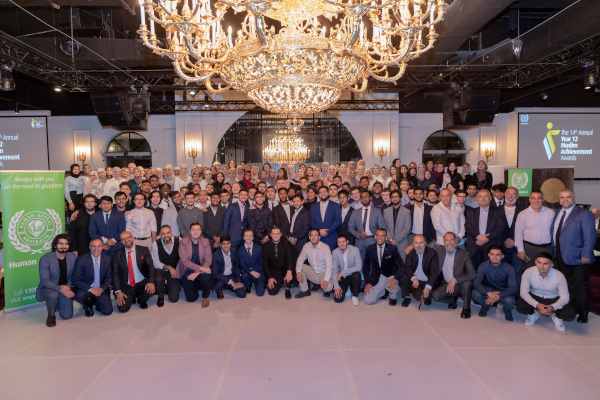 Year 12 students who achieved an ATAR of 90% or above in 2020 were invited to register for the awards. Community leaders, politicians, school principals, businesses and family members attended ceremonies across the nation. An incredible 307 students were awarded for their hard work and received certificates of recognition and valuable gifts.

The five separate ceremonies started off in Sydney, on Saturday the 6th of March. 147 students were awarded on the night. The ceremony was opened with the heart-warming recitation of the Quran by Sheikh Khaled Zrayka and co-MC’d by Omar Al-Jamal and Raghda Assoum.

Students were invited to join various special guests to attend the ceremony which was held in The Highline Venue in Bankstown. Students were honoured for their hard work, awarded certificates of recognition and were gifted an 8th generation iPad.

Human Appeal Australia’s Director, Bashar Al-Jamal welcomed guests then various speeches were delivered by the Hon. Wendy Lindsay, the member for East Hills whilst also representing the NSW Premier and Minister of Skills and Tertiary Education; the member for Lakemba Mr Jihad Dib; Mayor of Canterbury Bankstown Khal Asfour along with a member of Human Appeal’s board of directors Mr Mustafa Al-Omari, and Dr Yassir Zaki from Tender Loving Care Disability Services. Overall, the night was filled with a warm atmosphere of celebration and joy.

On Sunday the 7th of March 2021, the year 12 Muslim Achievers Awards event took place in Melbourne at Laila Reception in Brunswick and was attended by students, members of the community, politicians, school principals, businesses and family members. 81 Students were awarded certificates of recognition and were gifted iPads.

The ceremony was opened with the amazing recitation of the Quran by Sheikh Alaa Elzokm from the Board of Imams of Victoria.

In Brisbane the event was held on Saturday the 13th of March, honouring 36 students at the Michael’s Oriental Restaurant & Function Centre and was attended by students along with their guardians, members of the community, politicians and school principals. The highlight of the ceremony was the heart-warming welcome from Bashar Al-Jamal, Director of Human Appeal Australia. The event has also speeches from Ali Kadri, CEO of Islamic College of Brisbane; Mrs Helen Kenworthy, Department of Education; Dr Abid Majid, Secretary of Islamic Medical Association of Queensland; Habib Jamal, President of the Islamic Council of Queensland; Galila Abdelsalam OAM, CEO of Islamic Women’s Association of Australia and The Hon Cameron Dick, MP, Treasurer and Minister for Investment. The guests were also addressed by the MC of the event Dr Mustafa Ally, OAM.

On 14th of March 2021, 27 Muslim High achievers celebrated their achievement of scoring more than 90+ in Perth. The event that was organized by the team members of the WA branch of Human Appeal Australia, was conducted in Duxton Hotel and hosted the Deputy Mayor of Canning, Cr. Jesse Jacobs as well as the Councillor of Canning Cr. Yaso Ponnuthurai. The highest student in WA Mr. Afiq Abdillah Effiezal Aswadi received an impressive score of 99.85 in his ATAR.

The event was well received by the attendees, where they were accompanied by an engaging program, led by the honorary guest Sheikh Yousuf Parker as the MC of the night. The Program included speeches by some of the VIP guests, which included the City representatives from the City of Canning, the executive principle of Australian Islamic College Mr. Abdullah Khan, the president of the Australian Federation of Islamic Councils Dr. Rateb Jneid, Dr. Naser al-Ziyadat from Murdoch University and Sheikh Wael Ibrahim the Founder of the Aware Academy, mentor and Student counsellor at The Australian Islamic College. Human Appeal Australia in WA awarded Mr. Abdulrahman al-Omari and Mr. Tarek al-Chamkhi a plaque during the event for their outstanding contributions to the communities throughout the years.

Mr. Bilal Ghufran, one of the High Achievers in 2020, gave his speech, where he shared his personal journey during school, thanking the people who helped him and his future aspirations. “My success is due to the people around me who helped me throughout the year. Thank you to my parents, for always encouraging and supporting me in times of stress, to my teachers, who put in their best efforts to help me achieve my goals and my older sister, who motivated me to work hard. After seeing my older sister’s amazing achievements when she was in year 12, I knew that I wanted to strive for the best and work hard just like she did” Mr. Bilal Ghufran said.

Year 12 Muslim Achievement Awards night in Adelaide were held on 14th March at Stamford, honouring 16 High Achievers. The event began by acknowledging the land that we meet on, followed on by a Quran recitation by Sheikh Mohammed Syed.

Human Appeal’s State Manager, Ali Kadir acknowledged the high achievers and outlined the amazing work Human Appeal has been doing over the years, locally and overseas. Followed by The Hon. Stephen Patterson MP, representing the Premiere, who spoke on ethics of success.

Then various speeches were given by Mr Steve Murray MP Member for Davenport, AbdulSalam Hamid Juma, President of Islamic Information Centre and previous Human Appeal Umrah leadership participant and by Sheikh Abdul Salam Alim. The next phase of the night was introducing the Highest ATAR score student who gave an amazing speech about keys to success as a high achiever.

This night was truly a night of celebration where leaders of the community and politicians celebrated the achievements of our amazing Muslim students. Human Appeal Australia would like to congratulate all the Year 12 students of 2020 for their success and wishing them all the best in the near future. This event would not have been possible without our generous sponsors, who have always believed in Human Appeal’s mission and vision, by giving their utmost support to the annual Year 12 Muslim Achievement Awards. Thank you to the generous businesses and organisations who continue to support this iconic event.