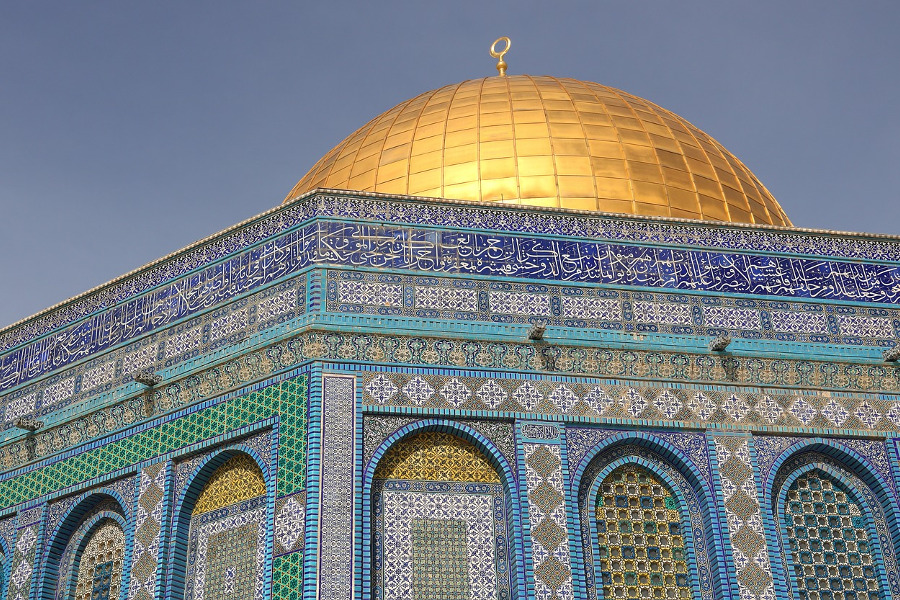 There are some months as well as some places that have more worth in Almighty Allah’s sight than others. But the merit of a certain place or time in Islam is established only through authentic proofs. Hence, on quoting a certain hadith, one is to make sure of its authenticity so that no false hadiths are reported to have been said by the Prophet (peace and blessings be upon him).

Many of the hadiths reported about the worth and merit of Rajab are either weak or fabricated. However, we should remember that there are many important events in Islamic history that took place in the month of Rajab, such as the Night Journey and Ascension (Israa’ and Mi’raj), the Battle of Tabuk, and the liberation of Al-Aqsa Mosque from the crusaders at the hands of Salah Ad-Din Al-Ayyubi. Muslims should recall these great victories and derive lessons from them.

Al-Hafidh Ibn ‘Ali ibn Muhammad ibn Hajar Al-‘Asqalani, an eminent scholar, wrote a detailed study entitled “Tabyeen Al-‘Ajab bima Warada fi Fadl Rajab.” Ibn Hajar included in this study almost all the hadiths reported about the merit of Rajab and the rewards entailed by observing fasting and optional Prayer during it, classifying these hadiths into either weak or fabricated ones.

He also mentioned that Rajab has eighteen names, the most famous of which are these: Al-Asamm (“the Deaf Month”). It was called so because no rattle of weapons was heard during it, it being one of the sacred months in which fighting is prohibited. It was called also Al-Asabb (“the Poured-in Month”), because [it was believed that] mercy is poured on people during it. It was called also “the Iron Remover.” In this regard it was reported that Abu Raja’ Al-?Utaridi said, “We used to worship stones [before Islam]. But when we found a better stone than the first one, we would throw the first one and take the latter. If we could not get a stone then we would collect some earth (soil), then bring a sheep and milk that sheep over it, and perform Tawaf around it. When the month of Rajab came, we used (to stop the military actions), calling this month the Iron Remover, for we used to remove and throw away the iron parts of every spear and arrow during it” (Al-Bukhari).

The merit of Rajab is like the merit of the rest of the other sacred months. Allah Almighty says: “Lo! the number of the months with Allah is twelve months by Allah’s ordinance in the day that He created the heavens and the earth. Four of them are sacred: that is the right religion. So wrong not yourselves in them…” (At-Tawbah 9: 36).

The names of these sacred months are mentioned in an authentic hadith said by the Prophet (peace and blessings be upon him) in the Farewell Pilgrimage. According to this hadith, the sacred months are four, three in succession—that is, Dhul-Qa’dah, Dhul-Hijjah, and Muharram—and the fourth is Rajab, which comes between Jumada Thani and Sha’ban.

According to the above verse, Allah Almighty has ordered the Muslims not to wrong themselves (or others), especially in these sacred months. So no fighting between tribes was to be waged during these months, so that people would guarantee that the way to the Sacred House be safe. This is indicated by Almighty Allah’s saying in another verse: “Then, when the sacred months have passed, slay the idolaters wherever ye find them…” (At-Tawbah 9: 5).

Another manifestation of not wronging oneself in the sacred months is to avoid committing sins or wronging others. Some scholars derived from Almighty Allah’s ordering Muslims not to wrong themselves especially in the sacred months that the blood money paid in the case of killing a person by mistake is to be increased by one third if this act is committed during the sacred months. But it is to be noted that the fatwas of those scholars are not based on direct evidence from the Qur’an or Sunnah.

Observing voluntary fasting in the sacred months, including Rajab, is recommended. In this regard, Abu Dawud reported on the authority of Mujibah Al-Bahilyyah that the Prophet (peace and blessings be upon him) said to her father or uncle, “Observe fasting for some days in the sacred months and leave fasting for other days.” He (peace and blessings be upon him) said this three times, folding three fingers of him and then unfolding them each time. The Prophet’s using three fingers here is meant to assert his recommendation of fasting during these months, and not to indicate the number of the days to observe fasting therein.

Hence, doing good deeds, including fasting, in Rajab is generally praiseworthy like doing so in the rest of the sacred months. According to Ibn Hajar, there is no hadith, whether authentic or good, reported to the effect that observing fasting in Rajab entails a special reward.

There is another long hadith reported in this regard, in the context of which it is reported “Rajab is Almighty Allah’s month, Sha’ban is my month, and Ramadan is my Ummah’s month.” This hadith was said to be fabricated. It was also mentioned in Al-Jami’ Al-Kabir by As-Syuti that this hadith was reported by Abu Al-Fat-h ibn Abu Al-Fawaris in his book Amali as a mursal hadith (a hadith which a Successor [student of a companion] has directly attributed to the Prophet without mentioning a Companion).

Of the fabricated hadiths reported about the praiseworthiness of offering special Prayers during Rajab is this: “He who performs the Maghrib Prayer in the first night of Rajab, and then offers twenty rak’ahs, two by two, reciting in each rak’ah surat Al-Fatihah and surat “Qul huwa Allahu Ahad,” Allah Almighty will guard him, his family, his wealth, his children; he will also be given refuge against the punishment of the grave and will pass over the bridge above Hell like lightening without being brought to account or exposed to punishment (in the Hereafter).”

Ibn Hajar dedicated in the study referred to above, a whole chapter for the hadiths reported about prohibiting fasting the whole month of Rajab. He then said, “This prohibition applies to the person who observes fasting during it out of following the pre-Islamic tradition of sanctifying this month. But if he observes fasting in this month for Allah’s sake without obligating himself to fast certain days from it, or to offer night vigil Prayer in certain nights of it, there is nothing wrong in this. The prohibition meant here is analogous to the prohibition referred to in the Prophet’s hadith ‘Do not single out the night (preceding) Friday among the nights for Prayer and do not single out Friday among days for fasting.’ ”

As for him who observes fasting in Rajab, believing that fasting during it is more praiseworthy than fasting in the other months, this is controversial among scholars, but Ibn Hajar was of the opinion that this is not permissible.

Ibn Hajar also quoted Abu Bakr At-Tartushi as saying in Al-Bida’ wa Al-Hawadith, “It is not recommended to observe fasting in Rajab if this is done out of one of three intentions, one of which is to do so out of believing that its fasting is obligatory like the fasting of Ramadan, or it is a regular act of Sunnah, or that its fasting is more rewarded and praiseworthy than fasting in the other months. If anything of the kind had been true, the Prophet (peace and blessings be upon him) would have clarified it. According to Ibn Dihyah, fasting in general is a good act, but it should not be observed in Rajab out of believing that it entails special rewards then. ‘Umar (may Allah be pleased with him) would not recommend fasting in Rajab out of this belief.”

Muslims should, rather, remember the important events that took place in the history of Islam during this month, such as the Night Journey and Ascension, the Battle of Tabuk, and the liberation of Al-Aqsa Mosque from the crusaders at the hands of Salah Ad-Din Al-Ayubi (AH 538). Muslims should derive lessons from this glorious history, so that they may reunite and seek to liberate Al-Aqsa Mosque anew from its recent brutal occupiers.