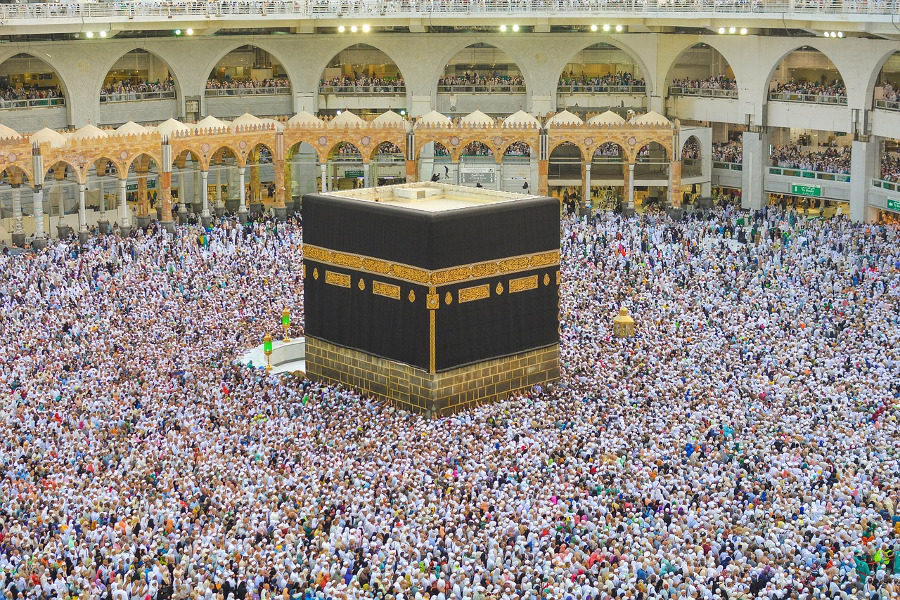 For the first time in five years, hundreds of Palestinian Muslims from the Gaza Strip will be able to perform the religious rituals of Umrah in the sacred city of Mecca, Middle East Eye has learned.

Palestinians in the enclave have been living for more than a decade under a land, sea and air blockade imposed by Israel and Egypt since 2007, which has restricted an estimated 2 million people from freely travelling abroad to study, worship, visit relatives or seek medical treatment.

Following discussions between the Ramallah-based Palestinian Authority (PA) and Egyptian officials, the first convoy for Umrah will set out this Sunday.

Umrah is a Muslim pilgrimage to the holy city of Mecca in Saudi Arabia. Unlike the Hajj, Umrah is not bound to take place at a specific time of the year.

The last time Palestinians from Gaza visited Mecca for Umrah was in 2014, although 6,600 people from East Jerusalem, the West Bank and the Gaza Strip travelled to Saudi Arabia for the Hajj pilgrimage in 2018.

Since 2014, reports have emerged each year that Egyptian authorities would allow Palestinians from the Gaza Strip to travel through the Rafah crossing into Egypt and fly from Cairo to Saudi Arabia.

But each time, Egypt did not issue any permits, citing “security risks” in the Sinai Peninsula, where the Egyptian army have been fighting various armed groups since 2011.

This time, news that the Palestinians will be able to perform Umrah has been fully confirmed, Awad Abu Mazkour, the head of the Hajj and Umrah Agencies’ Society in Gaza, told MEE.

In November, an agreement was made between the PA and Egyptian officials to allow 800 Palestinians per week, a total of 3,200 each month, to travel through the Rafah crossing, for three months until next May.

“We have sent the passports to our agents in the Palestinian embassy in Cairo, who will work to process visas from the Saudi embassy and consulates,” Abu Mazkour said.

“At 8am on Sunday, 800 people will gather at the Rafah crossing, and at 9am the Egyptian side of the terminal opens,” Abu Mazkour said.

“We will travel by buses through Sinai to Cairo, and on the next day, we will board flights to Jeddah and then take buses to Mecca.”

The journey to reach Mecca will take an estimated 48 hours and cover a total of 1,650km.

The most dangerous and risky stretch of the journey will be the 371km on the al-Arish and al-Qantara roads in the north of the embattled Sinai peninsula.

“This route would take us 12 hours by bus to cross because of the security measures in Sinai and the checkpoints,”  Abu Mazkour said.

“In the past, al-Arish and al-Qantara took just five hours to reach Cairo.”

In 2014, attacks on the Egyptian army and security forces reached a high point when 31 Egyptian soldiers were killed in October of that year.

Abu Mazkour said that Egyptian officials told them in 2014 that due to “security risks” they could not guarantee the protection of Palestinian Umrah buses on Sinai’s land, and thus travel permits for Umrah agencies would not be supplied.

On 16 February, 15 Egyptian soldiers and seven fighters were killed in armed clashes in the north of Sinai, an indication that Egyptian security forces are struggling to control the peninsula.

Despite the risks, PA officials will join 18 buses on Sunday that will carry the 800 Umrah pilgrims, who will be accompanied by Egyptian security and army vehicles through Sinai for their protection.

“We understand the risks in Sinai. It is a long convoy of buses, and we need military vehicles to accompany us as they did between 2011 and 2014,” Abu Mazkour said.

Fourteen nights in Mecca and Medina

The Umrah season, which started in September, has been disrupted by a Saudi measure that restricted Palestinians’ right to get visas on temporary travel documents to travel to Saudi Arabia.

The measure was scrapped in January, after nearly five months of a visa ban that affected almost three million Palestinians in East Jerusalem, Jordan, Lebanon and Palestinians inside Israel.

An average of 50,000 to 70,000 people from East Jerusalem and the West Bank undertake the Umrah pilgrimage annually.

Abu Hamza, head of the Honiaf Umrah agency in Gaza City, told MEE that this season’s Umrah numbers would not reach more than 10,000 people.

“I have 500 people who applied. The economic situation in Gaza is terrible. People are eager to go to Umrah, but they can’t afford it,” Abu Hamza said.

“The bus and flights tickets are the most expensive part of the package, an estimated 500 dinars [$705]” he said.

Abu Hamza said that the journeys in March would be each Sunday, on 3, 10, 17 and 24 March. Palestinians would spend 11 nights in Mecca and three nights in Medina.

“After May, in the month of Ramadan, the price is hiked, including flight tickets and hotel rooms,” Abu Hamza said.

Mohammed Hamdan, head of the Diouf al-Rahman Umrah agency, added that a Saudi rule implemented in 2016 requires that anyone visiting Mecca twice for Umrah had to pay a fee of 2,000 Saudi riyals ($533), which would put people off from going to Umrah again this year.

“The price is already high, and $533 is half the amount of the Umrah package,” Hamdan said.