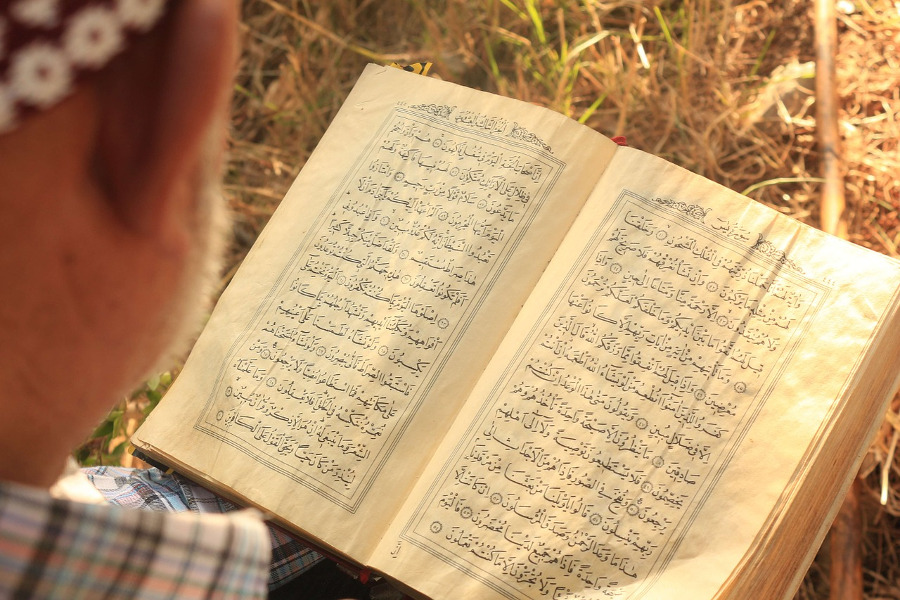 The Prophet Muhammad (ﷺ) received the revelation of the Quran from Jibreel (Gabriel), may Allah exalt his mention, and conveyed it to people as it was revealed to him from His Lord. He urged his companions, may Allah be pleased with them, to learn and memorize it.

A number of companions competed in memorizing and learning it, such as Ubayy Ibn K`ab, `Abdullaah Ibn Mas`ood, Zayd Ibn Thaabit and Mu’aath Ibn Jabal, may Allah be pleased with them. The Prophet (ﷺ) was proud of them and said:

The Prophet (ﷺ) had so admired `Abdullaah Ibn Mas`ood’s recitation that he said: “Whoever likes to recite the Quran as pleasant as it was revealed should follow the recitation of Ibn Umm `Abd.” [Ibn Majaah]

‘Abdullaah Ibn Mas`ood, may Allah be pleased with him, narrated: “Allah’s Messenger (ﷺ) said to me, “Recite (the Quran) to me,” I said: “How shall I recite it to you while it was revealed to you?” He (ﷺ) said, “I like to hear it from others.” So I recited chapter four till I reached (what means):

{How (will it be) then, when We bring from each nation a witness and We bring you (O Muhammad ﷺ as a witness against these people?}[Quran 4:41]

So the Prophet (ﷺ) cried until his tears flowed down his cheeks.

Urging the Muslims to Learn the Quran:

The Prophet (ﷺ) urged his companions, may Allah be pleased with them, to learn, recite and memorize the Quran. The Prophet (ﷺ) used to prefer the memorizers of the Quran over those who had not memorized it. The Prophet (ﷺ) said: “When there are three persons, one of them should lead them in prayer. The one most worthy to lead is the one who is best versed in the Quran.”  [Muslim]

There are many authentic narrations that urge a Muslim to learn the Quran. The Prophet (ﷺ) said: “The best of you is he who learns the Quran and teaches it to others.” [Al-Bukhaari]

The Prophet (ﷺ) also said: “Recite the Quran, because on the Day of Resurrection, it will come as an intercessor for those who recite it.” [Muslim]

The Prophet (ﷺ) said: “One who is proficient in the Quran is associated with the noble, upright, recording angels, so beautify the Quran with your voices.” [Al-Bukhaari]

The Prophet (ﷺ) also said: “The one who recites a letter from Allah’s Book will be credited with a good deed and a good deed is multiplied tenfold. I do not say that Alif, Laam, Meem is one letter, but Alif is a letter, Laam is a letter, and Meem is a letter.” [At-Tirmithi]

How to Recite the Quran

A Muslim should recite the Quran just like the Prophet (ﷺ) used to do. He used to pause at the end of every verse. For example, he would recite (what means): “All the praises and thanks be to Allah, the Lord of the ‘Alamin (mankind, jinns and all that exists)”[Quran 1:1] and pause for a while and then recite (what means): “The Most Beneficent, the Most Merciful.”[Quran 1:2] and so on. He used to recite verse by verse.

A Muslim should perfect his recitation of the Quran and properly pronounce each letter as the Prophet (ﷺ) used to do.

Recitation of the Quran

The best way to recite the Quran is to do it in the same way as the renowned reciters, such as Mahmood Khalil Al-Husari, Mahmood Siddeeq Al-Minshawi and Mustafa Isma`eel, may Allah have mercy on them. These reciters are well-known for the quality of their recitation which depends on reciting verses slowly, without rushing, and at the same time following the rules of recitation and posing at the end of each verse. Allah commanded His Prophet (ﷺ) to recite the Quran as Allah Says (what means): {And recite the Qur’an (aloud) in a slow, (pleasant tone and) style.} [Quran 73:4]

A reciter of the Quran should do his best to beautify his voice, adhere to the rules of recitation, never raise his voice very loud during recitation, and pause at the end of every verse because it is recommended to abide by these rules.

The reciter of the Quran should adhere to the following etiquettes befitting the Word of Allah, the Almighty:

– A reciter should be entirely pure as far as his/her body, clothes, and location are concerned.

In addition to ritual purity, he should use a Siwak (tooth stick) so that his mouth smells nice because the angels (who usually attend whenever the Quran is being recited) are harmed by bad odors when they listen to the Quran.

– The etiquettes of recitation include seeking refuge with Allah from the cursed Satan before one starts reciting, i.e. to say “A’oodh Billaahi Minash-Shaytaani Ar-rajeem”. Then to say Al-Basmalah, i.e. “Bismillaahi Ar-rahmaani Ar-raheem”, at the beginning of the chapter or where one starts.”

– One should stop recitation when yawning, because a reciter is addressing his Lord and yawning is from Satan.

– One should not interrupt his recitation in order to talk to people except in cases of dire need.

Etiquette of Listening to the Quran

There are some etiquettes pertaining to listening to the Quran as there are etiquettes for reciting it. A person who listens to the recitation is, in fact, listening to the Word of Allah, The Almighty, just like the Prophet (ﷺ) listened to it from Jibree (Gabriel), may Allah exalt his mention.  A Muslim should listen attentively to the Quran, with humbleness, and ponder upon the meanings as Allah Say (what means):

{So, when the Quran is recited, listen to it, and be silent that you may receive mercy. [i.e. during the compulsory congregational prayers when the Imaam (of a mosque) is leading the prayer (except Surat Al-Fatiha), and also when he is delivering the Friday speech (Khutbah)].} [Quran 7:204].

Allah further Says (what means): {(This is) a Book (the Quran) which We have sent down to you, full of blessings that they may ponder over its Verses, and that men of understanding may remember.} [Quran 38:29]