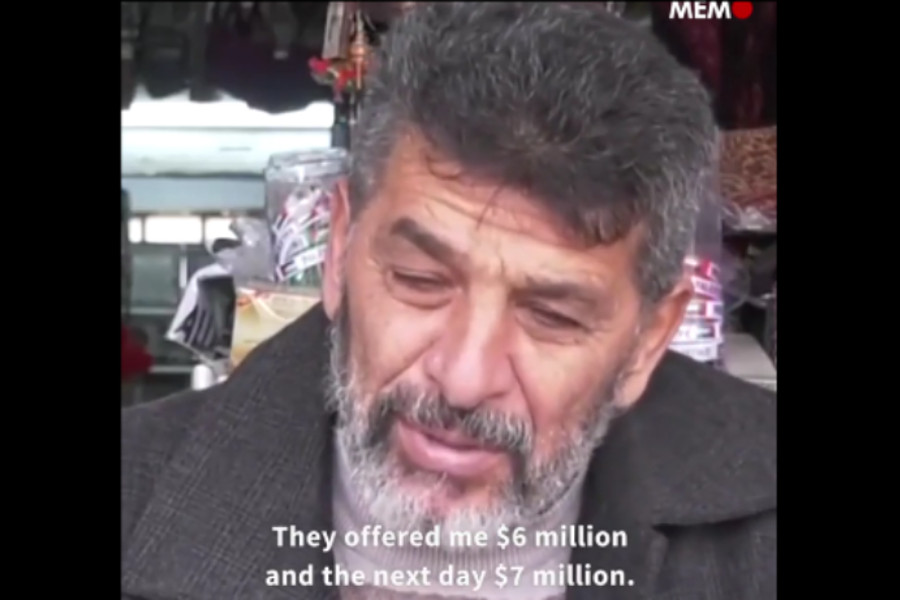 A Palestinian from Hebron has rejected a $100 million Israeli offer to buy his home.

An inhabitant of the West Bank city of Hebron, Abdul Raouf Al-Mohtaseb rejected an Israeli offer worth $100 million for his house and shop, located in the centre of the old neighbourhood of Al-Sahla, Hebron, Arabi 21 reported on Friday.

Al-Mohtaseb has rejected all previous Israeli offers made to him for his house and shop, which overlook Ibrahimi Mosque in the centre of the old city.

“I rejected $100 million,” Al-Mohtaseb said, adding: “I will reject all the money on earth. I will not betray my land or my people. Money is fine, but only when it is clean.”

Speaking to Al-Mayadeen TV, Al-Mohtaseb said that the offers started at $6 million, before rising to $40 million and eventually reaching $100 million. He stressed however that he would not change his position, but rather that he would remain a guard of the Ibrahimi Mosque.

Israeli settlers in the city, he said, had suggested they could facilitate his travel to Australia or Canada to live a new life and found new businesses, but he also rejected this offer.

Al-Mohtaseb stressed that the higher the settlers raise their offer for his house, the more his love of the land rises, noting that he has 20 grandchildren who he hopes will spend their lives in Hebron. “I spent my childhood here, but my grandchildren are deprived of this,” he lamented.

In another interview, Al-Mohtaseb also explained the suffering of Palestinians in Hebron due to the Israeli occupation: “Once, I travelled to Jordan, but I felt so bad the next day and I cut my trip [short] and returned back to Hebron,” he said, stressing that: “However, we are living in a real prison.”

He said that a settler named Boaz once came to him and offered him $30 million for his house. He said that he took Boaz to his house and pointed to the bricks, asking him: “For which brick would you pay the $30 million?” Boaz replied: “I want to buy the whole house.” Al-Mohtaseb replied: “The $30 million is not enough for even one brick.”