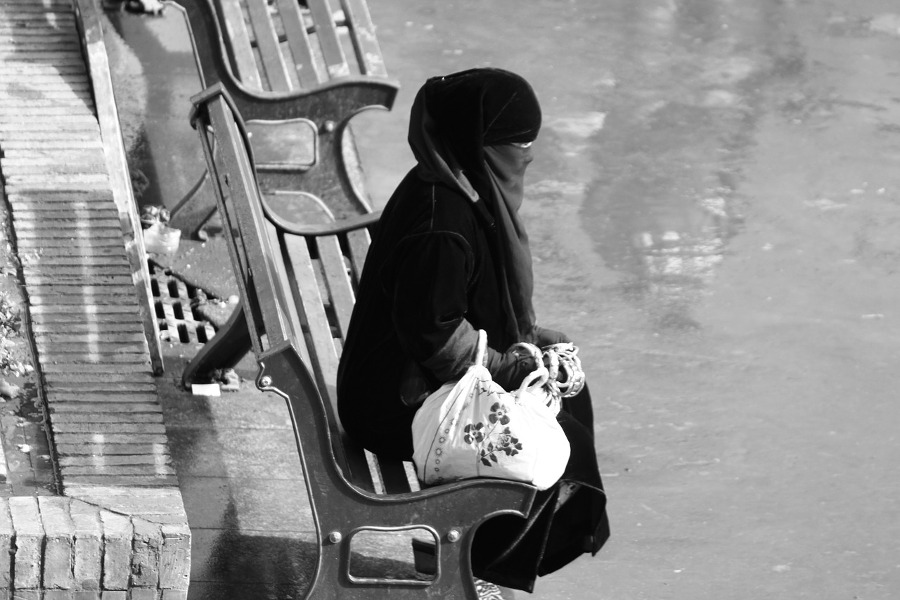 Jarir bin ‘Abdullah (Allah be pleased with him) said:

“I asked the Messenger of God (ﷺ) about the inadvertent glance and he instructed me to avert my gaze.”

Commenting on this hadith, Imam Al-Nawawi (13th century C.E.) says in his explanation of Sahih Muslim:

“The meaning of the ‘inadvertent glance’ is when a man’s gaze falls upon on an unrelated woman, by accident. He does not sin immediately though it becomes necessary for him to immediately avert his gaze. Once that is done sin does not occur. But if he continues looking he thereby sins given what this hadith indicates. This is so because the Prophet (ﷺ) instructed Jarir to avert his gaze in accordance with the command of Allah, Most High, ‘Say to the believing men to lower their gazes…’ (Quran 24:30)

‘This is evidence that the woman is not obligated to conceal her face as she goes about her affairs, rather that is a sunnah that is recommended for her. Instead, it is obligatory on the men to avert their gazes from her in all circumstances except when there is a legitimate, legally-countenanced purpose such as when giving testimony, seeking medical treatment, seeking marriage, purchasing a bondwoman, when buying and selling, and so on. Yet even in those circumstances, it is only permitted to the extent of the need and no more. Allah knows best.'” (Sharh al-Nawawi ‘ala Muslim)

So it may be said that the default position in the Sharia is that, under normal circumstances, men must avert their gazes from women, while women may cover their faces from men.

By normal circumstances I mean in places/societies where both genders generally dress and conduct themselves in a modest and decent manner by the standards of the Sharia. The point is that, in those circumstances, the moral and legal obligation is on men while women need not take extra steps like covering their faces.

Yet in works of jurisprudence we find statements like the following:

“The young woman is to be prevented from revealing her face in the presence of men not because of (issues related to) nakedness but rather due to fear of impropriety (i.e. sexual assault or lust)…” (Hashiya Rad al-Muhtar, Ibn ‘Abidin)

Such directives clearly indicate an obligation on the part of women to cover their faces. That obligation is due to “fear of impropriety” i.e. when the circumstances are no longer normal/decent and might entail sexual assault (الفجور بها) or lust (الشهوة).

The upshot, or life lesson as some say, is that legal and moral responsibility can and does change with circumstance. When society degenerates to the point where men are in fact not modest and decent with women, such that the integrity of women is threatened, it becomes binding on women, as independent legal agents, to protect their integrity by taking measures that would not ordinarily be required of them.

We ask Allah, Most High, to bless us with sincerity in our obedience to Him.

Tags: Allaah delight and sweetness of faith firm and courageous guarding the private parts Ibn Shujaa` al-Kirmaanee illumination of the heart Mutawassimeen perception and penetrating purification and spiritual growth the Mighty and Magnificent Virtue of Lowering the Gaze