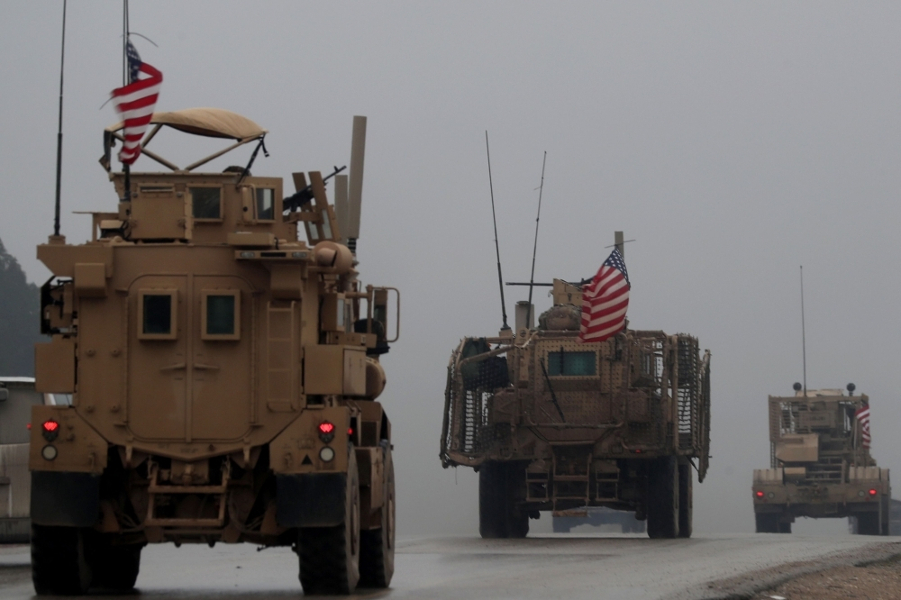 MANBIJ, Syria — The city of Manbij has switched control more than most places in Syria’s civil war.

With US troops set to leave after President Donald Trump’s decision to withdraw them, residents fear others will rush to fill the vacuum, causing more upheaval: Syrian government forces have deployed nearby while Turkey is threatening its own assault on the city.

US forces have underpinned stability in Manbij since Daesh’s defeat here in 2016.

Some 30km from the Turkish border, it occupies a critical spot in the map of the Syrian conflict, near the junction of three separate blocks of territory that form spheres of Russian, Turkish and — for now — US influence.

While US forces have yet to leave, the consequences of Trump’s decision are already playing out in Manbij.

Russian-backed Syrian government forces entered the outskirts on Friday for the first time in years at the invitation of Kurdish YPG militia who fear the US departure could open the way for a Turkish attack.

“We have been living in fear for the past few days and we don’t know what is happening and who will enter the city,” said Ismail Shaalan, 41, who has lived in Manbij since fleeing fighting in the Aleppo area two years ago.

“Is it the Turks or the Syrians?”

Trump has said the withdrawal will be slow. US-led coalition jets and attack helicopters could still be seen in the skies over Manbij on Saturday.

Local fighters with the US-backed militia that has held the city since 2016, the Manbij Military Council, were conducting their normal patrols on Saturday wearing red berets and armed with AK-47 assault rifles.

“We survived the war. We will never see worse than Daesh,” he said, referring to Daesh, said Abu Hamze, 43, a father of five. But he too is worried: “We are scared. The situation is confusing.”

Manbij has changed hands three times since the Syrian conflict began in 2011. Free Syrian Army rebels seized it from President Bashar Assad’s government early in the conflict. Then it fell to Daesh which declared it part of its “caliphate”.

Daesh was dislodged from Manbij in 2016 by the Syrian Democratic Forces (SDF), a militia force spearheaded by the Kurdish YPG and backed by the US-led coalition.

Manbij has been held by SDF-allied forces since then, angering neighbouring Turkey which views the influence wielded by the YPG in northern Syria as a national security threat.

Turkish and US forces have been conducting joint patrols near Manbij since November, agreed as part of US efforts to satisfy Turkish concerns.

Turkish President Recep Tayyip Erdogan said on Friday Turkey would have nothing left to do in Manbij once the “terrorists” leave, a reference to the YPG, which says its forces have already withdrawn from the city.

Turkey says the YPG is indistinguishable from the Kurdistan Workers’ Party (PKK), which has waged a 34-year insurgency in Turkey. It has vowed to crush the YPG with help from Syrian rebel allies, some of whom come from places now held by the SDF and are fiercely hostile to the Kurdish fighters.

Turkey-backed rebels have been mobilising for an attack on Manbij in nearby areas that have been under Turkey’s control since it swept into northern Syria in 2016, part of its effort to roll back the YPG. Erdogan signalled on Friday that Turkey was not in a hurry to carry out the operation.

The YPG, taken aback by Trump’s withdrawal decision, called on Damascus on Friday to protect Manbij.

Shortly afterwards, the Syrian army said it had deployed to Manbij where it would guarantee security “for all Syrian citizens and others present”.

The Syrian troops did not enter the city but nearby frontlines with the hostile Turkey-backed rebels.

A military source in Manbij Military Council said discussions with the Syrian government had yielded agreement on the need to halt “the Turkish occupation of Manbij”.

The Syrian army’s deployment in the Manbij area was so far “partial”, the source said, adding that further Syrian army deployment into the area would take into account the US presence.

As to whether the Syrian state was poised to restore its authority over Manbij, the source said: “Committees will be formed later on about how to administer the city”.

The question of whether the Syrian government will return to rule Manbij is of critical importance to many in the city. One primary concern is fear of being enlisted to the army. Yet the return of Assad’s rule is seen by some as preferable to the prospect of a Turkish offensive.

“People are scared. They disappeared since rumours started circulating that the Syrian army will enter,” said Hussein Khalaf, 30, a fruit seller from Manbij with six children.

“I will not stay here if the SDF left. I will go with them wherever they go. We have adapted to them and we found safety under their rule.”

Yasser Abdulaziz, 31, who fled to Manbij from nearby areas of Aleppo two years ago, said he was tired of war and did not want to be uprooted again with his four children.

“If I have to choose between the Turkish army and the Syrian army I will certainly choose the Syrian army. At the end of the day, they are our fellow citizens … whereas Turkey is an occupying force,” he said.