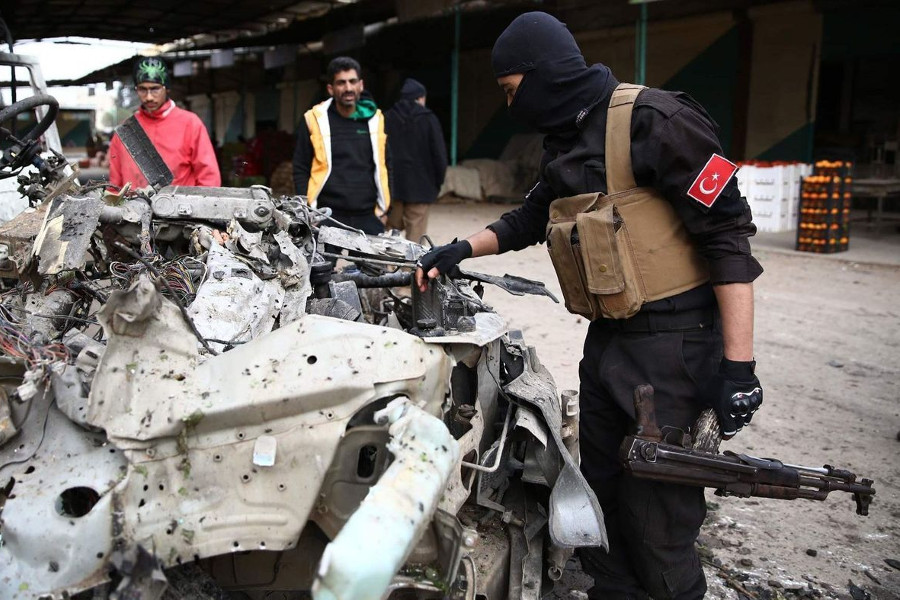 ISTANBUL/BEIRUT – Turkey will take over the fight against ISIS militants in Syria as the United States withdraws its troops, President Recep Tayyip Erdogan said on Friday, in the latest upheaval wrought by Washington’s abrupt policy shift.

The surprise announcement by US President Donald Trump this week that he would withdraw roughly 2,000 troops has felled a pillar of American policy in the Middle East. Critics say Trump’s decision will make it harder to find a diplomatic solution to Syria’s seven-year-old conflict.

For Turkey, the step removes a source of friction with the United States. Erdogan has long castigated his NATO ally over its support for Syrian Kurdish YPG fighters against ISIS. Turkey considers the YPG a terrorist group and an offshoot of the armed Kurdistan Workers’ Party (PKK), fighting for Kurdish autonomy across the border on Turkish soil.

In a speech in Istanbul, Erdogan said Turkey would mobilise to fight remaining ISIS forces in Syria and temporarily delay plans to attack Kurdish fighters in the northeast of Syria — shifts both precipitated by the American decision to withdraw.

The news was less welcome for other US allies. Both France and Germany warned that the US change of course risked damaging the campaign against ISIS, the extremists who seized big swathes of Iraq and Syria in 2014-15 but have now been beaten back to a sliver of Syrian territory.

Likewise, the US-backed militia spearheaded by the YPG said a Turkish attack would force it to divert fighters from the battle against ISIS to protect its territory.

A US official, speaking on condition of anonymity, said American troops may continue to operate against ISIS in Syria. The Pentagon is considering using Special Operation teams based in Iraq to target militants in Syria, the official said.

The official emphasised that using special operators on the ground was one of many options being considered, was still in the planning stages and that no final decision had been made.

ISIS launched an attack on Friday in Syria’s southeast against the US-backed SDF militia, employing car bombs and dozens of militants.

“We will be working on our operational plans to eliminate ISIS [ISIS] elements, which are said to remain intact in Syria, in line with our conversation with President Trump,” Erdogan said.

The Turkish president had announced plans last week to start an operation east of the Euphrates River in northern Syria to oust the YPG from the area that it largely controls. This week, he said the campaign could come at any moment. But on Friday, he cited the talk with Trump as a reason to wait.

“Our phone call with President Trump, along with contacts between our diplomats and security officials and statements by the United States, have led us to wait a little longer,” he said.

“We have postponed our military operation against the east of the Euphrates River until we see on the ground the result of America’s decision to withdraw from Syria.”

Erdogan said, however, that this was not an “open-ended waiting period” and that, due to past “negative experiences”, Ankara welcomed the United States’ statements with an equal amount of pleasure and caution.

Turkey has repeatedly voiced frustration over what it says is the slow implementation of a deal with Washington to pull YPG fighters out of Manbij, a town in mainly Arab territory west of the Euphrates in northern Syria.

The United States will probably end its air campaign against ISIS in Syria when it pulls out troops, US officials have said. Erdogan’s foreign minister said the withdrawal plan would be discussed by the two countries in Washington in January.

‘Time for others to fight’

Trump maintained that ISIS had been wiped out, a view not shared by key allies, that Washington had been doing the work of other countries and it was “time for others to finally fight”.

His defence secretary, Jim Mattis, opposed the decision and abruptly announced on Thursday he was resigning after meeting with the president.

In a candid letter to Trump, the retired Marine general emphasised the importance of “showing respect” to allies that have voiced surprise and concern about the president’s decision.

Russia said on Friday it did not understand what the United States’ next steps in Syria would be, adding that chaotic and unpredictable decision making in Washington was creating discomfort in international affairs.

Several of Trump’s fellow Republicans in Congress, joined by opposition Democrats, urged the president to reverse course, saying the withdrawal would strengthen the hand of Russia and Iran in Syria and enable a resurgence of ISIS.

Trump has given no sign of changing his mind. He promised to remove forces from Syria during his 2016 election campaign.

The roughly 2,000 US troops in Syria, many of them special forces, were ostensibly helping to combat ISIS but were also seen as a possible bulwark against Syrian President Bashar Assad, who has retaken much of the country from his foes in the multi-sided civil war, with military help from Iran and Russia.

ISIS declared a caliphate in 2014 after seizing parts of Syria and Iraq. The ultra-hardline Sunni militants established their de facto capital in the Syrian city of Raqqa, using it as a base to plot attacks in Europe.

A senior US official last week said ISIS was down to the last 1 per cent of the territory it once held. The group has no remaining territory in Iraq, though militants have resumed attacks since their defeat there last year.

ISIS launched an attack on Friday on positions held by the SDF in Syria’s southeast and the US-led coalition mounted air strikes in the area, an SDF official said.

Kurdish-led forces in northern Syria may not be able to continue to hold ISIS prisoners if the situation in the region gets out of control after a US pullout, top Syrian Kurdish official Ilham Ahmed said on Friday.