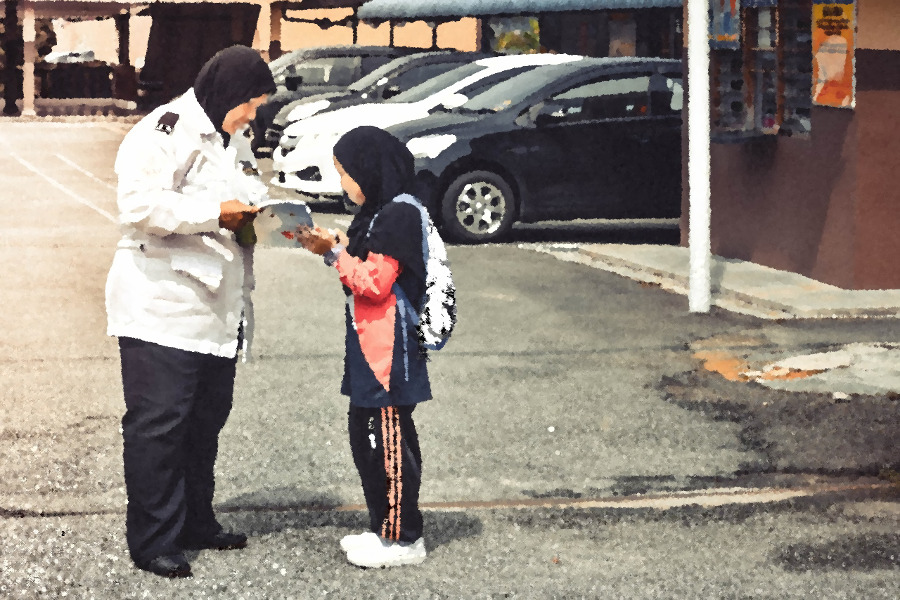 There is an Arabic saying which very concisely describes the importance of respect in a person:

“An Orphan is not one who has no parents; Verily he is an orphan who is deprived of knowledge and adab (respect/etiquette).”

Indeed, when one is deprived of respect and etiquette, one can stoop to a level that any normal human being would consider unthinkable, let alone any person with Faith/iman.

The Qur’an-al-Kareem and Ahadith strongly emphasize the lesson of respect. Respect for the distinguishing signs of Allah Most High – aspects that are clear symbols of Deen such as the Qur’an, the Masjid, the month of Ramadan, etc. – is in itself a testimony of one’s Faith/iman. Allah Ta ‘ala declares: “And those who honour the distinguishing signs of Allah, verily it (this respect) stems from the piety of the heart” (Quran 22:32).

The Messenger of Allah (Allah bless him with peace) also stressed the lesson of respect upon the Sahaaba (Allah grant them mercy) at every occasion. A Hadith clearly proclaims: “He who does not respect the elders amongst us and is not merciful upon the young is not one of us.” Another Hadith states: “Verily it is from the dictates of the respect for Allah Most High to respect a Muslim of advanced age, to respect a bearer of the Qur’an (one who has learnt the Qur’an) who does not exceed its bounds nor does he disregard it and to respect a just ruler.” [Unfortunately, many children become bearers of the Qur’an but disregard it by violating its injunctions.] Among the numerous instances of emphasizing respect, some of them are: Giving preference to the one who knows more Qur’an, standing to welcome an elder, allowing the older person to speak first, etc.

While respect is an integral part of Deen, experience has proven that in any field of life the people who excelled were respectful to their teachers and seniors. Experience has also repeatedly proven that those who are devoid of respect, despite tremendous ability and potential, were largely unsuccessful. Take just one example of an outstanding personality whose excellence was marveled at throughout the centuries. This personality, Imaam Abu Hanifa (Allah grant him mercy), like all others who excelled, was endowed with an unimaginable sense of respect. He states: “I never stretched my legs (even in the privacy of my home) in the direction of my Ustaad (Imaam Hammaad) out of respect for him, though there were seven roads between my house and his (i.e. his house was seven blocks away)!

One of the greatest bounties of Allah Most High upon us is the Qur’an-al-Kareem. The Book of Allah Most High deserves the greatest honor and respect. Among the dictates of the honor and respect of the Qur’an is that the Qur’an should be learnt, it should be recited regularly, and it should also be handled correctly. The Qur’an should always be kept with respect and be carried with respect. Unfortunately, as the level of respect keeps falling in other aspects, the respect for the Qur’an is also being compromised. For instance, many children nowadays carry their Qur’ans to school in their backpacks slung behind their backs. Smaller children have it swinging to and fro from their necks.

The Qur’an is often between other storybooks or school text books as if it was also just another book! The school bag is sometimes lying on the floor with the Qur’an therein! May Allah Most High forgive us and save us from His wrath. This treatment of the Qur’an is a far cry from the manner that even little children handled the Qur’an in the not too distant past. The Qur’an was always covered respectfully and carried close to the chest. The Qur’an left lying in a bag on the floor was unthinkable. Apart from the mishandling of the Qur’an, publications containing the name of Allah Most High or Aayaats (verses) of the Qur’an are also very often found discarded without any respect. The gross disrespect to the word of Allah Most High is the reason for many of our difficulties and hardships. It is necessary that we always handle the Qur’an with the greatest respect and stress the same upon our children.

Another of the symbols of Deen is the Masjid. Hence to honor the Masjid is a sign of Faith/iman. Various injunctions indicate the degree of the sanctity of the Masjid and to what extent it should be respected. Among these injunctions are: One in the state of Janaabat (condition of impurity which makes it compulsory to take a bath) may not enter the Masjid. All worldly talk is prohibited. Bad odors must not be brought into the Masjid. Voices must not be raised. Consider the issue of odors in the Masjid. The Messenger of Allah (Allah bless him with peace) is reported to have said: “The one who has eaten onions or garlic should not attend the Masjid” (until the odor has been completely removed). Thus, those who walk to the door of the Masjid smoking and then enter with the offensive smell of cigarettes, severely compromise the respect and sanctity of the Masjid.

Another aspect is that of raised voices in the Masjid. It is reported in a Hadith that one of the signs of Qiyamah is that voices will be raised (in conversation) in the Masjid. While this unfortunately is common, the most serious breach of the respect of the Masjid in this regard happens after a Nikah. Scant regard is given to the house of Allah. One should be extremely careful in this regard and refrain from all worldly talk.

While respect for elders is fast decreasing in general, shocking incidents that regularly come to light indicate the level to which respect for parents has fallen. The Qur’an declares: “Do not even say to them (parents) “Oof.” The word “oof” in the Arabic language is to denote the slightest degree of displeasure. How can it ever be permissible to talk harshly to one’s parents or to argue with them? Yet, even the unthinkable, that parents are physically abused by their children, is often reported. May Allah Most High save us. Such treatment of parents is to invite calamity upon oneself.

REASON FOR LOSS OF RESPECT

Among the main reasons for the loss of respect is the constant exposure to Western culture through the media. The T.V., DVD’s, magazines, even comics and many computer games, slowly erode the respect of our children. It is therefore necessary that we remove these influences from their lives and introduce them to the life of The Messenger of Allah (Allah bless him with peace), the Sahaaba (Allah grant him mercy) and the pious predecessors. If our children lose respect, Allah forbid – we too could become helpless victims of their gross disrespect. It will then be difficult to reverse the situation. We must act now. May Allah Most High assist us. Amin.