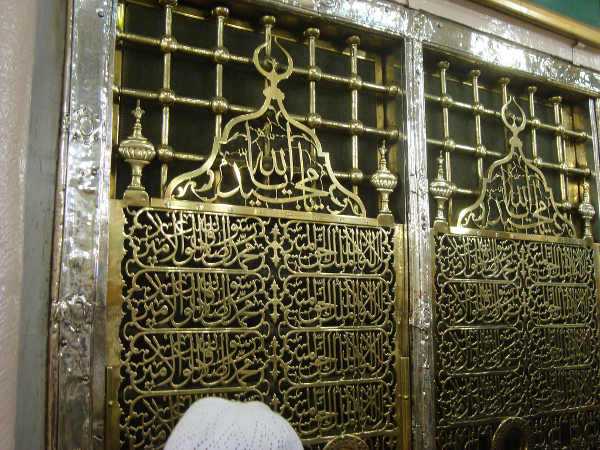 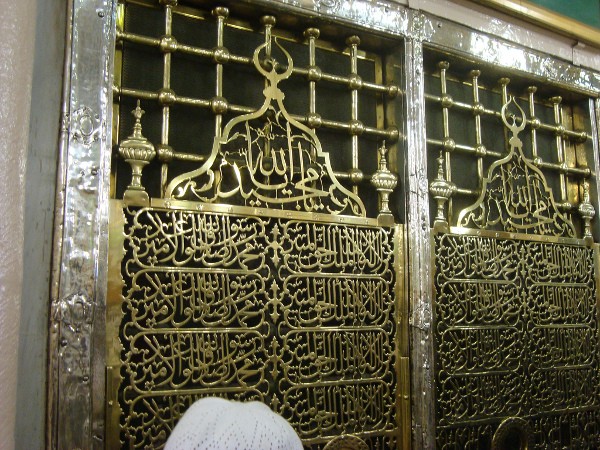 Bism Allah ar-Rahman ar-Raheem, revealer of the Qur’an Kareem that says to His noble Messenger: “And We have not sent you except as a Mercy to the aalameen: all the worlds.”

And as-Salaatu was-Salaamu upon the most noble of the mursaleen (Messengers), our master Muhammad, and upon his family and descendants until the Yawm al-Deen.

I stood one Sunday morning in London’s V&A Museum before three magnificent pieces of silk in the Islamic Arts section. The most wonderful in design and color was a red band from the Honored Ka’bah, dating from the 1800s, because for hundreds of years the Ka’bah’s covering was green – not black – in color, with a red band instead of the gold of today.

The two others were green pieces of the silk that once covered the tomb of the Prophet Muhammad صلى الله عليه وسلم. The first from 1517-1600, and the second from 1600 to 1700. For a hundred years each, these pieces of silk were exposed to all the blessings and mercies that were sent down from Allah upon the Noble Messenger صلى الله عليه وسلم, and to the majestic lights that rose up, emanating from the Light of the Worlds himself, صلى الله عليه وسلم.

Ever since Abbasid times, the coverings of the Honored Ka’bah and the Noble Chamber were made in Egypt; at one point in history the latter was being changed every five years. But after the reign of the Ottomans in the lands, the coverings of the inside of the Ka’bah and of the Prophetic Chamber were made in Turkey, while the outer covering of the Ka’bah remained the work of Egypt.

But the founder of the Kingdom of Saudi Arabia, Abd al-Aziz bin Abd al-Rahman Aal Saud, ordered that a factory be created in Mecca to manufacture these coverings from his day forward. Journalist Omar al-Midwahy, whose writings focus on the two Holy Sanctuaries and other important Islamic sights, was able to interview in Mecca two of the men who worked on the last covering of the Prophetic Chamber and its installation.

On the occasion of this servant’s viewing of the blessed coverings, and hoping for forgiveness and acceptance from His Lord, he will attempt to translate this interview that reveals some of the secrets of the majestic chamber of Allah’s Beloved, صلى الله عليه وسلم, hoping to gain the favor of Allah and to one day be counted among the servants (khuddām) of His Messenger صلى الله عليه وسلم.

The Conversations of Tears and Reverence

I still remember the conversations with the two old men in Mecca, while looking at their weaving. I was in Mecca, so I headed toward the factory of the covering of the Ka’bah, and there I learned that the factory has another honor, for it produces also a covering for the Prophetic Chamber.

I met at that time – several years ago – with men who partook in the production and installation, and I didn’t want to waste that opportunity as their youngest was in his sixties and I feared that they would leave this world before I could document this work.

I recorded with them conversations that were mixed with tears and reverence; sometimes words would betray them, and at others, their emotions would choke them, as they spoke of their unique experience. Their limbs shook from just the memory – as if it happened yesterday – and not a quarter of a century ago.

His sight wandered far, as if he was bringing those treasured memories before him. Then he answered:

“On that day, I felt a state of complete amazement take over me. It is a grand spot – of utmost grandeur. I do not know its exact circumference, but it seemed to me that the Prophetic Chamber was 48 meters in circumference.

“The awe of the place was so overbearing that nothing attracted my attention. I was so dazzled that I only saw the lamps hanging from the chamber ceiling, which were old gifts that would be given to the Mosque of the Prophet صلى الله عليه وسلم in ancient times. I was told that there were some Prophetic relics that were kept in another place – I don’t know where – but I do know that some historical items were kept in the chamber of Sayyidah Fatima al-Zahrā – the same place that she lived in.”

“The chamber covering is a weave made of pure silk, green in color, padded with a strong cotton cloth, and it is crowned by a belt similar to that of the covering of the Honored Ka’bah, except that it is red in color. A quarter of its space is taken up by an embroidery of noble Qur’anic verses fromSurat al-Fath, made of lines of cotton and wires of gold and silver…”

The covering of the Prophetic Chamber is not changed every year like the covering of the Honored Ka’bah, because it is kept inside the chamber and far from the hands of the people and of the elements, and so it is only changed when needed.

Then I met Shaykh Ahmad Sahirty, head of the embroidery division of the factory. It was apparent to me back then how old he was and how weak his vision. He took the initiative, saying:

“How can I speak to you about my feelings at the moment I entered the Prophetic Chamber… I can’t.. That is a speech above my abilities of speech, and I never thought that I would one day be asked about this experience. And I guarantee you that I will not be able to go through it again.”

When the Doors Were Opened

He drew nearer to me and added:

“Look at the lenses of my spectacles – and he pointed at their thickness – and look at my white hair and the weight of the years that I carry. My age I do not count, but I’ve heard them say that I was born in the year 1333 A.H. (1917 C.E.). And in all those years, I did not know a single hobby other than the love of beautiful scents and perfumes. I’ve spent such a long period of time in those years that I’ve lived, trying to satiate that voracious appetite that is still with me. I traveled much and learned much, but I can tell you this with confidence: that I have my own special blends that you will not find with anyone else, and that no one else could ever make.

“And I tell you this because I discovered my inability and the meagerness of my knowledge on that blessed night, when the doors were opened to us, and we entered the Prophetic Chamber, and I inhaled perfumes and scents that I have never known before, and have never known since. I still do not know the secret of its composition: it was a scent above scents, an aroma above and beyond aromas – something else that us people of expertise, the people of the trade, have never experienced before.”

When I asked him to describe to me the Prophetic Chamber, a slight chill struck him and coursed through his body. And he said in a faint voice:

“I believe that the chamber is 11 meters in height. Below the green dome is another dome on which is written:

The tomb of the Prophet صلى الله عليه وسلم,

the tomb of Abu Bakr al-Siddīq,

and the tomb of Umar ibn al-Khattāb.

“And I saw also that there was another tomb that was empty, and next to the four tombs was the chamber of Sayyidah Fatima al-Zahrā, which is the house in which she lived.

“From our awe we didn’t know how to remove the special pieces made for the dome – our fingers would shake and our breaths would race. We stayed 14 full nights working from after the Ishaprayer until the first adhān of the Fajr in order to finish our task. We kept removing the pieces, untying the knots of the old covering, and cleaning all the dust and pigeon feathers that were stuck in that pure place. This scene goes back to the year 1971 C.E., and the covering that we changed was old: it was 75 years old according to the date that was weaved on it, and had never been changed since.

“I was the first to enter, with the Sayyid Habīb, one of the notables of al-Madina al-Munawwara, As’ad Sheera who was the director of religious endowments of Madina at the time, and Habib Moghrabi from the factory management, and Abd al-Karim Flomban, Nasir Qari, Abd al-Rahim Bukhari and others. We were 13 men, I don’t remember most of them, for they have left unto the Mercy of Allah.

“We were accompanied by the chief of the Aghas who kept the keys to the Prophetic Chamber, and a number of the servants of the Chamber. Whispering was our speech, and that was if signaling was not sufficient. I was, and still am, suffering from weakness of vision and these spectacles have not left my eyes since those days, but in that chamber I was another person… I felt it, and the difference was clear to me.”

“I used to put the thread into the hole of the needle without my spectacles, despite the dim light in which we worked. How do you explain that? And how do you explain the fact that I didn’t feel the allergy that I suffered and still suffer from? Because I cough severely from the slightest bit of dust. But that day, I was not affected by the dust of the chamber, or the sand flying into the air. As if sand was no longer sand, and as if the dust became a medicine for my ailment. I used to feel all during those nights that I was a young man, and that youthfulness had been given back to me.

“Another strange thing happened to me whose secret I haven’t understood until today. We had to take out the old covering, and it was carried by whoever carried it. The embroidered band, 36 meters long, remained. I said to them wrap it and leave it. I went up to it, and despite my weakness, carried it over this shoulder. I went out of the Prophetic Chamber with it, without ever feeling its weight. But after that, they came with five young men to carry it from where I had put it down and they couldn’t [carry it].”

The Shaykh began to weep silently and continued, while sighing:

“Someone asked who carried it and brought it here. I replied saying: ‘me.’ They didn’t believe me. I said to them: ‘Ask Abd al-Rahim Bukhari, the famous calligrapher of the covering’.”