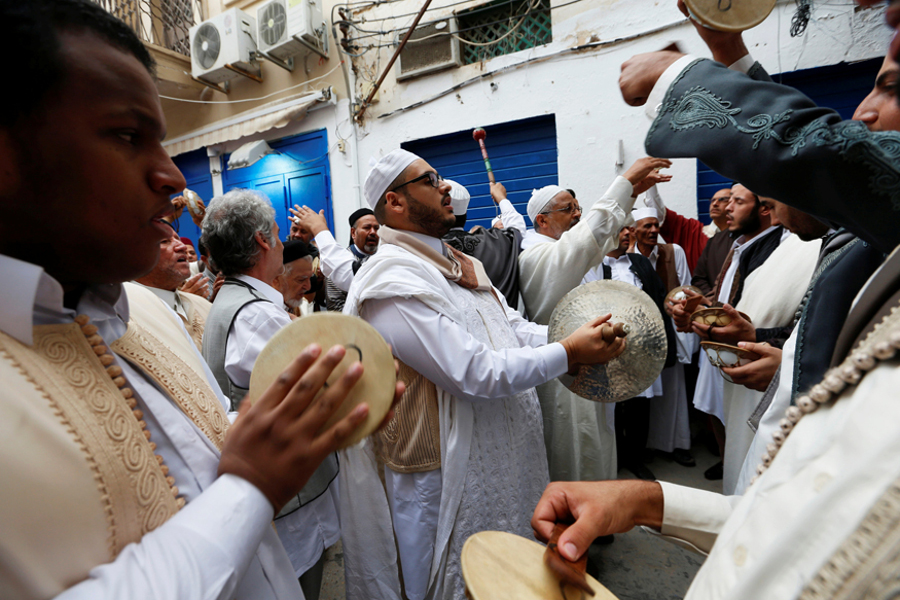 With overt enthusiasm, Libyans openly celebrated Prophet Mohamed’s birthday (the Mawlid al-Nabawi or Miloud) this year, reinvigorating life into an old traditional practice recently prosecuted, silenced and perceived as un-Islamic by some Islamic interpretations.

The Sufi turuqs (orders) have been an integral part and in the forefront of mainstream Islamic traditions in Libya for centuries.

Indeed, long before they were labled as Sufis or traditional Malikies, the Islamic Sufi school has taken pride in overtly celebrating the Prophet’s birthday.

Mawlid organizing Majalis have been composing religious poetry (hymns) and performing  various types of ceremonial rituals, including, food and gift hand-outs to children and the poor.

“As for the Sufi turuqs and Shaykhs, we are ready to celebrate the Mawlid. In addition to civil societies who insist on taking part in the event”. head of the honourable Ashraf (Ahlul Bayt) the descendants of the Prophet) syndicate and head of the Supreme Council of Sufi turuqs in Libya, Ezzideen Al-Shaikhi, told the Libya Herald earlier this week.
“We have coordinated with the security authorities to protect the celebrators and the marching” adds Al-Shaikhi.

This comes on the back of an anti Maulid movement after the 2011 Libyan revolution by non-state militias and religious movements.

Starting in early 2012 Sufi shrines, tombs and libraries were constantly attacked and demolished, and Shaykhs were assassinated and hounded.

The Abdulsalam Al-Asmar Al-Feitouri shrine and Quranic Zawiya in Zliten, 147 Kilometres east of Tripoli, was attacked in August 2012 by a Salafist group.

The shrine was blown up, partly demolishing the Zawia, vandalizing the grave and burning down the library, including  700-year old manuscripts, which UNESCO’s Director-General Irina Bokova condemned at the time.

However, this year, Sufis were ready to openly celebrate the Mawlid and revive a long-craved tradition, with preparations for the day in both eastern and western Libya.

On 8 November, the predominantly Salafists Ministry of Awqaf (religious endowment) and Islamic Affairs in the Beida-based government of Abdullah Thinni issued a statement urging mosque Imams to speak up against the Mawlid celebrations, projecting it as a sheer “Beda” or heresy.

However, this attracted much criticism and ridicule by Libyans on social media. “We are sorry to hear these accusations of Shirk and heresy from the Awqaf and Islamic Affairs. We demand the Interim Government put a stop to them speaking of such dangerous accusations”, said Al-Shaikhi.

It will be recalled that the eastern-based Libyan National Army (LNA) Chief of Staff Abdulrazig Alnaduri gave his permission for the reopening of the Sufi Zawias and schools in April this year.

“We asked the Maj-General Alnaduri for the reopening of the Zawias. He agreed, but the Awqaf and Islamic Affairs Authority opposed the decision and said they are to house the internally displaced in these Zawias instead” said Al-Shaikhi.

“They came with heavily armed vehicles to prevent the reopening and threatened to use violence. We went back to Alnaduri who finally issued another decree that separates the Zawias from the Awqaf and attaching it to the Ashraf Syndicate”, said Al-Shaikhi.

The Hounrable Ashraf Syndicate was founded on 22 June 2016 in Shahat (Cyrene) in eastern Libya.

Sufis and Salafists have had well-documented standoffs in post-2011 Libya.

In November last year preparations for the Mawlid event at one of Tripoli’s oldest Sufi centers and Zawia of the Shaikha Radiya mosque was preemptively thwarted at dawn by unknown assailants.

Widely believed to have been carried out by a Salafist group, they burned down the mosque and its small Quranic school.

Meanwhile, the more miitant Salafist “Mudkhalists” gained a greater role and managed to take control of eastern Libya’s religious authorities and secured a strong footing within the LNA coalition.

They labelled different Sunni schools as “strayed” sects, grave worshippers and “Kharijites”. In the case of the Ibadi branch of Muslims, the form of Islam followed largely by Libya’s Amazigh community, the attack sparked nationwide fury and condemnation in July 2017.

“As for other Islamic trends and schools, like Ibadis, we consider them brothers as we are all Muslims. We hold nothing but love and gratitude for them. We are indeed in contact, as we preach peace and love and equally condemn violence and blood and respect different understandings of Islam”, Al-Shaikhi added.

There are several Sufi turuqs (orders) in Libya, most notably “Al-Essawiya, Al-Qaderiya, Al-Tijaniya, Al-Zarrouqiya, Al-Rifa’iya, Al-Khaliliya and the Al-Derqawiya” states Al-Shaikhi. These sub-schools of turuqs are accredited to Sufi Shaykhs. Unlike Mudkhalis, Sufis are perceived as a non-violent Islamic trend both in historic and modern accounts. Although Jihad philosophy has been a core obligation, mostly devoted to self-defence and directed against colonialists.

Yesterday, the internationally-recognized Libyan government put its official stamp on the Maulid celebrations when Faiez Serraj took part in the event.

The Libya Herald has been providing news on Libya for free since we started on 17 February 2012. However in order for us to continue providing this service and expand our activities, our subscription service started in April 2014, with some of our content restricted to paid-subscribers only.We value the great number of visitors who are regular readers of our site checking our news daily for the latest developments in Libya, so we continue to offer general visitors (non-paid subscribers) access to some Libya Herald content for free.