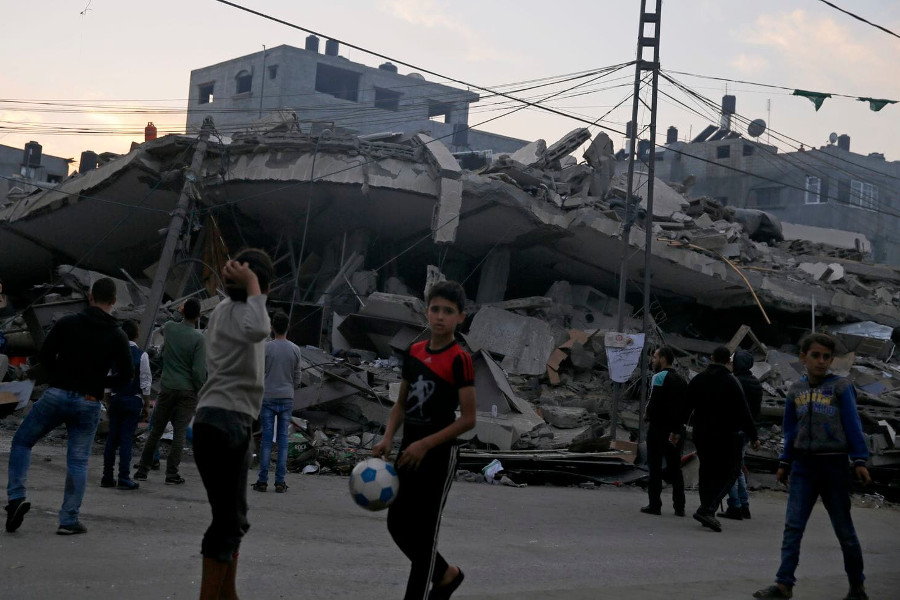 Palestinian militant groups in the Gaza Strip announced an Egyptian-brokered ceasefire with Israel on Tuesday after a severe escalation of violence threatened to descend into full-blown war.

The groups, including Hamas, said in a statement they would abide by the ceasefire as long as Israel did the same.

Israeli Prime Minister Benjamin Netanyahu’s office and the military have yet to comment on the announcement.

But Israel’s hardline defence minister, Avigdor Lieberman, said he did not support stopping the strikes.

“Egypt’s efforts have been able to achieve a ceasefire between the resistance and the Zionist enemy,” the Gaza groups said.

“The resistance will respect this declaration as long as the Zionist enemy respects it.”

Egypt called on Israel to cease its “military action” in Gaza, in a statement issued late Tuesday.

The UN Security Council met behind closed doors late Tuesday to discuss the flare-up at the request of Kuwait and Bolivia.

However diplomats said there was no agreement on how to address the crisis.

One diplomatic source said before the UN meeting that “the situation remains very precarious and can blow up again”.

The violent escalation was the worst between Israel and Palestinian militants since a 2014 war.

Seven Gazans were killed in 24 hours as Israeli strikes flattened buildings and sent fireballs and plumes of smoke into the sky.

Sirens wailed in southern Israel and tens of thousands took cover in shelters as around 460 rockets and mortar rounds were fired from Gaza, wounding 27 people, including three severely.

A Palestinian labourer from the occupied West Bank was killed when a rocket hit a building in the Israeli city of Ashkelon.

‘Restraint must be shown’

Schools were closed in Gaza and in southern Israel as the two sides warned each other they would respond forcefully to any further violence.

Israel’s UN envoy Danny Danon said,“We will not accept a call for both sides to exercise restraint”.

After an Israeli security cabinet meeting that reportedly lasted some six hours Tuesday, a statement was issued saying the ministers “instructed the (military) to continue its operations as necessary”.

The latest round of violence began on Sunday with a botched Israeli special forces operation inside the Gaza Strip that turned deadly and prompted Hamas to vow revenge.

The clash that resulted from the blown covert operation killed seven Palestinian militants, including a local Hamas military commander, as well as an Israeli army officer.

Palestinian militants responded with rocket and mortar fire, as well as an anti-tank missile that hit a bus that Hamas says was being used by Israeli soldiers. A soldier was severely wounded in the attack.

Missile defences intercepted more than 100 rockets from Gaza and most others fell in open areas, though some hit houses and other civilian structures.

“Within two seconds (after air sirens) we heard a huge boom, we saw our curtains flying in the air, windows (broken), and only after a few minutes when we went out, we realised that the missile had hit the building next to us,” said Claude Bonfito, who lives near a block of flats hit by a rocket in the Israeli city of Ashkelon.

The military said it struck some 160 targets in the enclave.

“What happened was like an earthquake,” said Abu Ayman Lemzeni, who lives near the targeted TV building.

At least five of the dead in Gaza were claimed as members of various militant groups. Some 26 other people were wounded in the Palestinian territory, according to Gaza’s health ministry.

The escalation came despite Netanyahu’s decision to allow Qatar to transfer millions of dollars in aid to Gaza for salaries as well as fuel to ease an electricity shortage.

The agreements had led to calmer protests along the Gaza border after months of deadly unrest.

Sunday’s special forces operation and resulting clash upset those efforts, leading to questions over the timing of the covert Israeli move.

Israel said it was an intelligence-gathering operation and that those efforts must continue to defend the country.

Israel and Palestinian militants in Gaza have fought three wars since 2008, and protests and clashes along the Gaza border since March 30 have repeatedly raised fears of a fourth.

At least 234 Palestinians in Gaza have since been killed by Israeli fire, the majority during protests and clashes.

Two Israeli soldiers have been killed over the same period.