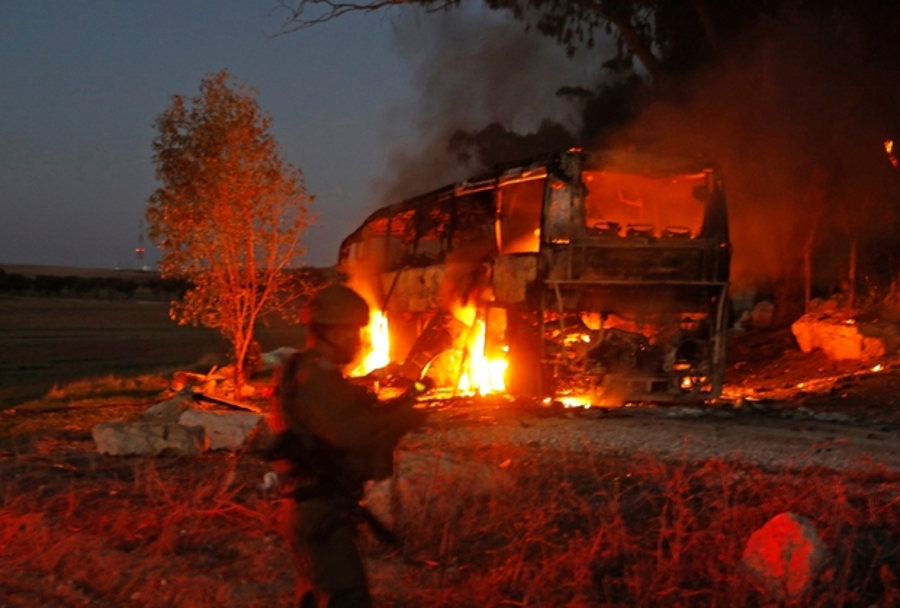 An Israeli bus caught fire, critically injuring one, after being hit by a mortar fired from the Gaza Strip (AFP)

Three Palestinians were killed on Monday afternoon as Israeli air strikes hit the Gaza Strip and Hamas fired scores of rockets from the besieged enclave.

The army reported that more than 200 rockets and mortars were fired from Gaza towards Israel in the span of an hour on Monday afternoon, hitting an unspecified number of homes.

Meanwhile, the army said on Twitter that its fighter jets were launching strikes on at least 20 “terror targets” in Gaza.

The Gaza Ministry of Health identified the three slain Palestinians killed in the afternoon strikes as Mohammed Zakariya al-Tatari, 27, Mohammed Zuhdi Odeh, 22, and Hamad Mohammed al-Nahal, 23. Another nine Palestinians were wounded in the attacks.

Six more Israeli were lightly injured in the southern city of Sderot, according to MDA.

Monday’s violence comes in the wake of a deadly Israeli army ground and air raid into Gaza on Sunday evening, during which seven Palestinians – including a commander from Hamas’ military wing,  the al-Qassam Brigades – and one Israeli officer were killed.

The incident, marking a rare instance of Israeli ground troops being caught entering so far into the Gaza Strip, has sparked fears of an escalation of violence in the small coastal Palestinian territory.

The increased exchange of fire comes despite Egyptian efforts to broker an agreement between Hamas and Israel as ongoing mass protests in Gaza have put pressure on Israel.

Recent weeks have seen Israeli decisions to allow Qatar to provide the Gaza Strip with millions of dollars in aid for salaries as well as fuel to help ease an electricity crisis.

Israeli Prime Minister Benjamin Netanyahu had earlier defended his decision to allow Qatar to transfer the cash to Gaza despite criticism from within his government, saying he wanted to avoid a war if it wasn’t necessary.

Israel has killed more than 200 Palestinians and wounded some 20,000 since the beginning of the Great March of Return more than seven months ago.

Participants of the weekly march’s have called for an end to the crippling 11-year siege of Gaza and the implementation of Palestinian refugees’ right of return.